Home Blogs An appreciation of the maverick genius of Steve Strange 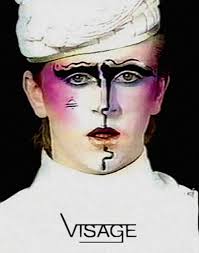 The perfectly named Steve Strange – still retaining his punk rock monicker was the product of times. Willing himself into being a pop star, he was a DIY daydream, a tinselled new romantic day dreamer, a painted face, and a glittering wardrobe in a time when pop stars were outlandish creations – works of art who burst out of the mid seventies monochrome and into the post punk Day-Glo like made up butterflies.

Steve Strange was the perfect epitome of this time.

This was a time when pop stars dressed up and spoke out; unlike now when dressing down and being sensible is the order of the day.

Inspired by glam rock and then fired by punk, Steve Strange was born in Caerphilly in Wales in 1959 as Steven Harrington. He spent time in Rhyl before moving back to South Wales in the nervous breakdown of the seventies UK. He was a Welsh Valley dreamer who ended up as one of the few at the Sex Pistols famous 1976 gig at The Castle Cinema in Caerphilly dressed in bin liners and safety pins surrounded by the battered rainwear and dragging jeans of his contemporaries.

A day dreamer, a peacock strutting through the rain swept streets of broken hearted South Wales, Steve Strange was only going to go one way.

The gig is the one filmed in the Sex Pistols film ‘The Filth And The Fury’s with the band looking at the christian choir singing songs at them in the dark and gloomy streets before playing a great show inside to about 20 kids including the young Strange sat in the dusty and now demolished cinema.

Desperate for escape he befriended the Pistols Glen Matlock, and then JJ Burnel of the next band in town, The Stranglers before heading to London to work for Malcolm Maclaren, and being part of press hype band the Moors Murderers who were one outrage too far despite containing some real talent in their line up including the like of Chrissie Hynde.

If pop had given him the dream, punk had given him the route out and by 1977 he was in London living in the notorious flat of JJ Burnel and Billy Idol and Wilko Johnson; a small space full of wild characters and one of the boltholes of the punk wars. There’s a great photo of him selling Adrian Thrills ’48 Thrills’ fanzine at Generation X’s debut gig in Manchester in 1977 – another lost kid living the dream.

Punk meant many things to many people and for Steve Strange it was a chance to indulge in his peacock dreams. In the shattered ruins of post punk he drifted in and out of the Photons like a piece of punk rock driftwood looking for somewhere to cling to.

He then formed the band Visage with then Rich Kids members Rusty Egan and Midge Ure and Magazine members Barry Adamson, John McGeoch and Dave Formula. At roughly the same time he created the Blitz Club in Soho with Rusty Egan- a space for dressing up to a futuristic glam soundtrack and helped to create the New Romantic scene – one of the many freak scenes that appeared after punk.

This was a springboard for his own pop career. His biggest hit as Visage -as Fade To Grey- a haunting electro pop piece and slice of classic melancholic ethereal pop that shimmers and floats like its singer. He also appeared in the Bowie ‘Ashes to Ashes’ video when the dame came back to reclaim the New Romantic movement as his own with a fantastically dressage video filmed on the freezing cold beach at Southend.

That sort of DIY home grown whilst reaching for the stars that is so curiously and brilliantly British was also such a part of Steve Strange’s own style.

His post pop career was the usual bumpy ride of drugs, rehab and salvation and TV comebacks. I met him once at an event at Southampton university where he turned up still immaculate made up and where he was opinionated, bitchy, funny and fantastically loopy his PA looked exhausted.

You could see why but then, what is the point of pop without these kind of mad, bad and dangerous characters, these poets of the apocalypse?