Home Blogs An appreciation of the Dead Kennedys (sparked by new book on the... 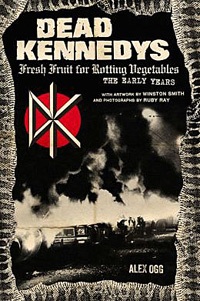 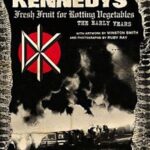 The new upcoming book about the Dead Kennedys by Alex Ogg (Buy it from here ) made me think about this band again- the brilliant band who ,whilst never broaching the ramparts of the mainstream like the Sex Pistols, were almost as catalytic and mixed a musical brilliance with a fierce energy and snarky wit that sounds as fresh today as when it was first released.

The Dead Kennedys tale is as complex and contradictory brilliant as any journey through punk rock can be with their tight knit musical brilliance and their acidic commentary on the bedenimmed neo liberal consensus of late seventies America as bared as ever but ultimately doomed as they all ended up in the stinking rancour of the courtroom.

The genesis of the band was in the confusion of the punk rock Big Bang where they somehow created their own quite brilliant sound within the tight fit constrictions of the punk rock template. Where most other bands were taking the Ramones three chord ramalama as their starting point and missing out the band’s gonzoid bubblegum genius the Dead Kennedys were far more musically inventive but still a thrilling’ visceral musical assault.

Who this was down to is still very much a moot point as the famous rumbling court case between Jello Biafra and his former band mates proves. This unseemly squabble seems to grate against the band’s initial idealism but, as every former young rebel knows, being idealistic don’t pay the bills and the DKs, despite their punk rock politic, sold an awful lot of records and everyone deserves to get paid- just how much is the problem.

The band sparked into existence when Biafra left his home town of Denver as a wanton hippie hating, some time roadie with a headful of toxic genius and brilliant ideas. Colliding with East Bay Ray and Klaus Fluoride the core of the band was born and somehow this combination of the helium voiced genius acidic political wit of Biafra and his band mate’s musical prowess quickly invented something quite stunningly original and brilliant.

The first two singles Holidays In Cambodia and California Uber Alles set the band’s own agenda- lyrically dark and laced with a quixotic, sulphuric humour and sung with a distinct voice the claims of ‘Crass with a sense of humour’ were easily underlined and the band were a big hit very quickly. Musically both singles showed a bass driven diversity with that switchblade surf guitar that was the DK’s signature sound that allowed the rampant imagination of Biafra to explode into the two singles that combined a feral raw power with a taut, sinewy intensity and an almost Beefheart love of the twisted to mash together showcased in an almost bubblegum pop sensibility.

Punk now had yet another spokesperson except this one would just not shut up and Biafra’s natural ability to take on the mantle of sneeringly hilarious yet barbed brilliant political wit was perfect for the times and was part and parcel of the band’s schtick.

With Ronald Reagan at the helm America was about to lurch to the right providing plenty of ammunition to the high IQ young gunslinger and the barbs came thick and fast.The bands debut album, Fresh Fruit From Rotting Vegetables, was a jamboree of smartly funny songs that set out to offend everyone to make the band’s point. The musical invention was mind blowing and there is not a wasted note on the record with the bass and guitar entwining in endlessly brilliant reinventions of the form and structure of the so called punk rock song creating distinct atmospheres and moods for Jello to deliver his sardonic lyrical grenades over like on Kill The Poor and Lets Lynch The Landlord – titles that summed up Biafra’s hilarious way of making the point.

Everyone was getting it in the neck from the super smart singer whose one man assault on the USA was as funny as it was deadly serious and over the decades has only proved to be leeringly and pithily correct as he documented the sleep walk into a big brother state without anyone noticing or caring. Of course many of these themes were present in so much punk rock but so rarely can they have been so cleverly stated and so intentionally funny with those twisted and dark barbs sticking each time.

If the Ramones had kick started punk rock in the first place it was the Dead Kennedys who sparked the Americans scene a few years later. For sure there had been a whole plethora of US bands like the Germs and the Misfits but these were little known outside their small local scenes and it was the DKs not only started to usher punk into a new phase but also sparked interest in the US punk underground that had been minimal before.

Heralding the emerging hardcore scene the band release the In God we Trust mini album- a record of fast thrashing songs that typically they crammed a fantastic musicality to. The album was throwing its word grenades everywhere from organised religion to Neo Nazis, President Ronald Reagan, the pesticide Kepone, and the pre neo cons that was soon dominate America and the world agenda.

Plastic Surgery Disaster was the band’s second full album and is perhaps their masterpiece with their music stretched to incorporate many atmospheres from Forest Fire’s incendiary thrash pysch to Moon Of Marin’s haunting beauty. It felt like a flowing and diverse statement from a group at the peak of its powers with a breath taking diversity but always a commitment to the high energy of the scene that had birthed them

Frankenchrist continued this musical exploration but was overshadowed the court case over the artwork on the sleeve – the band’s use of the late HR Giger’s Penal Landscape was always going to come with an element of trouble- I guess that’s why it was used but not quite the avalanche that came their way with the full force of the loose confederacy of right wing bible bashers and liberal do gooders combining as the moral majority and taking the band to court. Biafra was perfectly placed to become a spokesperson for those against this new wave of censorship and was everywhere for the next two years either in court or in the national media railing against the nu-censorship in its many forms

The case took its toll on the band though and by 1987 they limped into the studio to record their final missive Bedtime For Democracy that saw them rail against the nightmare new world of Amerikkka that was quickly matching Biafra’s sweatshod nightmarish vision. The terror in the lyrics was matched in the music that belied a so so production with those big eighties drums sounding awkward in the band’s rasping assaults to bite back with its fetid imagination and spooked brilliance. As a musical force the band were still moving with those surf guitars never sounding so terrifying and their sense of space and dynamic influenced by film soundtrack textures but still within the abrasive power of punk rock.

It seems a shame that this was the full stop on the band. There was still plenty of good work to still be done musically and artistically from the group but the stresses and strains of the past few years were too much for anyone to bear and they fell apart. Jello went onto a successful spoken word career and a varied musical portfolio with endless projects with his recent Guantanamo Bay band being his best since the DKs (not withstanding the brilliant Lard – I interviewed Biafra and AL Jourgensen in the studio in Chicago at the time and will post this on the website at some point). The rest of the band reconvened in 2001 with a different singer sparking the notorious court case and the current state of limbo with both sides staring down the barrel of the gun which is where the Dead Kennedys currently stand.

Their legacy, though, is far greater than the fallout. Musically these records are some of the finest ever and proof of just how inventive and brilliant punk rock can be when it’s in the hands of musicians like these and scurrying and impatiently thrilling vehicle for the imagination of someone like Jello Biafra- a unique and dangerous individual.