Home Blogs An appreciation of The Cure

The Cure – where are they now?

Opening Spotify recently I was surprised to see a new single by The Cure being plugged on the home page. Yes I knew the band had scaled back down to a trio, but the boys were looking a little more youthful, street and, well, black than usual, and ‘Let Me Tell Ya What Ya Don’t Know’ seemed a fair way from The Funeral Party as a song title.

The real shock, of course, was that the melodic mopesters – founder members of the 80s alternative genre and STILL GOING STRONG thank you very much – are sufficiently off the radar for another band to have appropriated their name. A young, American hip-hop band, sure, so probably not a lot of crossover, but they’re presumably unaware that the name’s taken – despite the large stadium tour and top 20 chart position that accompanied the real Cure’s last album in the States.

If the discovery made me sad it also increased my desire to write a piece like this, and flag up that the band I’ve loved for nearly 25 years is still out there. When I went to see them at their most recent UK show, in 2009, my mum thought the O2 was a long way to go for an eighties night, and few of my contemporaries seem aware that (allowing for a four-year hiatus between albums) the band have continued to release new, often engaging material in the almost 20 years since their commercial peak.
Starting out as junior members of the post-punk sound of the suburbs.

The Cure’s stripped-back first album was quickly followed by three more that were increasingly atmospheric and tortured. But Robert Smith’s ear for a tune, which had already delivered Boys Don’t Cry, never disengaged, and for all their Banshees and Joy Division influences there was always an accessibility within the angst. If you’ve ever heard a stadium crowd sing the guitar intro from Seventeen Seconds’ Play for Today, you’ll know what I mean.

Smith famously put all his eggs in the pop basket after bassist Simon Gallup departed in 1982, releasing a trilogy of quirky sing-along singles culminating in the jazz-infused The Lovecats. Blissfully elevated moments also punctuated 1984’s much darker The Top, and by the time Smith had (re)assembled a full band for 1985’s The Head on the Door he could have patented his combination of twisted pop and brooding sadness.

The widely acclaimed albums of the band’s peak period – The Head.., Kiss Me Kiss Me Kiss Me (1987), Disintegration (1989) and Wish (1992) – need no further promotion here; if you don’t know them please minimise this window, open Spotify yourself and sort it out. Sadly the release that followed that career-making run (and a mini band-meltdown that saw the loss of guitar virtuoso Porl Thompson, expert drummer Boris Williams and [temporarily] Gallup again) was undeniably a bit of a mess.

To this day, many fans mock 1996’s aptly-named Wild Mood Swings, and I was certainly pretty disconcerted at the time. Its yearning opener Want, like an angrier take on Disintegration’s Homesick, promised a meatiness that was quickly belied by a bevy of lightweight, brass-ridden pop, which sounded forced and – even then – dated. These days, though, I can find merit in the second disc once the unlistenable Round and Round and Round’s out of the way: the undulating Gone, wistfully nihilistic Numb and Trap – a spiky tirade that could sit easily on the band’s mid-80s albums. Plaintive closer Bare once again recalls the poignancy of Disintegration.

2000’s Bloodflowers, however, was far more convincing. As melodious and beautiful as it is melancholic, Smith later labelled it the third in a ”Ëdark trilogy’ with 1982’s Pornography and Disintegration. Out of this World picks up where WMS’s Bare left off, launching an album that delivers the depth missing from much of its predecessor. Even the most upbeat track, Maybe Someday, sounds heart-felt, yet there’s a simultaneous lightness of touch throughout. Again, the final tracks drop clear hints about the next album in line; 39’s waves of heaviness reflecting Smith’s anguish that, nearing 40, he has little left to give.

If Bloodflowers is everything many fans want from their Cure, however, that’s not because it breaks radical new ground, and by 2004 the band seemed to be having something of an identity crisis. The signs were all there: a self-titled album, sackings, the adoption of a much noisier guitar sound from a returning Porl Thompson and the appointment of nu-metal producer Ross Robinson. At the time I was fairly thrown by it, and the band’s headline slot at that year’s Manchester Move Festival is a personal low in terms of memorability.

Retrospectively I didn’t give ”ËThe Cure’ a chance. Jettisoning an arguably dated keyboard sound and recorded live in the studio, the album’s rich production makes each song brim with feeling. As on WMS, opening track Lost builds a mood of desperate frustration but this time it’s maintained, through Labyrinth and even the more upbeat third track, Before Three. In fact, only singles alt.end and The End of the World surface anywhere near classic Cure pop territory, before we crash into the abyss once more.

Regrettably, things do lose their way with the Freudian I Don’t Know What’s Going On, and, for me, don’t regain it. And it wasn’t until four years later, when I made the inevitable trip to London for the sole UK show on the tour for the following album, that I was jolted into realising how great the band still were. Teething troubles with the new album, which was still incomplete despite the entire US leg being rescheduled, meant the tour became something of a career retrospective, with beguiling tasters of the new material thrown in. The band’s guitar-fuelled performance of its back catalogue was energising and intensely moving, and the new material sounded just as good.

When it finally appeared in October 2008, many fans hailed 4:13 Dream as a return to form ”â perhaps even the post-Wish album we’d been waiting for. Okay, the production’s pretty painful; but Underneath the Stars swirls and spirals like Disintegration’s long-lost daughter, while irresistible singles The Only One and Freakshow seemed designed for the Tim Pope video treatment that helped make the band famous (sadly, they didn’t get it). The growling menace of the previous album is sustained and refined on many tracks but my highlights are Sleep When I’m Dead’s bouncing bass, and The Hungry Ghost – an anti-materialist diatribe set to the riff from Ride’s Vapour Trail.

Unfortunately, the release went largely unnoticed in much of the wider world. In the UK what would once have been radio-friendly singles received little airplay and the album peaked at 33, despite generally positive reviews and the NME’s conferring of its God-like Genius award. I evangelised to friends but there was clearly little awareness or interest: “The Cure? Have they got back together?”Â Having eschewed Smith’s plan for a double album and contributed little obvious marketing support to the release, the band’s label, Universal, dropped them.

Splitting up years ago, before returning with a nostalgia tour and perhaps the exact same new album, would probably have done The Cure a lot of good in this country. As it is, Smith and his mix-and-match cohorts have plodded on beneath the radar since their salad days, all but imperceptible to non-fans.

Part of their cloak of invisibility, at least in Britain, has been Smith’s apparent refusal to acknowledge the band’s reduced popularity and scale-down its target venues ”â preferring to play a single, un-sold-out stadium show in London. No longer considered headliner material The Cure also disappeared from the UK festival scene, until it was announced that they would headline a single European festival, Bestival, in 2011. This April they also announced a pair of shows showcasing their first three albums at Sydney Opera House, for which old-boy keyboardists Lol Tolhurst and Roger O’Donnell were re-recruited.

Three years after their last album, and with no rumours of another, is the nostalgia circuit beckoning to Smith at last? Perhaps, in this new age of triumphant, credible revival shows by everyone from Adam Ant to Suede, it’s no longer any disgrace if it is. Smith’s recent recording outings, as guest vocalist on releases by Crystal Castles and JapStars, have been enjoyable but bittersweet pleasures for the hopeful Cure fan, but if this kind of activity brings them new and larger audiences maybe I should be happy. As far as I know no Glee covers are planned.

I’d be mad to claim that today’s Cure are as relevant, or even as good, as they’ve ever been. But your first true musical love is like any other, it never dies, so the apparent lack of interest in the band’s later work pains me. Artists as diverse Interpol, Bloc Party, Red Hot Chilli Peppers, The Drums and Franz Ferdinand wield the group’s influence but, for as long as it’s an option, I’d rather have the real thing. So if you’ve ever loved The Cure why not give 4:13 Dream a listen, maybe even buy a copy? If we show them enough love they might just make another one. 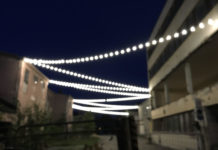 Tallinn Music Week – A Memory for a Possible Future

Stone Roses/Shane Meadows Doc to be called ‘Made Of Stone’

The Damned – An Appreciation

August 7, 2013
We use cookies to ensure that we give you the best experience on our website. If you continue to use this site we will assume that you are happy with it.Ok