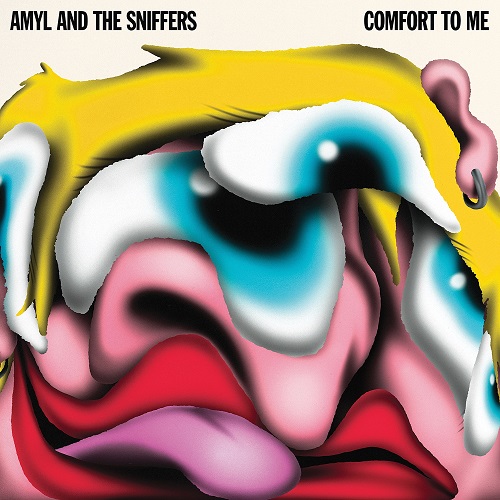 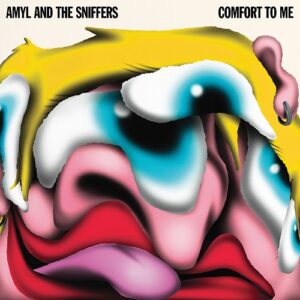 Amyl And The Sniffers: Comfort To Me

Amyl And The Sniffers return with a fantastic new album that really sees them flexing their sound, upping the intensity and delving into the personal.

On their debut album, Amyl And The Sniffers were the mutts that couldn’t be muzzled, underdogs thrown into the ring, full of pent up sinewy energy that spat out out adrenalin-fused honed attacks. Now they’re back, leaner, more muscular, stalking with a beefed-up sound that focuses with an intense gaze that propels Amy Taylor’s vocals to the fore. It’s everything that the band were promising through their first EPs and that great debut dialled up and doubled down on. But through the vehemence, there are moments that feel more personal, a looking glass to the internal, the expression of a desire for acceptance heard in many great punk songs. On Comfort To Me, Amyl And The Sniffers expertly walk the tightrope between a passionate in-your-face battering of resistance and an introspection held together by a cracking hardened exterior.

They kick off with Guided By Angels, a rolling bass and drum rhythm, a sparse and simple guitar that builds under the vocals, the song powering forward through an almost post-punk sound, cathartic brutalism that layers up. It threatens to explode but never does. Pent up, internal energies sparring. It’s an expression of the last year and a half for many and cleansing in its release. That explosion comes quickly on the following Freaks To The Front. Two beats and it rockets right in, Amy calling for personal space while kicking up a riot at the same time. The band fire in through the choruses, unified chants that will no doubt bring the pits together when they hit the road.

Choices strikes a more hardcore vibe, a spinning and dizzying Circle Jerks racket that drops down into a deep menace that gives a false sense of respite before the band return to batter the senses. It’s on moments like this, Capital, and on the fantastic Don’t Need A Cunt (Like You To Love Me), according to the band the best track on the album, where they are channelling the pure punk rock energy that grabs you by your sweat-drenched collar and throws you to the floor, the latter stomping its bastardised 12-bar blues all over your face.

Forthcoming single Hertz is a definite high point and shifts the tone with its pumping chorus-laden bass. It’s a pure joyful floor-filler with Amy showing her rap influence as she spits out the lyrics that revel in the escape that the band has afforded her over a stripped-back disco-punk beat. Dec Martens’ guitar wails in to tether the metal to the groove. They come back to it somewhat on Don’t Fence Me In, the spaces allowing the hooks to dig deep. What makes this album something else is the clear confidence that the band have in themselves to flex their muscles and spread their wings more. They know what they’re doing and have total control.

Where Security punches an emphatic defiant fist in the air, a song that under the surface is one of sought acceptance, the wonderful No More Tears spreads out with more space and turns that mirror to the inside. “Wish I could love me for all of my flaws like I love you for all of yours…/ I can see you see through me, thank you for carrying all of my weight…/ One way or another I find myself slipping under / I can feel myself building up a bit of a callous, I thought I was tough…No more tears left to cry.” The rising ringing chords, the openness of the lyrics, an unexpected candour that comes out of the chaos, the whole groove of the song makes it one that stands out from the battle-cry punk barrage and, coming after Hertz, quickly asserts that the band are growing, mapping future avenues to explore.

Knifey drops back off the pace completely, a brooding bassline underpinning almost mournful lyrics that lament the inability to simply get home safely at night, fight or flight response kicking in. “All I ever wanted was to walk by the park / All I ever wanted was to walk by the river, see the stars / Please stop fucking me up / Out comes the knife / Out comes my knifey / This is how we get home nightly / Please, because you’ve been fucking with us”. It contrasts with the pure defiance and no-shits-given attitude of Laughing and shows how the band, both musically and lyrically, are stretching themselves within the confines of their own style.

On their new album, Amyl And The Sniffers have stripped out some of the bedlam in favour of a sound that menaces more than attacks at times while still retaining plenty of bark and bite. Gus Romer’s bass stalks the album throughout, pegged tightly to Bryce Wilson’s beats. Together they set the course, allowing both Amy and Dec the free rein they need to fly out. It’s no surprise in our interview with the band that Dec highlighted the influence of The Radiators. The change in tack has allowed him to explore a simple shift in tone and style that, when not powering along in unison with Gus and Bryce, allows for a breath that gives the songs more dynamics, all the while Amy is shadowboxing, winding the spring to deliver a barrage of timed blows.

Comfort To Me is an absolute triumph.

Comfort To Me is available here from Sister Ray.