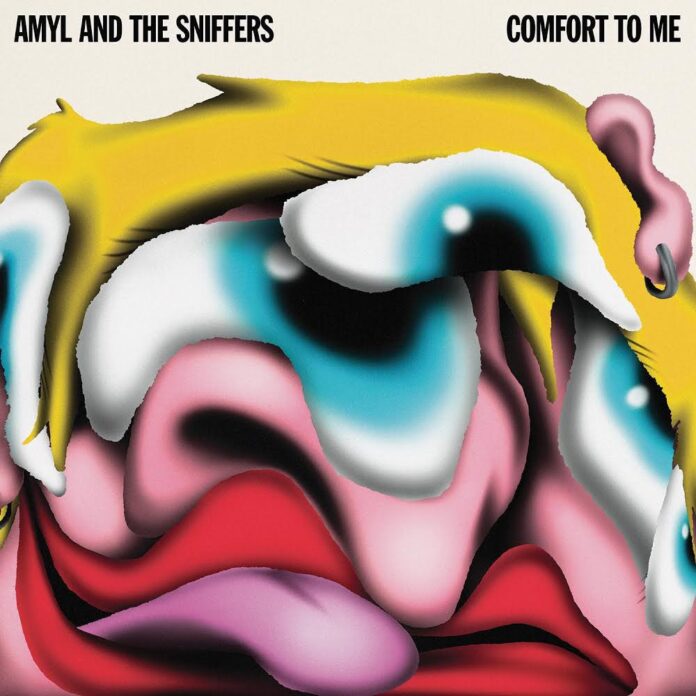 AMYL AND THE SNIFFERS

Announce New Album ‘Comfort to Me’

Amyl and the Sniffers are pleased to announce their new album ‘Comfort to Me’ will be released on September 10th 2021..Check out the first track from the album, ‘Guided By Angels’ out today on Rough Trade Records (UK/Europe), ATO (North America) and Caroline (Australia & New Zealand). The album will be available as an LP colour, LP standard black, LP deluxe – cover version plus, CD (wallet pack with booklet) and Digital.

Late in 2020, Amyl and The Sniffers went into the studio with producer Dan Luscombe to record their sophomore album, ‘Comfort To Me’. Written over a long year of lockdown, the album was influenced by and expanded on a heavier pool of references – old-school rock’n’roll (AC/DC, Rose Tattoo, Motörhead and Wendy O Williams), modern hardcore (Warthog and Power Trip) and the steady homeland heroes (Coloured Balls and Cosmic Psychos).

Lyrically, the album was influenced by Taylor’s rap idols and countless garage bands. Seventeen songs were recorded in the Comfort to Me sessions and the top 13 made the cut. They were mixed long-distance by Nick Launay (Nick Cave, IDLES, Yeah Yeah Yeahs) and mastered by Bernie Grundman (Michael Jackson, Prince, Dr Dre).

Amy Taylor on the album “If you have to explain what this record is like, I reckon it’s like watching an episode of The Nanny but the setting is an Australian car show and the Nanny cares about social issues and she’s read a couple of books, and Mr Sheffield is drinking beer in the sun. It’s a Mitsubishi Lancer going slightly over the speed limit in a school zone. It’s realising how good it is to wear track pants in bed.  It’s having someone who wants to cook you dinner when you’re really shattered. It’s me shadow-boxing on stage, covered in sweat, instead of sitting quietly in the corner”