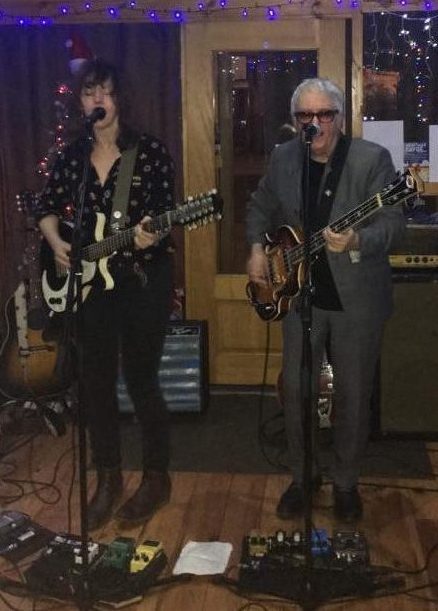 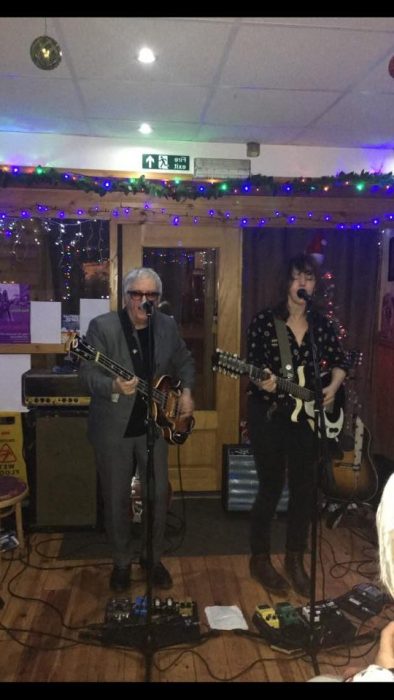 An intimate show by one of America’s most under-rated, under-stated songwriters, ‘Cautious’ Amy Rigby.

Having been married for twenty-five years and together for more than thirty, my wife and I find that we have inadvertently adopted some of each others character traits. She has become more cynical and I have turned into  a soppy, hopeless romantic.  This is pertinent as I feel great joy and pleasure from seeing Wreckless Eric and Cautious Amy’s relationship develop and blossom.

I had met Eric a couple times pre-Amy, his Bungalow-Hi period. His songs were full of bitterness and self-loathing ( Local and Same in particular) and although always a funny and bumbling yet eloquent man, there seemed to be a permanent raincloud above his head.

Meeting Amy, an American singer/songwriter of some, modest, repute was the best thing that ever happened to him (and her it seems). He is now a genial curmudgeon and birds suddenly appear when he enters a room, singing sweet tunes. Seriously, they both seem very happy and made for each other.

Their union has produced three cool albums ( Wreckless Eric & Amy Rigby, Two-Way Family Favourites and A Working Museum) but this short UK tour saw the spotlight fall on Amy, celebrating twenty years since releasing her own ‘Diary of  a Mod Housewife’.

The ‘Mod’ part of the title is deceiving, this was a Country album.  When I first heard it I immediately thought of Amy as being Lurleen Lumpkin made flesh.  ( She was the female Country singer who fell in love with Homer in the Simpsons episode ‘Colonel Homer’.  Her biography is here).  What a terrible thing to say!  I know, I know, but Amy isn’t a cartoon caricature of a Country singer – she’s a fully rounded human being with the sweetest disposition and a great, funny, subtle, knowing songwriter.   She has a way of subverting the tropes in Country, affectionately and relocates them to her own life and experiences.

Songs like The Trouble with Jeannie  (ever-present new husbands ex-wife is too nice to tell to piss off) and 20 Questions (dirty-stop-out-partner under suspicion of adultery when probably just a piss-head) are real and funny without being unnecessarily quirky and come over better live, in an intimate setting like Reflections perhaps than they do on record, where you need repeated listens for them to get under your skin.

She has a cool, uniquely American sense of wry humour and way with her home-spun philosophizing which is gently engaging.  She plays Country basically but with a whole load of other musical influences embedded into the music. She doesn’t reinvent the wheel, as the expression goes, but why would you want to anyway if it aint broke. Her songs are full of her personality and a wealth of personal experience and overheard anecdotal evidence.

Even stories from her relationship with Eric make it into newer songs like Do You Remember That?  Him driving the wrong way down a one way street always amuses me, as I can imagine it being totally the fault of the local planning departments signage platoon other than his.

The thing is with Amy Rigby; she really should be a household name. Like Chrissie Hynde or Suzanne Vega. Or the late, great Kirsty MacColl.  But if she was she wouldn’t play venues like this so you’d never get the intimacy of a ‘house show’.

This was a wonderful, cosy gig in Shirleys coolest cafe/bar.  ” Its next to a pawn-shop” said Amy “That’s a good sign” … as Eric tried to stay in the background ( actually slipping out thru the sliding door behind the makeshift stage at one point, still playing the bass).

Highlight of the set for me personally was a version of All I Want, a song covered by Ronnie Spector on her Last of the Rockstars album.

“Keith Richards played on it too, so this is the nearest I get to playing with the Rolling Stones, I guess” said Amy introducing it.

A great gig, an appreciative audience,  at a lovely venue and a true love story. What more can you ask for.

All words  Ged Babey   Pic by Mike Todd.  Video, nicked from Youtube with Thanks to the original uploader.