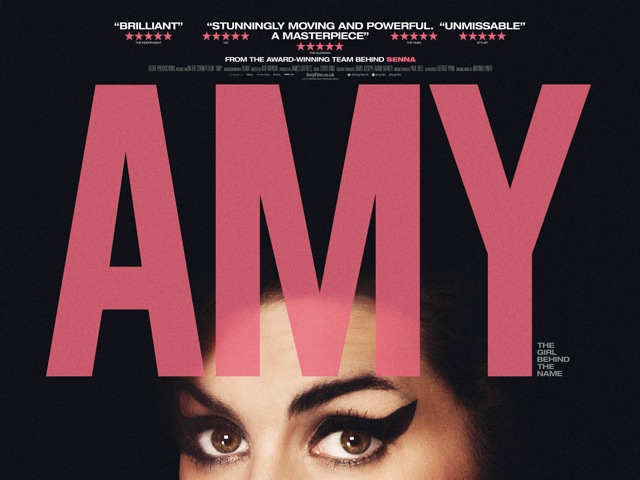 The director of the critically lauded film Senna turns his attention to documenting Amy Winehouse’s glorious rise and heartbreaking fall in his latest film. Fergal Kinney got a sneak preview of it just before it’s general release tomorrow.

When asked at the start of her career about aspirations of fame, “I don’t think I could handle it” is the young Amy Winehouse’s starkly prophetic reply, “I think I’d go mad”.

‘Amy’ – directed by Asif Kapidia, of ‘Senna’ fame – is the first official documentary about the life of Amy Winehouse, cut short in 2012 by her death, aged 27, from accidental alcohol poisoning. Many of the events of this film were the national background noise across the five years leading up to her death, yet so far no biographer or film-maker of serious intent has attempted to join the dots and assess not only who Amy Winehouse was, but how she ended up being carried from her North London home in a body bag on 23rd July 2012.

Assembled from over a hundred interviews and twenty months of editing, Asif Kapidia has crafted a definitive and truly fearless account of this tragically short life. Home recorded footage – largely previously unseen, mostly from former manager Nick Shymansky – is used extensively, establishing an intimacy with the subject matter that soon turns to culpability as events unfold. There are no talking heads, only the voice-overs from the key players in this story. One of the defining triumphs of this remarkable film is the extent to which it reveals an Amy Winehouse that the public never got to see – enigmatic, funny and simmering with charisma. Her early collaborator and friend Salaam Remi sighs and confesses to something of a crush on the young Winehouse, the men that dote on her through these pre-fame years all seem similarly spellbound. Early in her career, she delivers virtuoso performances in much the same way others make a cup of tea – she performs a new song sat with a guitar in her label offices and the extent of her gifts is extraordinary.

Things were, however, already more complicated – Kapidia doesn’t dwell on her North London upbringing, but makes explicit that the trauma of her father walking out on the family home aged nine, not to mention the years of absence prior to this, is central to any understanding of what would come next. A destructive relationship with alcohol almost derails her career before she’d found nationwide recognition, and Island Records seriously considered dropping her until the material that would form ‘Back to Black’ surfaced. Much of this album would be inspired by her initial, brief romance with Blake Fielder-Civil. The great, macabre irony of Amy Winehouse’s career is that the hit that changed everything – ‘Rehab’ – was a conscious mockery of the attempts to save her from self-destruction. Winehouse mushrooms into the public eye as ‘Rehab’, and subsequently the ‘Back to Black’ album, is released – from here onwards, the film becomes a viscerally painful descent towards the inevitable, a miracle moving in reverse. Fame, money and the spotlight arrive swiftly, and Fielder-Civil returns to the scene (funny, that). After her death, Fielder-Civil would pose by Amy’s grave for a magazine shoot, this isn’t inconsistent with much of his behaviour through her life. Lost, and very much with his own demons, Fielder-Civil delights at the gravy train, and after introducing Winehouse to heroin and crack cocaine shortly after their wedding, his every action is motivated by a desire not to lose the meal ticket. When the pair do finally go to rehab – together, a direct contradiction of the advice at the time yet permitted by Mitch Winehouse – we see footage from inside the clinic, in which Fielder-Civil is doing everything in his power to undermine the experience. “I don’t really mind it here…” Amy offers. Three days later, the couple are binging on drugs in a central London hotel.

The British media do not come out of ‘Amy’ well. Whilst Kapidia is often careful not to be overly condemnatory, the responsibility he places at the door of the tabloid press and paparazzi is clear. Daily life for Amy was punctuated by scrums with photographers; every snap, every shout of her name eroding any sense of identity. Amy Winehouse becomes a commodity, and the person in question has already begun to disappear. Kapidia continuously reinforces the horror of the paparazzi – this does much to throw some responsibility in the direction of the audience. Likewise, footage of popular television personalities like Graham Norton and Frankie Boyle playing Winehouse’s alcoholism and bulimia for big prime-time TV laughs is shaming.

The release of ‘Amy’ has already been dogged by Mitch Winehouse’s criticisms of how the film portrays him, taking particular issue with the qualifying words “at the time” having been cut from the end of his declaration that “Amy didn’t need to go to rehab” following an intervention in 2005. This is a red herring – even Winehouse himself does not dispute that he put the brakes on this intervention, and this is by no means the crux of what Kapidia understands to be Mitch Winehouse’s failure to face up to what is happening to his daughter. Especially shocking is when Amy is attempting recovery in St Lucia, with some success, before her father flies over with a camera crew for his own reality TV programme. A scene showing Mitch Winehouse chastising his daughter for failing to show sufficient courtesy to a couple of British holidaymakers, and Amy’s reaction to this, speak quiet volumes.

By the end of the film, the skeletal Winehouse is intent on self-sabotage, detached from her own success and even resentful of the gifts that had propelled her so far. At the night ‘Back to Black’ cleaned up at the Grammy’s, Winehouse turns to a friend and says “this is so boring without drugs” – her own success was of virtually no interest to her, and the final concert dates which led to the horrorshow of her stumbling appearance onstage in Belgrade which were dates she specifically did not want to do. This all makes a difficult contrast with the recent Kurt Cobain documentary ‘Montage of Heck’, where Cobain is allowed to be the hero in his own demise right until the end. Whilst Kapidia was right not to do this, and ‘Amy’ is a much superior film for it, it is telling about how gendered narratives of decline remain.

Kapidia’s previous film – the acclaimed ‘Senna’ – was a film about a Formula One driver that was enjoyed largely by people with no interest in motor racing. Likewise, those seeking a critical or musicologist assessment of Winehouse’s career should look elsewhere – this is a film about something much wider. ‘Amy’ is a film about the failure of a small group of people to address the glaringly obvious. There is no shortage of good intentions, yet at every crucial junction there is appeasement, wilful self-delusion or simply the desire to stave off dealing with a problem for a few more months. Why? This film wisely chooses not to answer this, but the reasons are far more complex than purely financial motivations. At its best, this film is an example of stunningly fearless journalism, and it is testament to the tenacity of Asif Kapidia as a filmmaker that he never shies from the difficult questions, even when there are no easy or obvious answers.

As the credits roll, we see a succession of images of Winehouse in her late teens and early twenties, playing guitar, happy and healthy. The beehive, the eye-make up, the stick-thin frame – this was all a mask. We are asked to remember the real Amy, and the tragedy that this person was robbed from the world, and not just in her death.