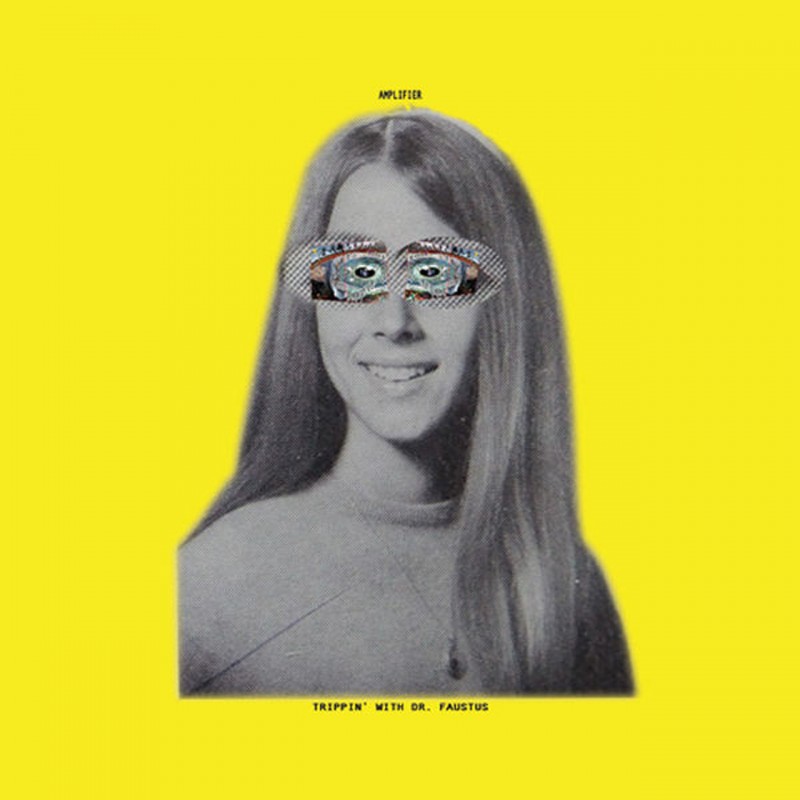 ‘A rock and roll fable by the band Amplifier’ – one that sees their sixth album  exploring Faust for the 21st Century with an epic, inspired and diverse collection. Reset your instrument dials, it’s time to fly.

The yellow covered opus with the usual unconventional Amplifier design comes courtesy  of  their own Rockosmos label.  Amplifier are back to the independent way of being, even down to recording on 2” tape with the associated limitations/simplicity of the equipment with  the rewards of the sound it brings. Maybe a cause of the lengthy gestation of TWDF, its roots in  Silvio, a track  originally from the time of 2011’s The Octopus being the catalyst. Talking of “a contract with Hades – the promise of all the world for just one son,” it epitomises the  Faustian world where the desire for power, greed and desire are commonplace yet come at a cost.

Keeping to  an irregular path, another older track, Horse reappears, like Silvio,  at the right time but if you’re seeking enlightenment as to the direction the trip is taking, look no further than the opening volley for an experience that skirts dangerously close to the peak of their momentous debut album.

Kosmos has already teased the album  – maybe the familiarity in playing it on endless loop elevates its colossal magnificence to  the status of best track (so far); the accompanying  video a compendium of sixties sci fi animated art. It’s a succinct reminder of  Amplifier world – or is it AmpCorp Industries – the miasma of musical  chaos where their grooves of triumph (on 180gm clear vinyl) struggle  to contain their monumental sound. Along with Rainbow Machine and the stomping rut of The Commotion it provides a rocket fuelled take off, initially recalling  their glory days from 2004 when we were first exposed to one of Manchester’s discoveries.

The English vein of 2014’s Mystoria with its Barrett/Floyd trippiness and lyrical connotations is back too; the opening of Freakzone seeing them  become the band The Who could have been. A rip roaring psychedelic tinged  heavy rock exploration – the rarefied air evoking an urgency that rolls like the panzer of their first record – “don’t matter which way we’re facing, as long as we’re rolling forward.”  Overwhelmingly guilty your honour, of delivering the Amplifier twin calling cards – crushing riffs and  lyrical sentiments that “go beyond space/time and the limitations of ones, zeros and polycarbonate manufacturing.”

How much more challenging is it to swim against the tide – easy is boring – and it sees  the fantastically named Beth Zeppelin bringing an added texture to Big Daddy in particular. Emerging from a chance meeting, she proves there’s no need for map nor compass, this is an uncharted yet exhilarating journey. One that dips into an  acoustic diversion with the hypnotic picking on  Anubis at the other end of the spectrum to the devastating opening yet all adding to the Faustian flight.

“Who doesn’t want to make a record about our relationship with The Devil. The ultimate baddy.” The Devil and a fuzz guitar  may be strange bedfellows but make  for a dizzy combination  to provide the standard for space rock for the future. Not trippy intergalactic bleeps and soundscapes but great lumps of asteroid hurtling through the void carrying an underlying message – Be careful what you wish for. But by jove, you can see why taking a trip with Dr Faustus is so tempting.

You can watch the video for Kosmos here: