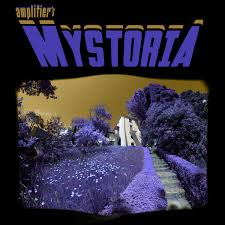 The popularity of prog-rock is at an all time high since it’s 70’s heyday, with the likes of Devlin Townshend, Steven Wilson and Opeth all touring huge sold out shows and Muse chartering their own space ship for a tour of Andromeda II next year. Despite producing one of the all time great debut albums and the yardstick for modern British prog in 2010’s wonderfully impenetrable “The Octopus”,  Manchester quartet Amplifier have never quite found the audience that they deserve for their complex early Soundgarden-meets-the-Cardiacs strain of intricate psychedelia.

Following last years slightly subdued “Echo Street” (It’s the shitty little road opposite Piccadilly Station, mostly famous for football fights) Amplifier are back with a joyful bang on the new album “Mystoria”. This is a proper “ROCK” album with the amps and riffs turned up to eleven, but with a host of eclectic influences bleeding through the feedback and frenetic soloing.

Opener “Magic Carpet” is the kind of instrumental that Rush would have opened one of their late 70’s albums with, followed by the burning riffs of “Black Rainbow” and “Named after Rocky”, both of which are a throwback to their metally second album “Insider”, but with more twists and turns and ambient strangeness than before, more Amplifieriness. That is a word. On “Cat’s Cradle” is where things take turns for the unexpected, a sprightly ska, with feedback guitar subbing for a horn section. Like NOFX with loads of, erm, FX. It kind of works, kind of doesn’t, it’s upful and it’s fun but Amplifier don’t really have a skank in them, whatever else is contained in their formidable arsenal. “Bride” sounds like an outtake from the previous album, and would have worked well in that context but seems a bit dour here, where we’re generally rocking out on the edge of space and time and that. As you do.

The album gets firmly back in the saddle with “Open Up”, running along on that kind of tubular, processed guitar riff which Nirvana made famous and many others have tried to emulate. Here it is perfectly controlled, the hypnotic drone giving way to fiery bursts of lead and a beautiful spacey outro. Check out the video on youtube, there’s a cool horse.

The albums centrepiece is the epic “OMG”. Now I’m told that this is a young persons slang abbreviation for a halfway point between “Om” and “Mong” and this seems perfectly appropriate in this context. Underpinned by a b-line that will haunt every falling dream you ever have as it is played by a satanic German Oompah band as you hurtle into the swirling vortex, the melody could have been written by Tim Smith in his pomp, albeit a slightly subdued, melancholy pomp. Maximum Amplifieriness here.

Following the moody blues of “The Meaning of If”, the album closes with “Crystal Mountain” and “Crystal Anthem”. The first of these is real mysterious beauty, someone’s been listening to a bit of Tinarawen or Terakraft as the song lopes peacefully along on a beautifully wonky African rhythm.  The second section winds the album up on the same kind of maelstrom of sound and fury that started it. It’s the kind of song you listen to time and again, enjoying the chaotic noise but searching hopelessly for a hint of a melody. Then you find the melody, and can’t forget it.

This is a stunning, summery return to form by Amplifer. It probably won’t win them many new fans, they plough to queer a furrow for that, but for those in the know this shows one of our city’s greatest ever bands in fighting form. Catch them at The Ritz in November if you can.