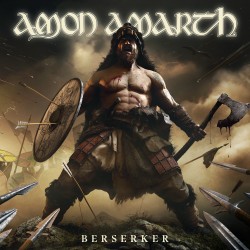 Amon Amarth is in crushing form on the new album Berserker; with a creative musical approach, and a mix of Norse and personal lyrical themes, they take their melodic death metal down new fresh pathways. They are unstoppable!

Melodic death metal titans, Sweden’s Amon Amarth, have with their new album Berserker, hit a further career high. This is Amon Amarth’s eleventh album, but you wouldn’t know it, with its relentless musical energy, massive riffs, and nicely nuanced musical flourishes, that speak to a continuing freshness and creativity. Not forgetting, of course, the lyrical themes, resounding as ever with the inspiration of Norse mythology, as well as more personal themes.

Fafner’s Gold begins the album with a gentle pastoral melody picked out on acoustic guitar and keyboards, before the band charges at the melody in full on death metal mode. The story of dragons, greed and betrayal unfolds, with an unbelievably catchy chorus, driven deep into your consciousness with some intricate blast beats.

Mjolner, Hammer of Thor, has some stirring dual guitar motifs and lyrical soloing, and has a really pacey and danceable feel; and yes, melodic death metal is music you can dance to, in Amon Amarth’s hands! This writer can recall Amon Amarth, in a great headlining set at the Bloodstock Festival, even convincing thousands of metalheads to simulate rowing a Viking longship.

Shield Wall, while ostensibly about a military tactic employed by the Vikings, also seems to resonate of the contemporary need for unity and solidarity, in a time of acute division and social injustice. Johan Hegg’s wonderfully growled vocals are at their most impassioned and impressive here, and the song has a lovely mid-section built around an ascending guitar melody.

Raven’s Flight was the preview track released from the album, accompanied by a very striking video, and is simply stunning. It has an anthemic flourish, with its tale of Viking spirit and camaraderie, and the guitars push the musical intensity of the song, with a mixture of crushing power chords and harmony playing. The rush of intense death metal rhythms is just irresistible, and live one can easily imagine the massed headbanging.

The album closes with Into the Dark, which opens and finishes with a string section, and piano chords that hang beautifully in the air. It sees the band go for a gentler and more philosophical approach, both musically and lyrically. The song conveys both darkness and light, with poignant soaring guitar figures and doom like musical sections. The lyrics convey the song’s poignancy and mix of despair and hope perfectly:

“My demons are a part
Of who I am
I embrace the dark depths
Of my mind
That invades my heart
‘Cause without darkness
Who am I?”

This then is a triumphantly good Amon Amarth album and reflects the creative origins of melodic death metal in the Swedish metal scene, where bands were never afraid to mix new musical elements into the death metal genre.

Play this album loud and often, and the music will quickly ingratiate itself into one of your favourite albums of 2019.