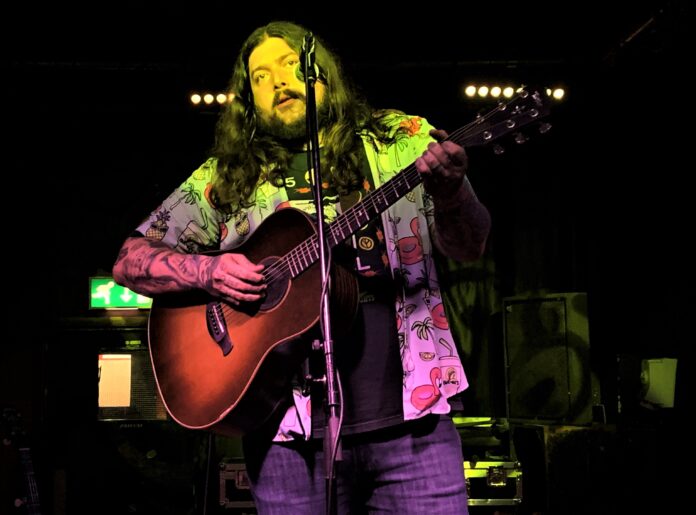 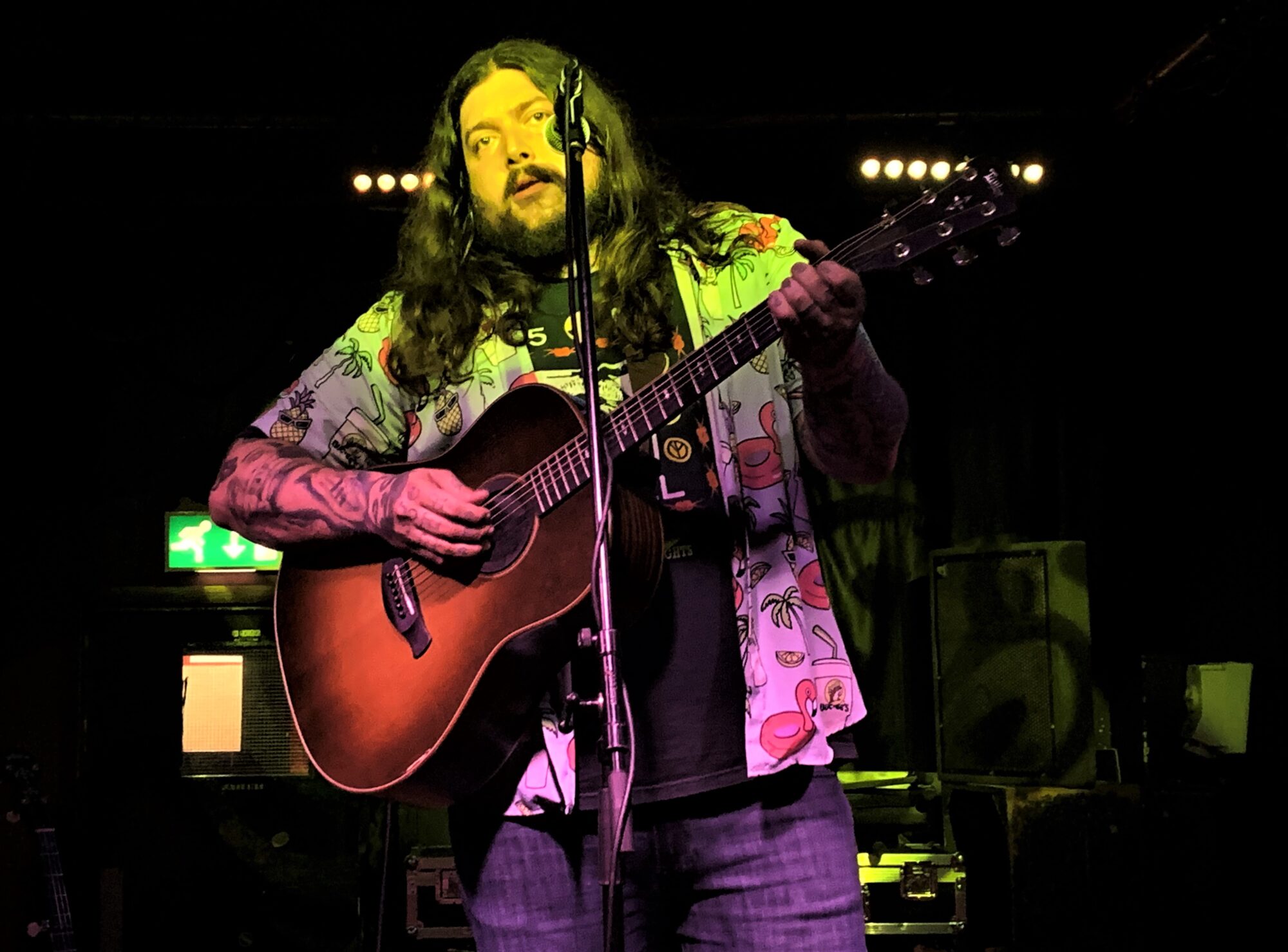 When Amigo The Devil last played in Manchester in February 2020, he was expecting to be back in about eight months’ time. But then of course the world virtually shut down shortly afterwards, having a devastating impact on the world of entertainment. Now two years on from that, Amigo makes a much welcomed return to the UK and Ian Corbridge is there to witness the master storyteller bringing his own brand of humorous and macabre tales to Manchester.

There is no question that Amigo The Devil, the stage persona of Danny Kiranos, is a great songwriter and an exceptional live performer. Proof of this has been cemented through both the extensive touring commitments he was fulfilling up until lockdown, but also his second album released in 2021, Born Against, which made it into Louder Than War’s top 100 albums of 2021. So it was no surprise to me that the atmosphere in Manchester’s Night & Day Cafe tonight was filled with such great expectation.

I was lucky enough to get some time with Danny before the show and his interest and admiration for such diverse artists as Neil Young, Steve Earle and Killing Joke illustrated how he has absorbed influences from a wide sonic spectrum. Even deciding what his setlist for the night would be presented a challenge given that this was his second night at this venue in just a four-day period. So how many songs should he repeat and how many people might turn up to both shows and hope for a completely different set? Further, if the setlist was too long, would the audience get bored or would he have to cut out some chatter. But of course we would never get bored and we love the stories……it’s what brings the songs alive.

What became obvious was that whilst a setlist was fashioned, Danny is most definitely an artist who will respond to the audience and go with the flow of whatever is presented to him. Of course, I had one or two favourites which I would love to hear but only time would tell whether they would make the cut. And his final suggestion that he would probably start with the five same songs he did on his previous visit here and let the audience choose whatever they wanted after that was what I carried in my mind as we ventured out into the main room to watch his sister Katerina perform the support set under her name of Katacombs. 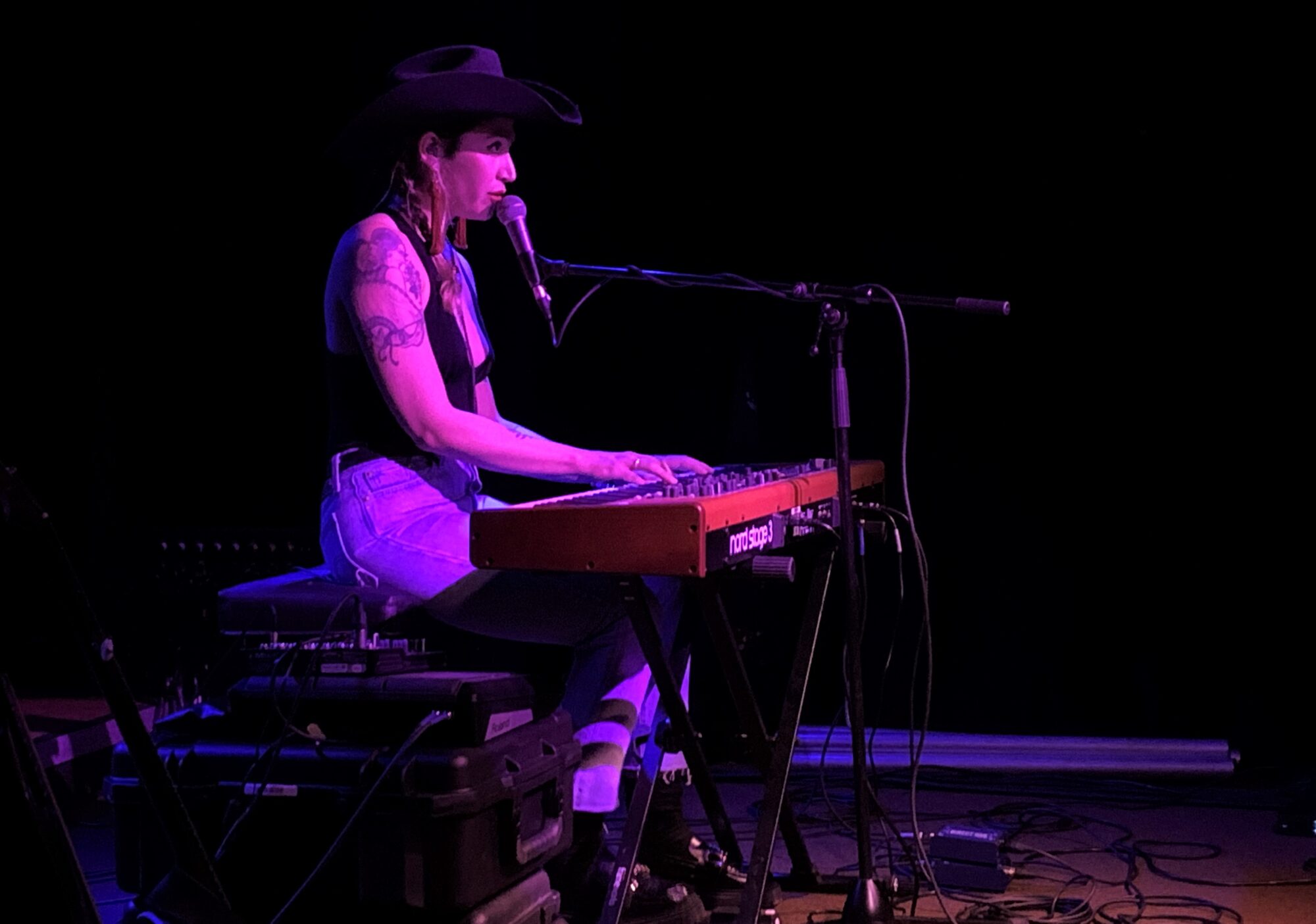 Katacombs proved to be a real talent in her own right, performing mellow, heartfelt ballads with her sultry vocal tones as she accompanied herself on the keyboard. There were songs of love, loss and regret, some of which are on her new six song EP, You Will Not, and the final song she sung in Spanish. Overall, a short but perfectly formed set which really set the tone for the evening, and which was warmly received by a largely attentive audience. And if you want to hear more, you can find Katacombs EP here.

As I found a position directly in front of the stage there was a real buzz emerging through the ever-growing crowd. The first night had sold out and this could not have been too far behind, but it was evident the room was full of fans and my suspicions that we were in for quite a sing-along would soon prove correct. Definitely time to lubricate my tonsils I thought.

As Amigo The Devil made his way onto the stage he was greeted with a very warm reception and, with the old adage that the performer is only as good as his audience, I thought to myself that this was going to be a cracker. Danny had earlier remarked to me how he loved the banter that he gets from his UK audiences, and the early signs were that he would get plenty of that to feed off tonight.

So its just Amigo and his acoustic guitar as he launches into If I’m Crazy which seems to speak of love and obsession as he declares “You’re dream turned into a nightmare when I crawled inside it” and “If I’m crazy, I’m crazy for you”. The sing-along has already started before the song ends with a burst of reverb and we are now well on our way.

After referencing the fact that he has spent copious amounts of money in the numerous excellent record shops which surround Night & Day in Manchester’s Northern Quarter, we get two songs from Born Against, Drop For Every Hour, which prompts more heavy reverb and the mellower and sombre tones of Another Man’s Grave. The sing-along continues unabated. 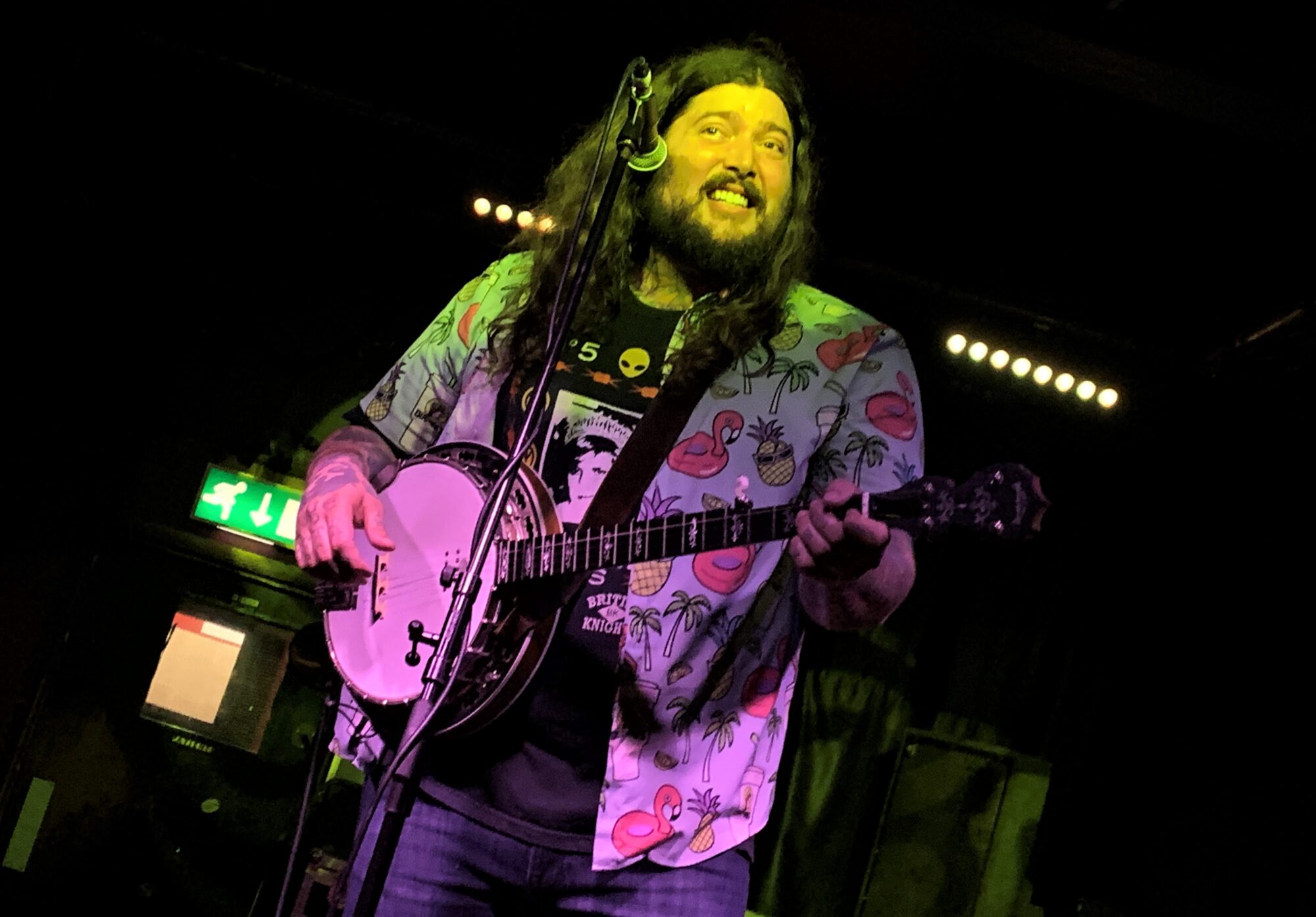 The next song was I think prompted from the audience and was about his 13-year-old dog. It is one of many short songs Amigo has written, but this one was written from the dog’s perspective when Amigo leaves to go on tour. It’s a poignant moment as he sings “I’ll be patient for what it’s worth, bring you home to me” but still gets a roar of approval from the crowd.

The Weight is a song Amigo admits he has not performed in a while which brings a cheer and for this one Amigo picks up his banjo and even plays around with his falsetto voice. Dahmer Does Hollywood features slow picking on the banjo but with no loss in intensity and its clear Amigo has the crowd in the palm of his hands right now.

Amigo then asks the crowd to raise their hands if they know the cover song he is about to play as he launches into Escape (The Pina Colada Song) now back on the acoustic guitar. This leads into I Hope Your Husband Dies which Amigo explains was written about someone who is still a best friend of his, who got married but then her husband died. And given this is the song he presented to her, Amigo tasks us all to carry the burden of this song when singing along to it in our cars. This without question was the biggest sing-along so far.

Hungover In Jonestown is another macabre tale which includes the lines “this life is a joke and death is the punchline” and “drink till the night become another day”. Not necessarily good advice but we know what he means in the context of the narrative.

Announcing that everything so far has been just practice, Amigo then introduces us properly to his concept of the short one-minute song with the challenge of including a complete story within that time. The first one appears to be I Blasted Into Space, concluding that “I told you I’d be an astronaut one day”. That sudden shift from the macabre to the humorous is certainly a defining feature of Amigo’s performance. 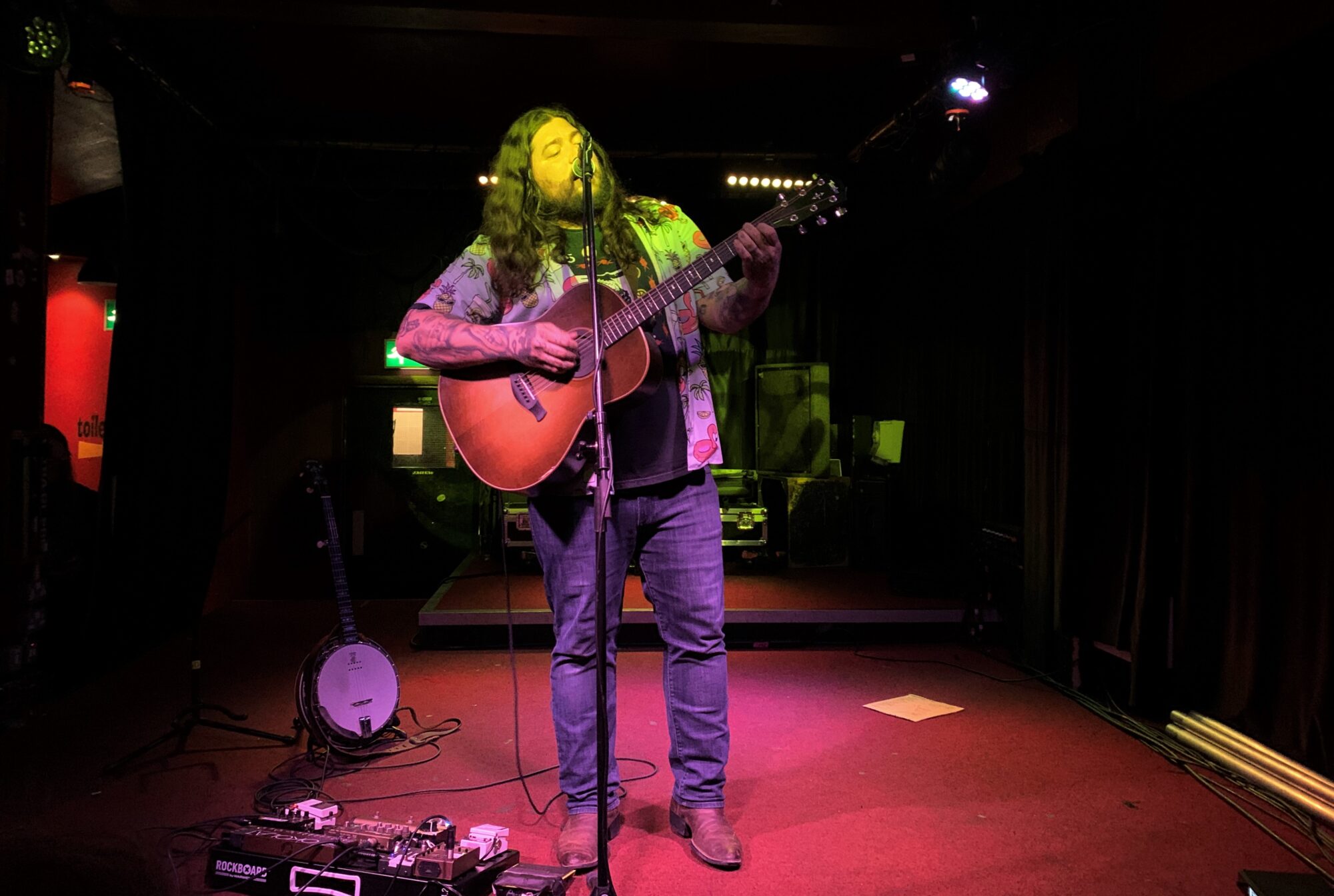 Noting that the easiest songs to write are those which attack himself, Amigo goes all introspective with Cocaine And Abel in which he sings “Not proud of all the choices I made for a lot of my life” but ultimately “everything is fine”. I would like to think I played some small part in persuading Amigo to perform Murder At The Bingo Hall which followed, given that he had not played it on this tour so far. As he ramped up the reverb and the drum pedal took on a life of its own, there is no doubt this song went down a storm.

Back to more mellow acoustic guitar with The Recluse, albeit finishing with heavy reverb, this was followed by One Kind Of People which had a country picking vibe on the banjo and Perfect Wife which had the whole room clapping and stamping along. Amigo then confirmed there were just two more songs to do. Of course whilst that set list still rested on the floor just behind him, he had veered all over the place in response to the banter from the crowd so there was no guessing what we would get as the finale.

Amigo then performed a lovely quiet, slow and melancholy version of The Dreamer, an earlier request from the audience and then finished with a real flourish with the driving rhythm that accompanies Quiet As a Rat. Quite an apt way to finish given it’s a song that gave the name to his most recent album.

The performance by Amigo The Devil tonight was proof once again how much he relishes a live audience and how much it can transform the songs he records in the studio. It’s a masterclass in storytelling which crosses the boundaries of folk, Americana, country music and so much more, and the mix of dark, macabre and humorous tales never fails to entertain or indeed challenge the emotions. It was an atmosphere to savour and one I recommend you do not miss out on next time Amigo The Devil is in your town.