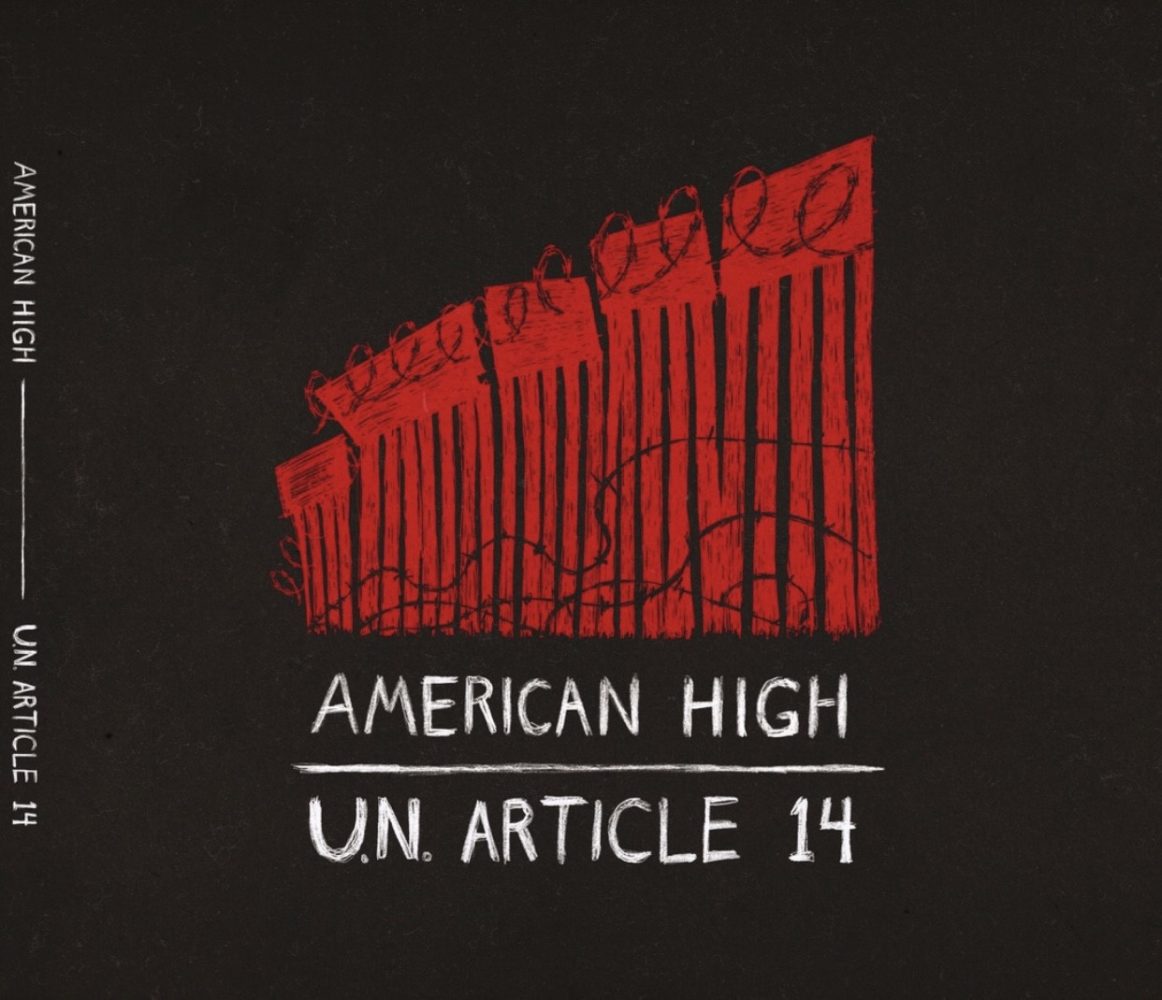 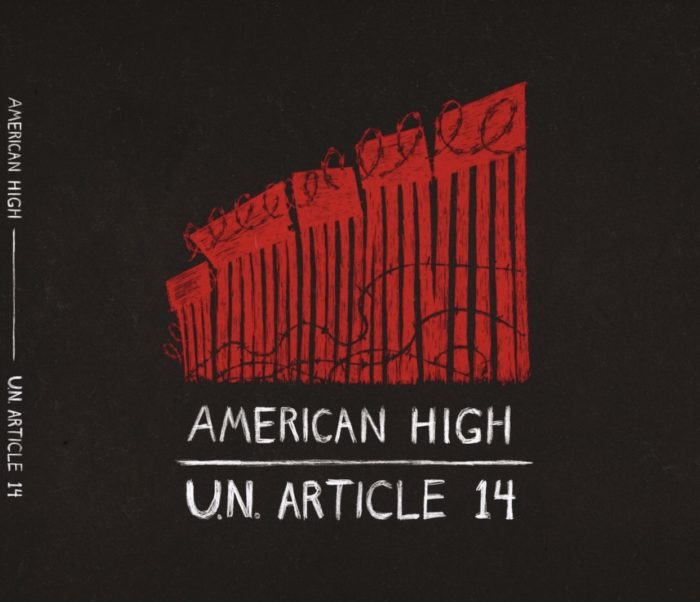 Once again at first glance, the up-beat, feel-good music of US band American High puts a smile on your face as the long anticipated new album is released entitled: U.N. Article 14. The unique twists and turns within the harmonies of mastermind Doug Terry ring out, almost making a statement by themselves. Then suddenly, on a second listen, (and you will listen to it a second time because the sound is addictive), you look up and say to yourself, “Hey wait …. what’s this really about”. Then all at once you begin to realise that these songs probably contain the most important messages currently known to mankind.

Like a James Bond secret and intriguing code, you long to decipher it’s chilling meaning, knowing it’s all-important – perhaps the antidote to save the planet. Only instead of being a fictitious video game time movie, you come to understand this is real. It’s currently happening in our society and no one is doing a thing about it, except American High, by making the human race aware of all the injustices in the States. We’ve already had a taste of Doug’s regard for injustice with his last single, Cheye Calvo.

I’ve spoken to Doug Terry on numerous occasions regarding his songs, and soon the world will be able to share them. His songs make people aware of the current situations that most people would never become aware of, however are horrified when they do. These songs are based on fact and on truth.

Louder Than War: Just moments before your new record is to be released, what topics or messages will you be covering with in your very politically thoughtful, and justice-driven songs?

Thank you so much for the opportunity, Eileen.  One of the new singles is called U.N. Article 14.  Folks can look it up, but like all U.N. Articles of Human Rights, this one describes another of our natural born rights.  Remember, these aren’t rights given or granted to us by other people, groups or governments – these are rights we each were born with.  No person or persons has any moral authority to meddle with, much less revoke, such rights.

U.N. Article 14 I think was written shortly after WW2.  There was a ship called MS St. Louis which escaped Nazi Germany in 1939 just in time.  900 German Jews onboard set sail for USA and liberty, but they were denied entry to the US and Canada, among other countries.  They returned to the Nazis and many were murdered.

There are many, many more historical and current examples of violations of this basic human right. One example is at the southern border of the USA: there are many refugees, migrants and asylum seekers who are being turned away daily by Border Agents of the Federal Government.  Now, regardless of what a person may believe about the need for a wall or not, we want Americans to think about one thing: there are asylum seekers being turned away at the border.  Asylum doesn’t mean you get to stay – it means we check out whether it’s safe for you to go home or not. Each time an asylum seeker is turned away, we as a nation have committed another crime against humanity.  I mean, come on.  Even if a stranger on the street stumbled up to you bloody and terrified, afraid to go home to an abusive situation, wouldn’t you do something to help?  Call the cops?  Pay for a place for them to be safe?  Find a shelter? Most Americans I know would help.  Liberal and conservative – Christian and atheist – most of us would help. And so should we be doing at the southern border.

Do any of the songs hit a special or dramatic note personally?

Yes.  They all do.  For Cheye Calvo, it’s the thought of a military assault on my home: let’s stop those.  Second Sister – well I have a little daughter, maybe it’s a girl-power song.  Or maybe there are other themes too.  U.N. Article 14 – well my wife and daughter are part Jewish and my nephews are half Mexican.

But I hope no one makes the mistake of believing personal racial issues colour our moral opinions.  Today it’s about our southern border, but yesterday and tomorrow it’ll be someone else illegally and immorally stripped of a basic human liberty.  We should stop these crimes now – who knows, some day it might be me.  Or you.

What inspires you to write songs about the state of America? In other words, what is going through your head as you write your powerful message-driven songs?

Good question.  Probably most people would say that I have strong opinions about morality and how we should treat each other.  One of my basic principles is this idea that the majority isn’t allowed to vote on just anything: there are things that aren’t up for a vote – rights which each and every one of us were born with.  Which religion I choose and whom I choose to love aren’t up for a vote.  There are many others. Usually our ‘political’ songs are simply about that.  We point out particular examples of inherent human rights which are being violated systematically by government, police, religion.  We hope spotlighting some of these issues will lead to change.

It will be released any day now.   Then we’re going to try to let as many people as possible know about it.  We’re proud of it.  We’re asking for the 30-second rule:  push play on song one and give us 30 seconds.  If you aren’t hooked by then, we don’t deserve to be on your radio anyway. There’s lots of other stuff happening, but too much to list. All good though.

Who would you most suggest listen to your songs and why?

Another great question.  Well, we’re really into our particular style of rock and roll.  We love 50s/60s rock and roll as much as we love 80s/90s punk rock. Most folks see no similarities between these two styles, but we do.  We love so much about both, we’re sure our songs are some sort of blend. So I guess we would say everyone who knows and likes rock and roll and is open minded to maybe a different slant, that’s who we hope listens. We hope young people in age and/or heart who are interested in helping others and have an open mind, we hope to see you soon too.

Your last single and video Cheye Calvo has an explosive effect on all who see and hear it, can we expect more of that to come?

I hope so. The issue of the border wall and the right to asylum are too important, they effect too many people and have too many potential permanent consequences for us to speak with sombre respect. We’ve seen people smile and laugh while discussing a wall that we all agree will erase the dreams of millions of human beings for a better life.  Even the most hardcore supporters of the wall, those folks who have a sense of right and wrong, we think will agree with us on one critical issue. When speaking about the wall, we all should adopt an attitude of regret and sorrow.

As for the people who are sent home to die?  The asylum seekers turned away?  Crimes against humanity should be treated as such and handled appropriately. We think the video should be explosive.  We want people to be affected.

With so many crazy things going on in the States, how do you pick and choose what to write about?

Cheye Calvo, I Can’t Change and U.N. Article 14 (and maybe others) directly address violations of certain human rights, sometimes with the consent of the courts and/or the people. We like to reinforce the fact that we are all born equal and with certain rights that are not revocable, no matter how many are in agreement.  1.17.61 is our humble opinion as to the true nature of these and most problems facing humanity today.  If only we were able to listen and remember history.

Stream Cheye Calvo by American High on Reverbnation  or on Soundcloud