Truly the best harmony I’ve ever encountered in a band or anything else, American High is an anomaly, a phenomena in the best way possible. Their recent release, Bones in the Attic, Flowers in the Basement, appears to be a happy upbeat mesh of harmony and joy…That is until you listen…then it gets serious. It becomes saturated with heavy anti-political messages, social protests, anti-war and money spending revolts, so fitting for the darkness our society seems to be heading into because of the state of  our world  leaders. 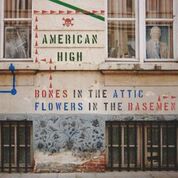 The extreme talent of the band, who by the way chooses to remain anonymous, screams, “listen to us”. This is a faction that chooses to donate every penny they earn to the Sacramento food pantry, while they create true rock music.

I spoke with D.T. about everything in the world, including music, and the state of the world, while the conversation became deeper and deeper with each spoken word. Ultimately, the band loves to play music, however they do so with hidden and multi urgent messages attached to their artistry.

Louder Than War: your band is one of the tightest groups, with the best harmonies that I’ve encountered in forever.

Wow! Thank you so much.

Who does the vocals?

We all do. We’ve gotten a lot of reviews that critique our vocals, or the harmonies as being imperfect.

You know what, they are imperfect, but that’s what makes them so unique and fabulous.

They are perfect because they’re imperfect.

We are trying to make great songs. We think that if you’re trying to make songs, they should be great songs. For us that’s creating harmonies that are unique. For example I learned about something called the circle of fifths. I was reading about it and I got about two sentences in, and I realized what it was, and what they were about to teach me and I closed that website down. I’m avoiding the circle of fifths because probably according to that, you can probably figure out harmonies for anything, and make them sound good.

Your music is refreshing compared to much of what you hear on the radio.

You pick this cute teenager, and you get professional songwriters, some professional musicians, and engineers and producers, and really the singer has nothing to do with the music. We wanted to go the opposite. Back in the 60s they had these one hit wonders, and you don’t see anything like that anymore. It’s like some band out of Wisconsin could make up a great song, but in our days it’s the same 12 bands constantly on the radio, on constant rotation. We wanted to do something different.

How long have you been together?

About 2 and a half years.

So introduce the band.

Well there is something you should know. We are remaining 100% anonymous. I’ll tell you why. Early on we went into the studio. Joe Johnson runs a place called the Pus Cavern in Sacramento. It’s a recording studio. We met this other guy there, who is the lead singer for a band who sounds a lot like Sublime. The guy pulled us aside and said, ” There’s only three reasons to be in a band: to get rich, to get famous, or to get girls”. So as soon as he left, we all sat down and there and then we decided we are going to make sure that we nuke that. We’re going to remain 100% anonymous. The money thing, we are giving away every dime to the Sacramento food bank and family services, which does a lot of really good work in this area. And we’re all taken already. To us there is only one reason to make songs, which is the pure joy of rock ‘n’ roll.

Interesting philosophy, and I hope you get somewhere anonymously.

If things change and we are offered something really big, then obviously were going to have to come out of the closet.

Funny you should phrase it that way, I also write for a gay publication.

Well, we’re not all straight.

Who writes your music?

I’m the principal writer but we all do. It’s just something you feel. We will play, and play and then all of a sudden we will kind of look at each other, and say, “Ok”. We try not to record when we are just making up songs, and then if we remember it several days later, then it’s memorable and we will work on it. If it becomes a song then we will craft it later.

If you could have an ultimate dream on stage, what would it be?

It would be to play a show big enough, and to be popular enough, that people start listening to the message. All the great bands to me always have songs that are catchy, the songs are compelling, and they are interesting, quirky, but they are also infused with a deeper meaning. So, we try to do that.

I also love your album art.

Everything on the album and inside the album was made by a guy named Skylar, who is a very, very talented artist here in Sacramento. Everything on there means something. All of the art refers to songs, there’s a bunny, there’s a bomber plane, for the song, Test Pilot, there’s a picture of Eisenhower, there’s a little tiny boat in the ocean, then there’s the moon looking down which was very creative on Skylar’s part. It looks like a giant eye looking down, for the song Moon. So everything refers to something. I’ll tell you, we got a lot of reviews questioning why we call it an anti-war record. They couldn’t figure it out. We have a song called 1/17/61 with a picture of Eisenhower on the front of it. There’s a lot going on with the record.

We wanted to make rock ‘n’ roll. We watch a lot of old Beatles, TV videos, Green Day, and we love REM’s first appearance on TV when Stipe kind of choked. We love everything from the 60’s, 70’s, 80’s, through the 90’s. We thought that there’s many professors as we like to call them, like Lennon, Billy Joel, Kurt Cobain. We particularly respect bands that change things, that are new. I’ll break it down for you. We are anti-war. First of all we believe that everybody is born with identical rights. So it doesn’t matter if you’re born with a handicap, or if you’re born gay or straight, everybody is born with identical rights. Those rights cannot be revoked by people. For example you have the right to not be murdered. You have the right to try to find food. So we believe that no one has the right to commit violence on another non-violent person, regardless of how much they believe they have the right to do so. It’s always wrong to commit violence. Violence comes in a lot of different forms. I lived in New York actually. I lived in Park Slope. On 911 I remember climbing up the fire scape and looking at the towers. I remember thinking, “Why?” Everybody was asking the same question, “Why do they hate us?” Well that’s a problem. It’s something. There’s got to be some reason. America has 100 military bases in 130 countries throughout the world. We have a military base in Germany. We won that war 75 years ago. What are we doing in Germany? South Korea, we won that one in the 50’s, and we are still there. Iraq, we never left. I don’t know what they are all doing over there, but we can’t help but think that it’s something. It’s something that’s been pissing people off, enough to blow up little kids at a concert. The blood is on the hands obviously of the murderers, but the blood is on the hands of other people too. We think it’s on the hands of military. The military is all overseas meddling in other peoples business, and trying to force people to do what we want them to do, and it pisses people off. So people strike back. That’s why we wrote September, and I Can’t Change. September is about 911, and I Can’t Change is about a buddy of ours that came back from one of these wars, and didn’t even know why he was there. Our opinion is that Eisenhower was right, that’s why we wrote, 1.17.61. If you Google it, that’s the day that he gave his farewell address. So here is a guy who ran the military, a five star General, and then followed that with the Presidency. What does he do with his one and only last chance to speak directly to the people? He says, “Look out for the relationship between the government and the military because it’s the biggest threat to peoples liberties, to people’s freedoms, that exists.” We are spending one out of every five tax dollars on the military. There are more guns in this country than people. We definitely don’t need to be meddling in everybody’s business.

We think it’s all about the money. There are guys that are in charge that’s making too much money, they are in charge. There are people all over the world that are suffering so that these people stay rich. It’s immoral and we want to wake up the populace, or at least try. So let me ask you a question.

Have you heard about what happened last month in Portland Oregon?

You are like everyone else we ask. We ask everybody. Everyone says the same thing, “No”. What happened was on a train, there were two Muslim women. A racist psycho got on the train with a knife and started threatening them. Three non-Muslim Americans of various races stood up to defend those women. Two of them were murdered. One of them was critically injured, they were all stabbed in the neck.

So why isn’t this in the news?

Thank you! That’s our point. Why is that not plastered in the front page of every single newspaper, all throughout the world, especially the Middle East? It doesn’t go along with their mantra. It doesn’t go along with their hate. They hate us, we hate them. Let’s spend some more money on bombs. Whoever is pulling the strings doesn’t want people to know about this, because they want us to hate each other, so they can sell more bombs.