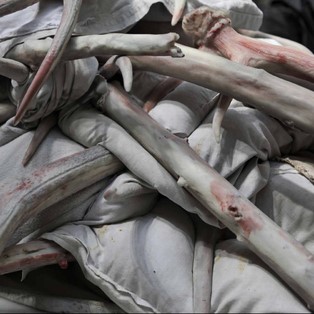 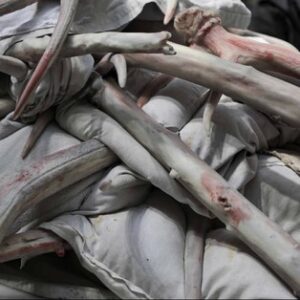 Post metal / sludge outfit Amenra are in the middle of a very busy 2014 with releases galore and live shows. One of these releases is a new split with Madensuyu, part of an excellent split release series which Mike Dines reviews for us below.

At first, the press release from Consouling Sounds for this split 10” seems mistaken. “On this stunning art picture disc,” it notes, “three revolutionary artists combine their forces to create a singular piece of art blending images and sounds.” Three? But there are only two artists on the disc: the sludge metal/doom band Amenra and the indie artist Madensuyu, both hailing from Ghent, Belgium. With further thought, it is then that you realize that the third is artist and sculptor Berinde de Bruyckere, the creator of the image on the picture disc. A sculptor who experiments with antlers, sculpted wax and cloth to create a feeling of the disembodied and the vulnerable, the imagery becomes as important as the music, creating what the press release believes is a truly “artistic statement…[as the release] becomes an art form of its own and a true testament of the creative energy that flows through the city of Ghent nowadays.”

Although this description might seem a bit of an overstatement, the 10” is a real accomplishment. Amenra, better known perhaps for their sludge led tracks, offers an acoustic version of Razoreator, and thus providing evidence of how this style is so easily adaptable to the acoustic. The drone is still there, but the sound is of course sharper – cleaner – and more exposed. The vocals come to the forefront of the mix, adding to the track’s haunting atmosphere, and the sparse percussion finishes off a clever and absorbing arrangement.  There are obvious hints at the acoustic throughout the genre, Raum Kingdom’s Barren Object being a good example of this. But Amenra’s Razoreater goes one further; the track remains acoustic throughout, experimenting further with form and texture.

Madensuyu’s track, Days And A Day, is equally as absorbing. Reminiscent of, say Should We Ever Fall, from their 2006 release A Field Between, the track is a perfect example of the atmospheric soundscapes that the duo produce.  The haunting vocals and drone-like guitar are backed-up by sparse kit, giving the music a real sense of space. At first listen, the track seems a simple arrangement, but it is only upon listening again and again that you hear different sounds and different effects. Furthermore, not only is Days And A Days an engrossing track, it is a perfect companion to Razoreater, as both seamlessly complement the other.

With hindsight, perhaps I was a bit harsh in knocking what I thought was an overstatement in the press release, for the three artists on this release certainly combine in a captivating and worthy collaboration. Consouling Sounds has produced a record that is not only pleasant to the ear, but also pleasant to the eye; and yes, the release is an artistic statement that sums up the creativity in all three artists’ work. This release is one of a series of split 10” picture disc combos that have come out of Consouling Sounds this year. If I were you, I’d check them out.

Amenra’s websites are here: amenra-official.tumblr.com and here: www.churchofra.com They are also on Facebook and tweet as @churchofra

Other releases in this series include the of like Raum Kingdom and Pord – both of which we also highly recommend. Find out more about these here.