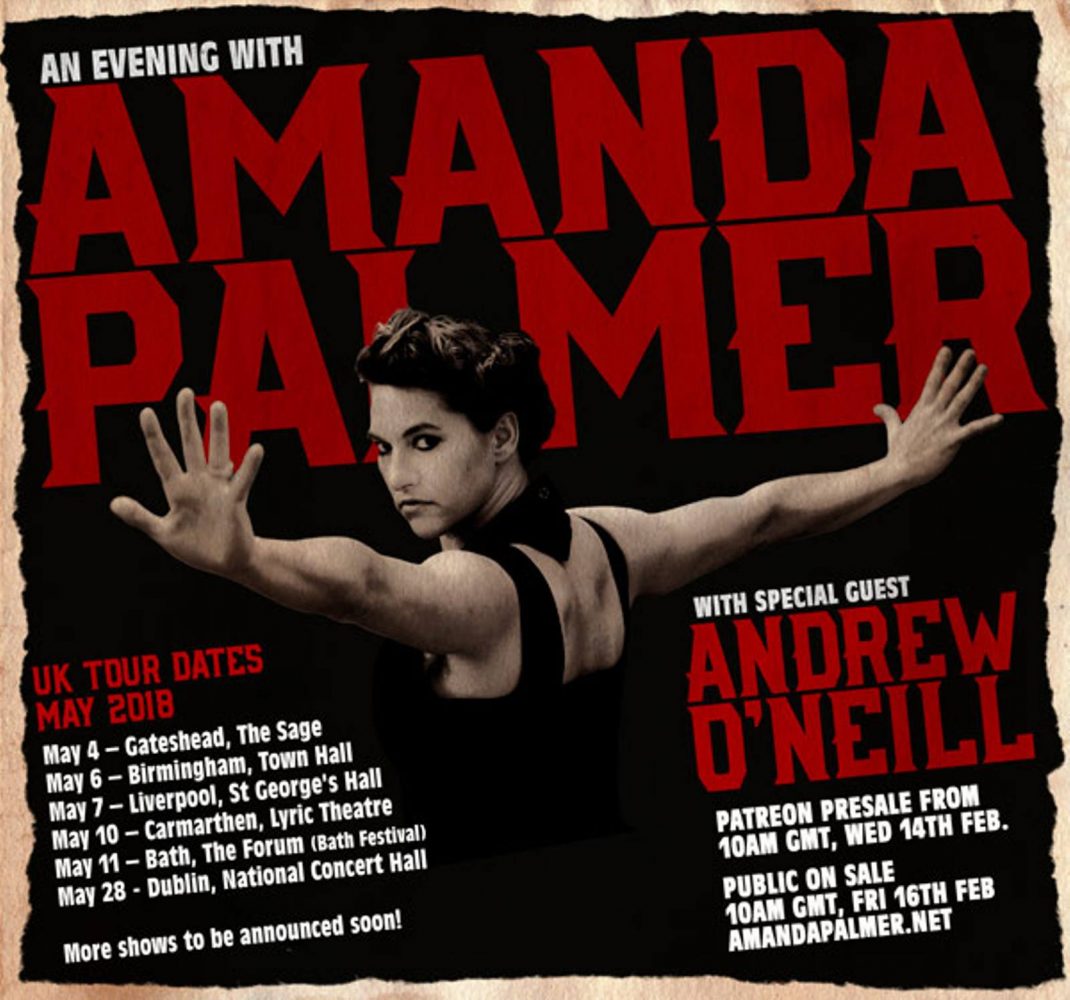 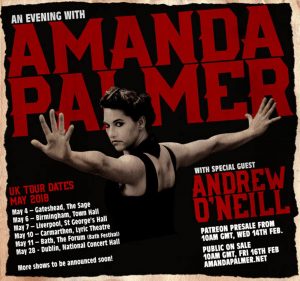 The exceptional Amanda Palmer kicks off her latest tour in Gateshead in the rather grandiose setting of the Sage Gateshead!

Tonight is the first night of Amanda Palmers ‘An Evening With Amanda Palmer’ tour, having never played Gateshead before the enthusiastic audience are in early as comedian Andrew O’Neill bounces on to the stage. He quickly eases everyone into the evening with his variety of voice over work and daft jokes, picking up his guitar he berates looped songs as well as constantly screaming “CAGE THEM!” and “Don’t go in there”.

It’s a suitably odd accompaniment to the one and only Amanda ‘Fucking’ Palmer, who O’Neill introduces before leaving the stage. Opening up with the Map Of Tasmania there is an instant sense of excitement across the room, she is in particularly excitable form as she rants about the signs on the doors backstage. The venue are particularly keen to remind people of where they are but it also becomes an instant talking point!

Tonight appears to be more than just a straight up set from Palmer as she talks in depth about the tracks, and there is also audience participation with the giving of requests. At the same time it is all done in a rather civilised manner but that seems to be expected in the Sage, this grandiose hall commands respect.

There are obvious songs which are requested but many more obscure ones which opens up the discussion about how Amanda Palmer came to Patreon. It’s these nuggets and insights that really add to the evening, at the same time it’s difficult not to be enthralled by the likes of Killing Type or Delilah. Amanda Palmer just has complete control over this audience, they’re spellbound and captivated by these epic songs and rightfully so.

The set is particularly dark though and the conversations between songs aid the mood, the passion by which she performs Missed Me is completely mesmerising. The jaunty piano coupled with her sinister gaze is intense. Similarly, Ampersand possesses this power and passion, oozing from the stage its impossible to take your eyes off the stage.

Whether it be Palmers solo material or her Dresden Dolls songs, every track is treated with equal excitement and enthusiasm from this crowd, in spite of the odd heckle from the crowd. Mrs O. still retains its poignancy to this day, it’s just another exquisite track from Palmer you truly cannot fault her on this occasion.

Tonight Palmer transcends the music, the aforementioned deeper insight really makes an Evening With Amanda Palmer all the more special. Yes Coin Operated Boy still garners a huge reaction and Guitar Hero sounds exceptional but tonight allows this audience to go beyond the music and understand more about Amanda Palmer.

~
Amanda Palmer can be found online here amandapalmer.net. She is also on Facebook and tweets as @AmandaPalmer.