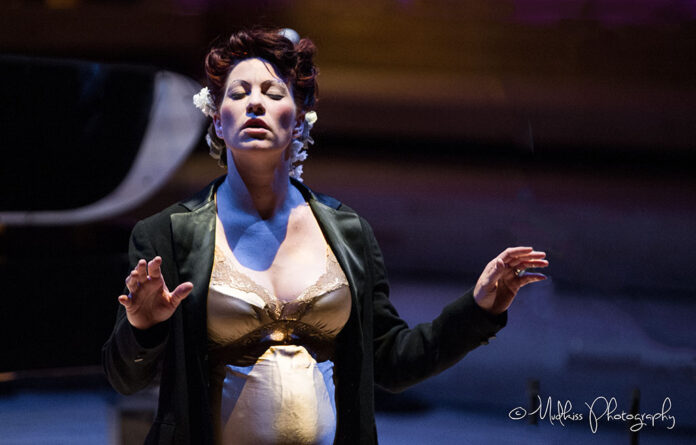 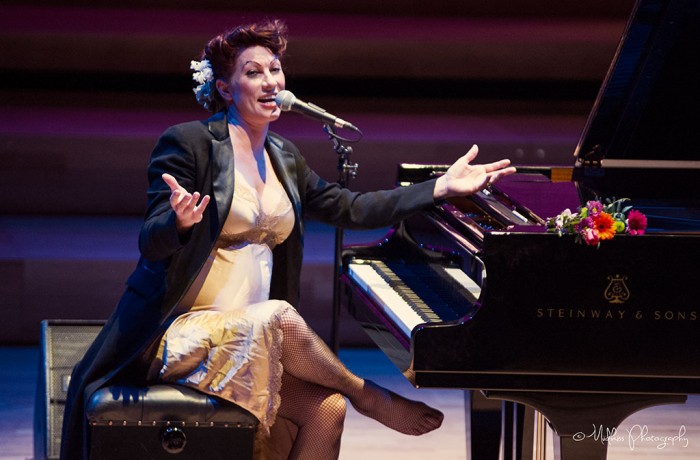 An Evening With Amanda Palmer

Louder Than War’s photographer Melanie Smith and reviewer Mary O’Meara were sat riveted watching the one and only Amanda Palmer’s one woman show in Manchester on Wednesday. They report back in words and photos. (See also our recent interview with Amanda.)

Last night I walked into the Royal Northern College of Music noticing (how can you not?) that one of my favourite bands are playing on the PA system … The Smiths … I think it was Bigmouth either as I was arriving or finding my seat – which I’m sure is something Amanda Palmer has been accused of … but sometimes we need – well, what do we mean by big mouths?  Mouths that are willing to say the things that most of us think / feel deep down – willing to be real rather than give the programmed response – and if Amanda has a big mouth she’s got a big heart to match it and what’s wrong with having a big mouth? (i.e Speaking out / standing up?) It’s something this nation sometimes has an odd issue with, which might be why we make heroes of people who have the guts to do it, or they get demonized, or both – back and forth. Morrissey himself is a good example. So it’s no surprize when Amanda speaks of being a Smiths fan later in the show (more on this later…) 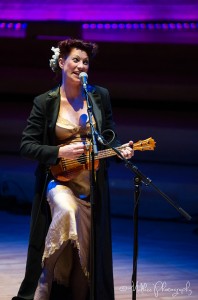 So, there she is – a striking figure clad in a gold silk negligee and full length black jacket, shoes to start with which get kicked off quickly and flowers in her hair. She opens with no instrumentation – just her bare and buoyed up voice – singing what sounds like an Irish folk song – a lament – I don’t know if she wrote it or found it, borrowed it or gave birth to it  but it was a beautiful opening to a night filled with contrasts of light and dark, heaviness and weightlessness. “Pathos” is the word Amanda used several times during the set, mentioning that being pregnant (which she is) intensifies the pathos. It does but it also lightens the mood on many occasions. She’s clearly a live wire and her pregnancy in no way prompts her to take it easy. No, she gives it EVERYTHING.

And we get most everything – so many songs  and I can’t paint a picture of each or this could turn into an extensive essay, but she plays a generous offering from her vast repertoire. We get the delectable and defiant power of Ampersand as well as Astronaut (short history of nearly nothing). Amanda invites requests from the audience who bounce all kinds of suggestions at her, most of which she obliges with – or deftly bats back or away. So we hear Oasis and Runs in the Family along with I Want you but I don’t need you and  The Killing type – all of which give the piano keys an absolutely thorough pounding, so much so that at times I worry that something’s gonna break – but the nice thing is that what Amanda’s really good at breaking is the rules. Her irreverence is refreshing and exciting, and a very special moment comes when she tells us she’s going to play the Hradetsky Four Manual Concert Organ that’s built into the wall at the back of the Concert Hall. Amanda runs excitedly to the Organ telling us we can pretend we’re at church, pretend she’s not pregnant (as she has to turn her back to us to play) or pretend “anything you want”. I love that. I love that freedom she’s just given us.

The five minutes or so in which Amanda engages with the Organ and plays Will (Dresden Dolls) would have been worth coming here for alone. The atmosphere transforms eerily into what feels like another dimension and her voice sounds like it’s coming from someplace else other than her lungs … it truly does send shivers all down my spine.

The amazing thing is that Amanda Palmer manages to send shivers down my spine and whispers to my heart over and over again. She’s just so HONEST and she doesn’t hold back. It’s liberating to watch that outpouring of emotion, to be a part of it because I can’t see how you can fail to merge with it. Another of the major shivers came when she performs The Smiths’ There is a Light that Never Goes out. It’s always an emotive record but I’ve never heard it on a grand piano sung by a woman before and somehow it’s almost too much too bear, so beautiful, so gentle but heart-wrenching. Amanda explains that Morrissey is one of her heroes, that she had a chance to meet him at a festival once but turned down the offer because … she worried one of them would be disappointed and that could ruin a lot of things. Later this summer however, she is opening for Morrissey on his US tour, so will have to come face to face. Somehow I think it will be fine. 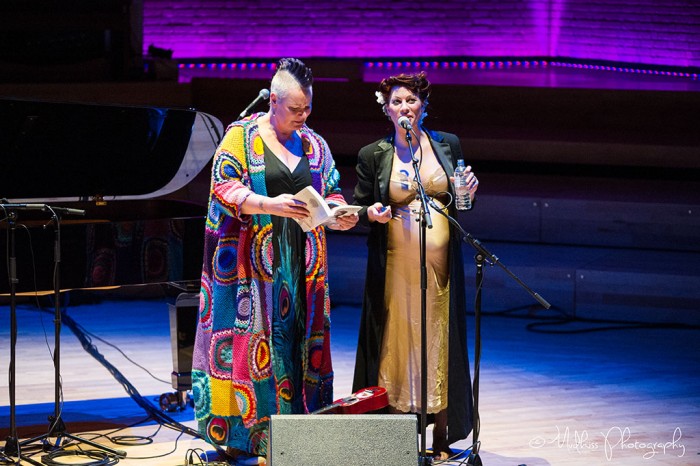 So much more that happened on the stage tonight. Amanda spoke a little about her fascinating book The Art of Asking … and invited one of the audience on stage to select a piece to read which turned out to be a section where The Dresden Dolls (her band) acquire a website and receive love and hate mail – some of which she reads out. The crowd respond with both laughter and sympathetic sounds – and that’s the thing about Amanda Palmer, you can laugh and cry with her, sometimes both at the same time, because it’s real. There’s one more point in the show that was very special which is when Amanda invited her friend Whitney Moses on stage and they performed an amusing sequence and song about the “smugness” of being pregnant – but the moment for me was when they both sang Delilah. I wasn’t quite prepared for how moving this was … it’s perhaps the strength of the bond between the two women on stage – one watching the other on her path to self-destruction, knowing what will happen but powerless to stop it and then that Thelma and Louise ending “Let’s see how fast this thing can go!”… it’s moments like that when I was in awe of Amanda’s art, singing about real life, speaking about real life but yeah, giving us permission to pretend when pretending is magical – permission to believe and most importantly permission to ask and receive – and say it out loud.

You can find Amanda online here: amandapalmer.net. She’s also on Facebook and tweets as @amandapalmer.