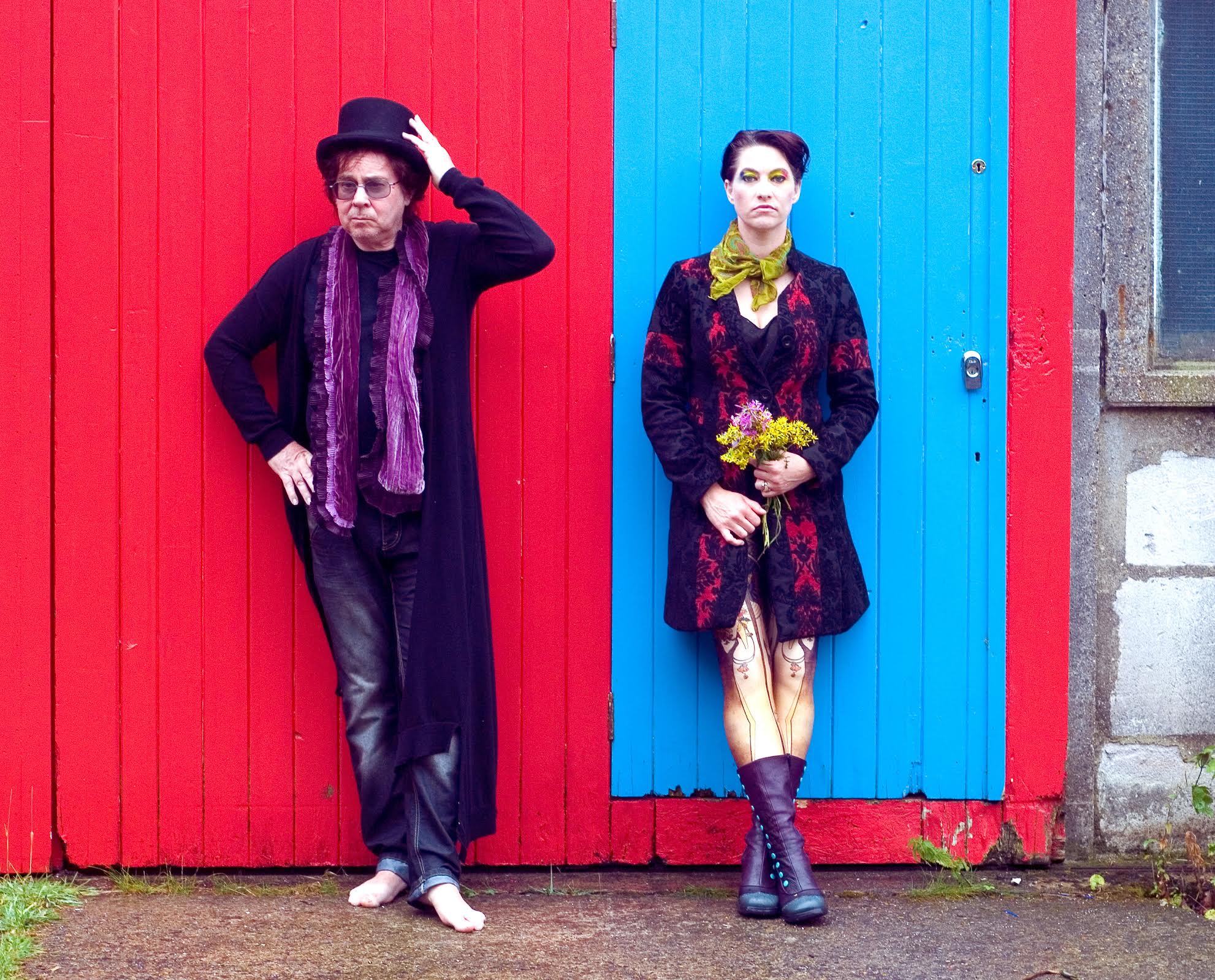 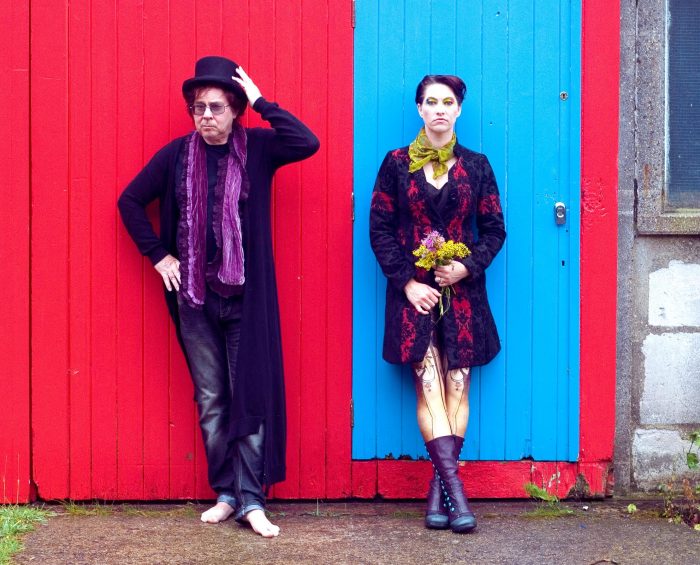 Ahead of the release of new album I Can Spin A Rainbow Louder Than War catches up with Amanda Palmer about working with Edward Ka-Spel of The Legendary Pink Dots.

They say you should never meet your heroes, let alone work with them. But the self-made, DIY legend that is Amanda Palmer has done just that and triumphed. I Can Spin a Rainbow is the forthcoming album to come out that has been created by and Edward Ka-Spel, lead singer of The Legendary Pink Dots.

The collaboration has been a long time coming for the pair.  “He was my teen idol,” Palmer explains. “I was a weird teenager, I started out listening to pop music and then went down the rabbit hole and got into The Legendary Pink Dots when I was fifteen.

“I was obsessively in love with the world the songs created. They were theatrical and mysterious, personal but hard to figure out. You know when you’re that age, they were my band, that music was such a salve to me as a teenager.

“Edward’s voice and his song writing shaped me fundamentally when I was a teenager. I was a piano singer songwriter and stayed that but the band were the fundamental ingredient in who I was and how I understood how bands worked.

“I didn’t have a lot of experience of live music as a teenager, I didn’t see many shows. Most shows I had seen were at really big venues, I didn’t understand small indie bands or have any access to them.  My boyfriend at the time took me to see the band play to three hundred people.

“I watched as they sold their own CDs and hung out with their fans. I stood in the line waiting to meet Edward and I still remember that experience when I meet my fans. They were very open, their fan base was a community and I was part of it. I made a lot of friends through the band, it was a building block of my life.

“When I was 18 or 19 I asked my parents if the band could stay at my house and we put them up for the night and they knew me and my boyfriend because of the community we’d build. I also sold merch for them.

“Then I didn’t see them for year and years , The Dresden Dolls happened. I asked The Pink Dots to support us. It was amazing my heroes were opening for my band.  On that tour we decided to do something together. So I put it on my bucket list; make record with hero.

“After that I did solo work, but we always stayed in touch and talked about it and promise that at some point we would do it.

“It took ten years and without going into the story on the start of the first day of writing I got a call and had to get on a train to race back to be with my friend who was dying of cancer. I was also pregnant. A year to the day showed up on Edward’s doorstep and then we wrote the album.”

Amanda has said that the writing process with Edward was like a spiritual experience. “It was a pleasure and we worked together so easily. It can be scary, you don’t want to work with your heroes,  knowing their process, seeing behind the curtain of magic. It’s frightening as you don’t want to not like what you see.  Especially as his music was so uncategorizable and mysterious, I kinda didn’t wanna know. But that didn’t happen.

“I felt like I was sitting next to a conjuring wizard. He’s not precious about his process, he just sits there and creates. That was the biggest lesson for me. I’m so insecure and private about my own song writing process, to watch him work so openly was completely liberating.

“I thought if my hero can work this transparently then I can. I think you have to do write under the cover of night with no one watching!”

Amanda and Edward wrote the album at Imogen Heap’s, just down the road from Edward’s London home.

“It was total synchronicity, I just emailed her to ask if she had a recommendation and she said ‘use my house’.  Her house was a 20 minute cab ride from Edward’s house. The coincidences stacked up.

“Not only did I work there but I stayed there. It was a beautiful 300-year-old house.  It was a charming experience, making a record in the basement and bringing the baby out there. It was really beautiful.

“The fact that I managed to do it all with the baby and make it all work out felt like some sort of accomplishment. I was so afraid of having a child and not being able to work. But I brought the kid with me, Neil pitched in and I got a babysitter.

“The baby was also a direct inspiration to do as Edward was doing – sit my ass in a chair and simply write. Not to judge my own views, but to directly transmit what would come out. Edward was also part of the inspiration that I couldn’t waste my time. As a mother when you go to work in a studio you better be working!

“All that gave birth to the album and the songs. I wasn’t sold on the fact that this record would be good. I thought whatever it was, I would be happy with it. I wanted the process more than the product, but in the end I was so thrilled with the writing. It was the first time in a long time I’ve been able to sit down and just write.

Edward and Amanda also had a lot of downtime through the process, where they were able to talk about the music business. “We talked a lot and got to know each other in those few weeks. He talked to me about The Legendary Pink Dots and how the touring business has gone. All the original members were all British but they all left and they never toured the UK, apart from playing a few odd dates. They just left it behind and  never got an inch of press or ink in England.”

I Can Spin A Rainbow is beautiful, ambiguous and some may say dark. Amanda explains why there is more light in the record than one may first think.

“We’re both pretty dark, the material of Edward’s is all caked in darkness, but there’s also a lot sarcasm, hope and slices of lightness.  We have a lot in common, we’re both dark sarcastic and also very optimistic.”

“One of the things I found very inspiring working with Edward was that I turned off my autopilot song writing voice , switched channels , allowed myself to write how I used to write in my late teens early twenties, Edward gave me the excuse to put a comfortable old outfit back on.

“I’ve got more and more literal with song writing as I’ve gotten older. The younger stuff was filled with strange illusions and the songs didn’t even make sense to me.  I missed using that muscle, it was a  great excuse to exercise it. Edward does write in a literal vain but subjects are hard to figure out. I felt like Edward and I were conspiring together.  We would know what the song was about but would dance around and above and under the subject. It was like playing a game. That was a blast, I’ve never co-written music like that. It felt magic.”

Palmer is no stranger to crowdfunding and this album is no acceptation. I Can Spin A Rainbow was funded by fans that subscribe to her Patreon account.

“The whole thing funded by Patreon, Edward was an inspiration to getting funding by the fans, it all led me to where I am now. It’s amazing the fact that this is a small weird indie non-commercial record but I’m gonna be able to pay him really well because I have thousands of fans supporting me. There was no shoe string budget, we got to make it properly. The fact it’s all coming full circle it’s the best!  9000 people trusting me with their money, especially with what is going on with Trump and everything, makes me feel like the luckiest artist in the world.”

“It feels like I can re-pay an unpayable gift he gave me when I was a teen.”

Palmer and Ka-Spel will soon be hitting the road with the performance. She explains how it transfers to the stage.

“It will be beautiful. He’s a fantastic and mesmerising live performer. We’re also taking Patrick Wright on the tour with us, he’ll be on violin. Edward will be on keyboard, it’ll be incredibly intense and atmospheric. We’re building a show now, it’s going to be like a piece of theatre.”

Find out more information about I Can Spin A Rainbow via Amanda Palmer’s website here. Find out her tour dates here.