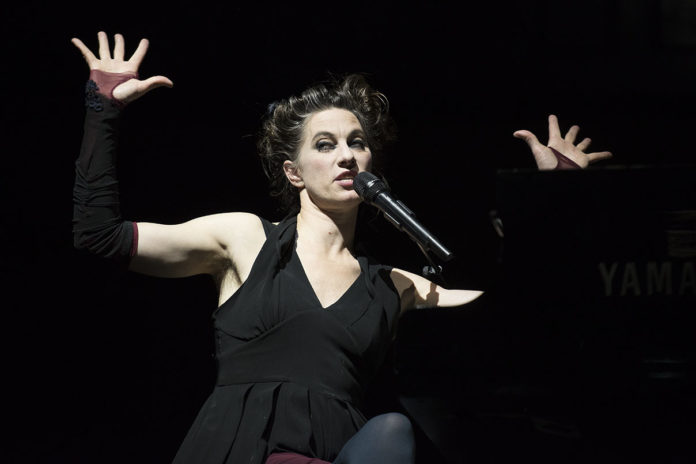 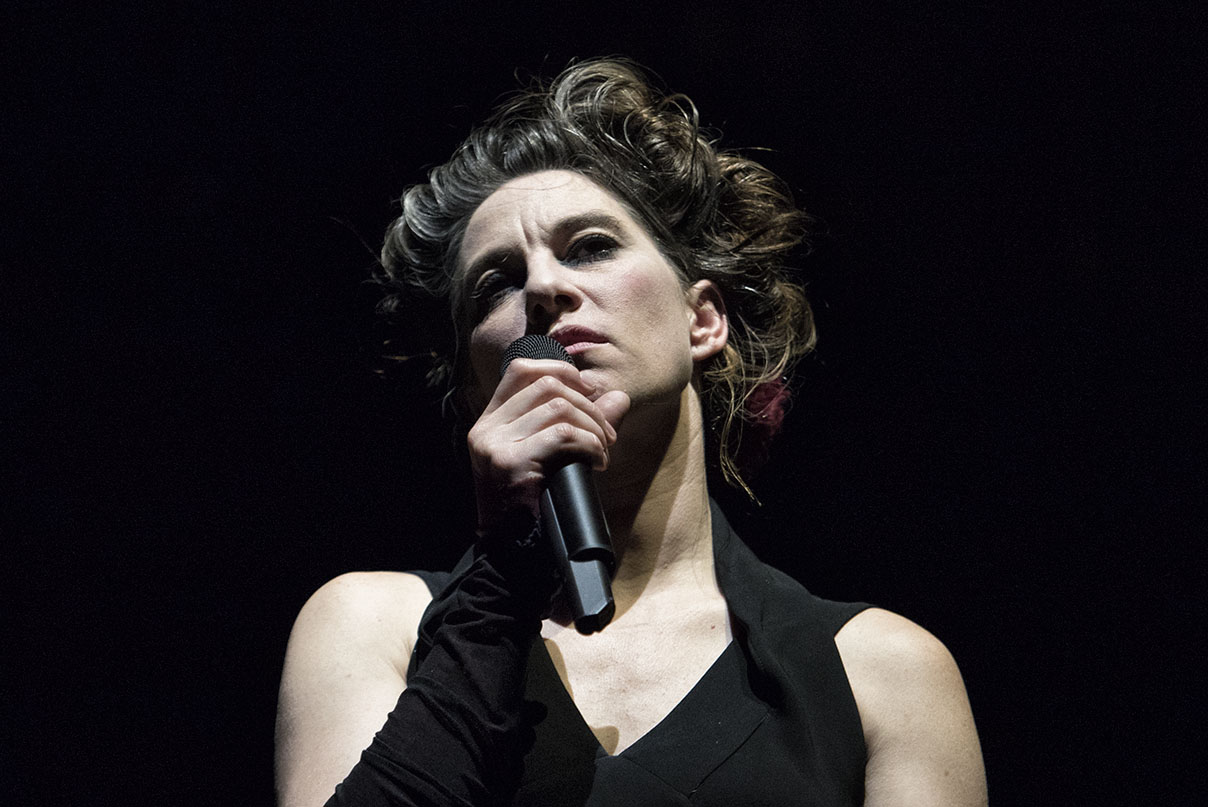 Cazz Blase and Melanie Smith have an experience at the church of Amanda Palmer as she brings her “there will be no intermission” tour to the UK – described as a night of piano, pain and laughter.

The actor Maureen Lipman was once quizzed by a taxi driver about the nature of her one woman show, Re:Joyce!, a celebration of the life of Joyce Grenfell. Upon confirming for the driver that the show was just her and her piano accompanist on-stage for the duration, he replied that it must make for a boring show. “Not for you” he added hastily “For the audience”. Such is the nature of the one woman show.

The Lipman anecdote has a bearing in this case because, while Amanda Palmer is accompanying herself on piano and ukulele, the show we’re about to watch is very much a one woman show rather than a conventional gig. It is a seated event, in a venue not used to holding seated events, and we have been told beforehand that the bar will not be open during the show. We’ve also been told that no one can leave once the show has started. The show itself is said to be three hours long. In the latter respect this information proved incorrect: It was four hours long. 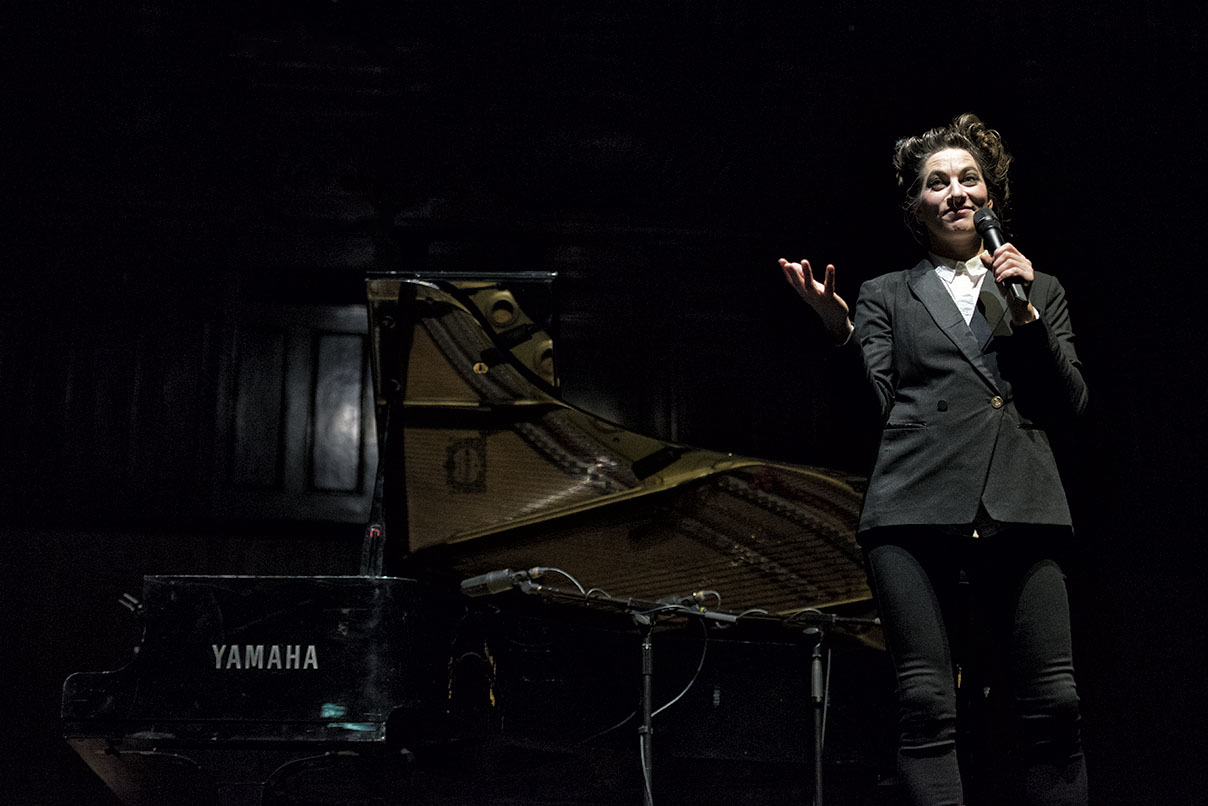 Palmer begins the show with ‘In My Mind’, which she sings while walking through the audience from the back to the area in front of the stage. Once there she pauses to relate a tale of performing the song in a hospice for a woman dying of cancer, a story which, while dark, is typical Amanda Palmer.

It’s as though, faced with the prospect of touring an incredibly personal, complex album after a long absence, Amanda has instead decided to use the show format to tell the story of her life. We begin with young Amanda, listening to Madonna records and being signposted to The Cure by her older brother. We hear about the angry teenage goth years and how Amanda the nascent songwriter would bash away angrily at the family piano, regularly breaking its strings, in a process her family tolerated as it was “Cheaper than therapy”. We hear about the defining moments in her life, the dark and the hopeful, the bad and the good. We hear tales of sex and sexuality, naiveté, death, abortion, miscarriage, marriage and motherhood.

While this leads to many long stories and anecdotes, songs are woven into the narrative, and there are some surprises here, including a sly, subversive rendition of ‘Part of your world’ from The Little Mermaid.

At roughly the midway point, we pause for a 12 minute intermission and the audience rise, stiffly, from their respective plastic chairs and wooden benches. A toilet run in twelve minutes seems impossible so many aim for the bar instead or simply stand, blinking in the light, trying to re-animate their limbs. 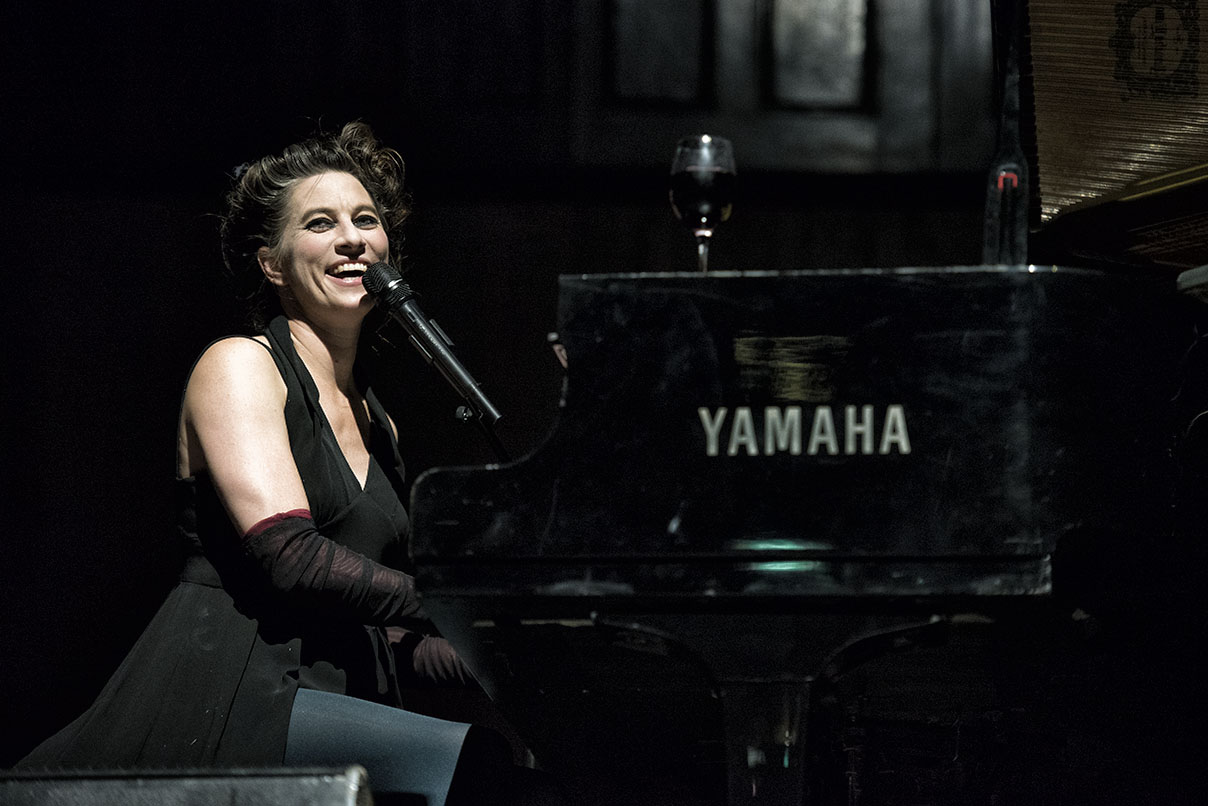 Amanda has warned us that the second half will be darker than the first, and while this is definitely a show in two acts, it begins quirkly, with the old Dresden Dolls favourite ‘Coin Operated Boy’.

She has changed out of the skinny jeans, white shirt and jacket she wore for act one, and is now wearing a flowing black gown with black gloves. The effect is both somber and theatrical.

The second act can be seen as a deconstruction of the show itself in some ways. Amanda talks about how she came to create this four hour epic. She mentions seeing Hannah Gadsby’s game changing show Nanette and this, along with seeing Nick Cave playing live in Australia not long after the death of his son, and Bruce Springsteen’s Broadway residency last year influenced her decision to create this particular show. 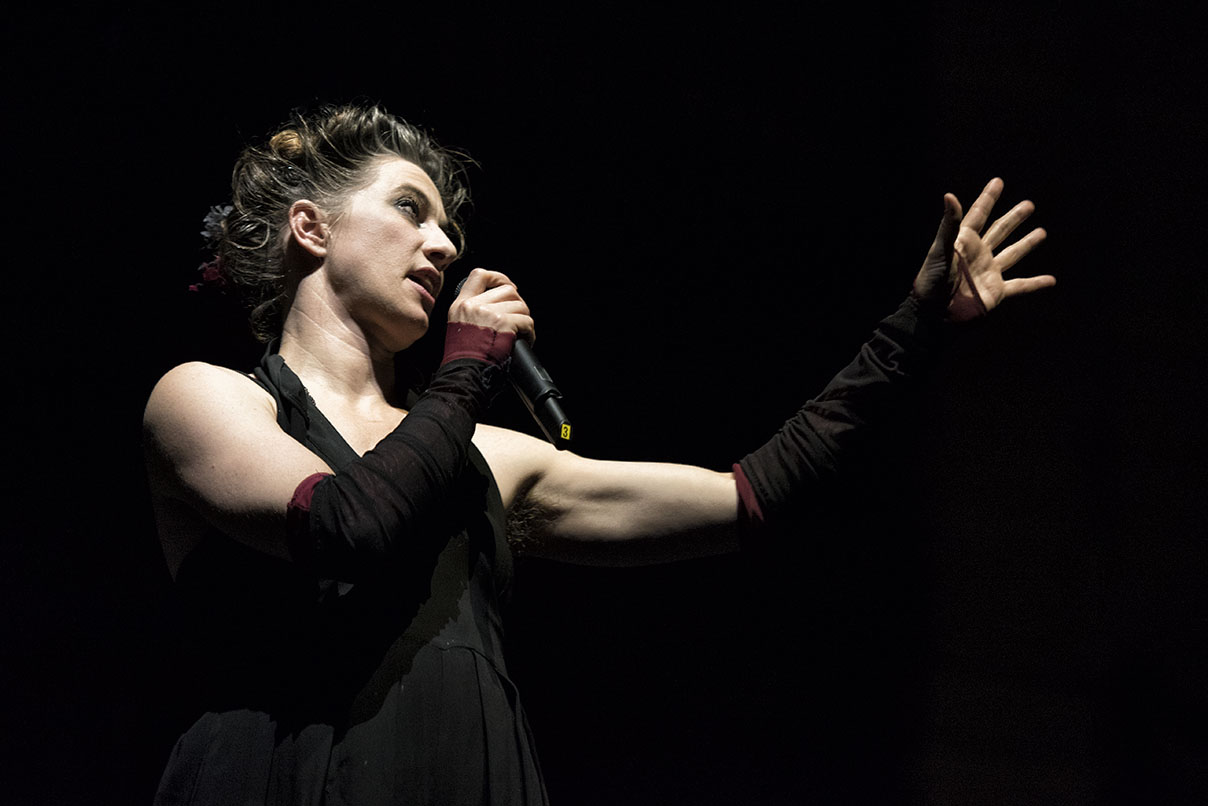 There is a dialectic on the nature of the artist in troubled times, with Amanda maintaining that art should “go into the darkness and reveal the light” and radical compassion, a long time belief of Palmer’s, is also a theme throughout the show. Both of these are themes that feature on the current album, There will be no intermission, but they’re also aspects of art that she has discussed as part of a TED interview which was aired recently on BBC Radio 4Extra.

There is pin drop silence as she performs the darkly foreboding ‘Drowning in the sound’ and the melodic and relatable ‘A mother’s confession’ leads to a sing along at the end, on the refrain “At least the baby didn’t die”.

The second act concludes with a rousing interpretation of ‘Let It Go’ from Frozen, the tyranny of Frozen (and all its accompanying merchandise) for parents of young children being a running gag throughout the show. She receives a rapturous standing ovation as she takes a bow, then leaves the stage. 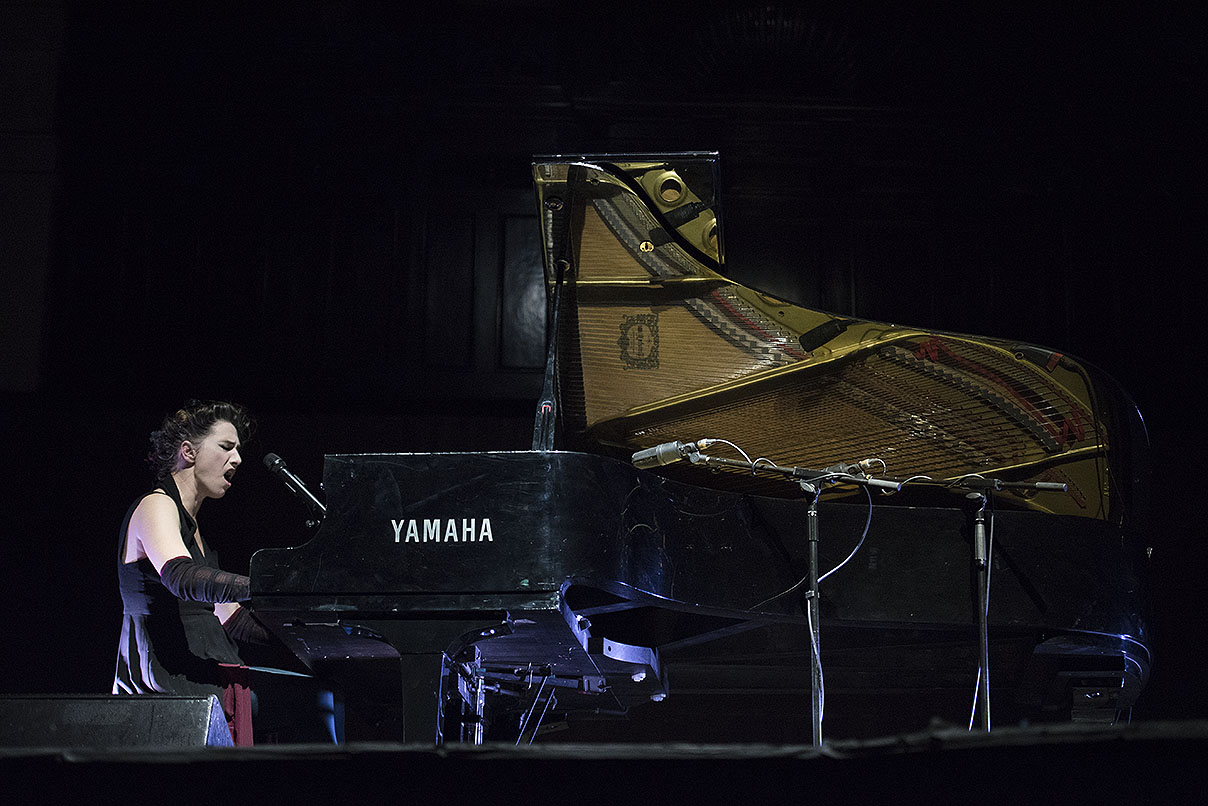 We stay on our feet, not sure if there’s going to be an encore or not. Upstairs, those poor souls who’ve been sitting on wooden benches for four hours are stomping their feet on the balcony, en masse, and it sounds like an earthquake.

Amanda returns, sporting a spangly t-shirt over her dress. It bears the legend ‘Fuck Boris, Trump & Farage’ and was picked up on the Glasgow leg of the tour. She concludes with a final story before sitting down at the piano one last time to perform ‘The Ride’, a gently philosophical musing on life inspired by the famous Bill Hicks sketch.

It’s a strangely gentle conclusion to a show that has, at times, been searingly personal to the point of uncomfortable, but it reflects the nature of the There will be no intermission album, and it’s accompanying book of essays and artwork, well. And it earns her a second standing ovation.

Amanda Palmer can be found online here amandapalmer.net. She is also on Facebook and tweets as @AmandaPalmer.