Home Music Bands Am I Dead Yet?: The Donkey, Leicester – live review 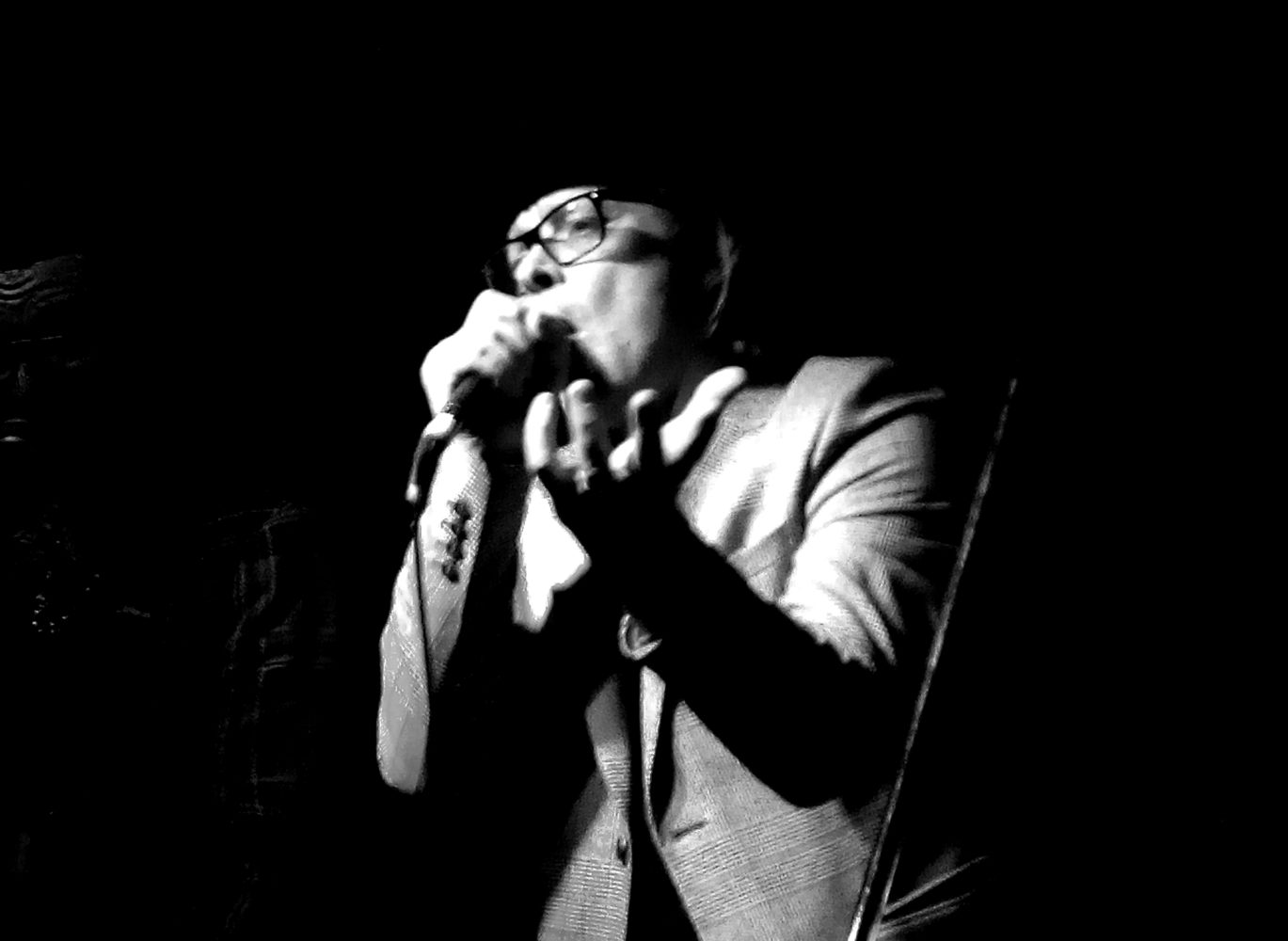 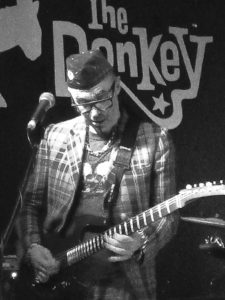 Am I Dead Yet?
The Donkey, Leicester

As album launches go, you know it’s going to be a low key one when your first sight of the front man is seeing Mary Byker clambering up a ladder to switch on a projector perched on top of the PA speakers. Clearly a man willing to suffer for his art – at least he would have if he’d fallen off. Macthehack reviews one of the Am I Dead Yet? ( Mary Byker & Noko) Launch gigs in his own inimitable style.

Leaving aside these health and safety issues, this second album launch gig by Am I Dead Yet? was something of a journey into the unknown. Clearly conceived as a studio project by Mary Byker (Gaye Bykers On Acid, Apollo 440 & now Pop Will Eat Itself) and Noko (Magazine, Apollo 440), attempting to bring the lush cinematic sound of their startling album to life seemed a risky move.

So perhaps it’s understandable that the mood at The Donkey is more that of public rehearsal than full on gig. But despite that the band – augmented to include Derek Thompson (AKA the Hooodlum Priest) on bass, whose CV boasts SPK, The Cure and Jeffery Lee Pierce and Apollo 440’s Cliff Hewitt on drums – still took to the stage to an improbably grandiose bit of James Bond soundtrack. John Barry’s ‘Underwater Mayhem’ from Thunderball, I think, but if not certainly something in that vein.

That nod to the world of cinema was entirely appropriate given that the album feels like a soundtrack to an as yet unmade film. 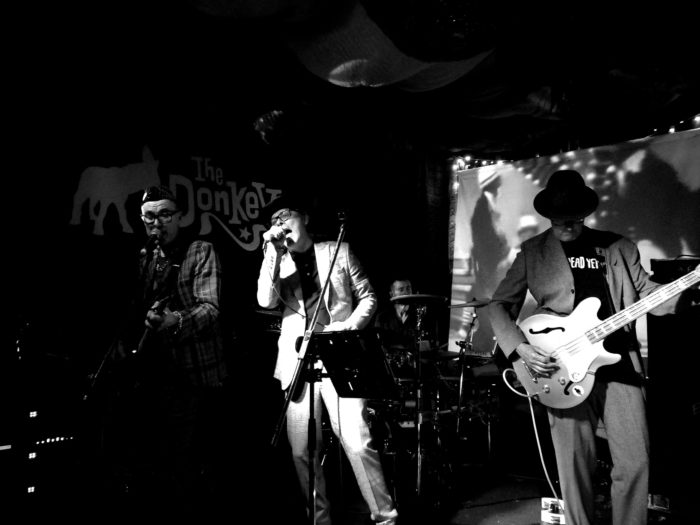 Initial signs were a bit disconcerting and electronic drum kit and no sign at all of Noko’s vintage Gretsch White Falcon guitar, credited with giving the album the twangy 50’s sound which is one of the hallmarks of the record.

Such shallow concerns were quickly dismissed once the band ambled onstage, suited and booted, and Mary explained that they would be doing a run through of the album. Which meant the band launched straight into the epic paean to lost love ‘Leaving Me Behind’. It’s not an easy trick to pull off – in a live setting re-ordering the album tracklisting and working up to this one might have made more sense. But it works. It works quite magnificently. 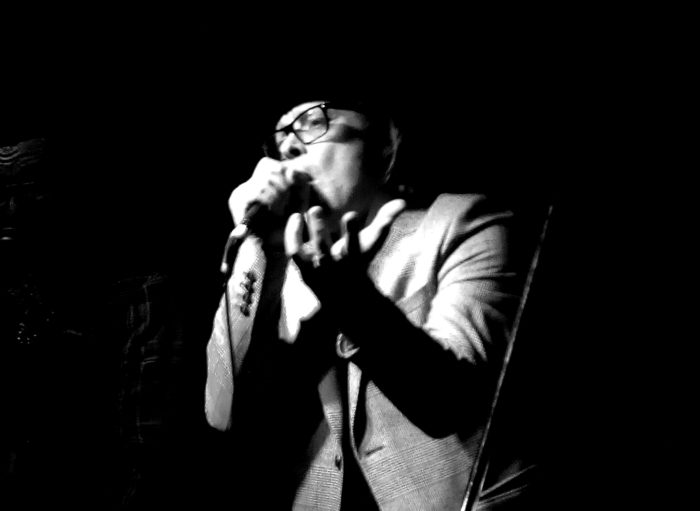 The drums have that same big sound as on the album, Noko’s guitar surfs a sea of reverb and Mary… Mary sings like you’ve never heard him before.

It turns out the boy from Leicester has a really good singing voice which is perfectly suited to the doomed balladering these songs demand. As if to acknowledge this Mary thanks the crowd for indulging this, his most surprising, musical project. It’s a fair point, in terms of reference points it’s probably much closer to Noko’s work with Howard Devoto as the criminally underrated Luxuria, than anything in the Byker boy’s back catalogue.

It’s a big leap from the heyday of Gaye Bykers On Acid (Stewed To The Gills, in this reviewer’s opinion) to the Lynchian ’50s gone bad with with digital orchestration of AIDY? so inevitably some fans of Mary Byker’s usual journeys into sound may be a bit thrown by this project. Which is a shame.  They may be little more than a fleeting live act, but it certainly stands up as amongst – if not the best – ex-GBOA output, from any of the jesters from Leicester.

Yes, the live AIDY? do rely on samples fired from Cliff Hewitt’s laptop to fully recreate the orchestration of the songs but that’s entirely forgivable when it results in such a fully realised rendition of the album in the frankly incongruous surroundings of a pub on the Welford Road.

Highlights include ‘Solid Gone’ a song Mary confirms was one of the first songs written with Noko as a reflection on lost youth in the aftermath of the death of David Bowie – suggesting that this project has been three years in the making.
Also worth a mention is ‘Joe Meek Shall Inherit The Earth’ a defiant hymn of praise to the anti-heroes who create at the margins, driven by their own vision rather than the lust for vacuous fame that produces the diet of dumbed down tabloid celebrities who are force fed to consumers as some sort of anesthetic for the people.

Sartorially, head gear seems to be important to AIDY?, so much so that Noko was heard discussing his choice of hat pre-gig at the bar.  I can report that the man with the twang favours fez-o-rama.com, should you be so inclined.
It’s thanks to the risk taking dreamers like Mary and Noko that wonderfully out on a limb ideas like Am I Dead Yet? can become a reality. The world is a little bit less dull and grey as a result. Now Mr Lynch, how about the film of the album?

Footnote:  If anyone else has the same media player  as me then this is the biog that comes up for AIDY?:  “Belgian scremo/emo violence band that existed for exactly one year (June 2005 until June 2006) and played 21 shows.” Now that sounds like a GBOA side project if ever I heard one!