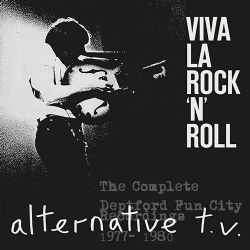 If LTW had an award for re-issue of the Year, it would probably be this, says Ged Babey, so here are the full facts;

Fronted by punk pioneer and Sniffin’ Glue editor Mark Perry, Alternative TV evolved as one of the most exciting independent acts of the original Punk explosion of 1977. Between 1977 and 1980, Mark Perry was behind a string of fascinating post-punk records on Deptford Fun City Records – credited to ATV, the Good Missionaries and Mark Perry solo.

Viva La Rock’n’Roll is a 4-CD box set collating Perry’s entire recorded output for the label, including many recordings available for the first time on CD. ATV’s classic debut album The Image Has Cracked and follow-up Vibing Up The Senile Man are joined by all their singles A’s and B’s, tracks from their shared album What You See… Is What You Are and other rarities, including BBC sessions for John Peel.  Mark Perry himself has written the comprehensive sleeve-notes for this landmark release, alongside a wealth of rare visual material within the sizeable booklet.  The original artwork for each album is reproduced within the wider ‘clamshell’ box set. Also included are the debut album by The Good Missionaries (Fire From Heaven) and Mark’s solo effort Snappy Turns.

The Boxed Set is an aesthetically pleasing thing. The whole works, the lot.  You have everything. It’s the record-collector saddo-nerds dream come true. (Especially if you didn’t buy them all first time around). This is a box of sheer delights which takes you on a wonderful and frightening journey.

The title is deceiving.  There is not a lot of ‘Rock’n’Roll’ on these discs. Together they make up a journey as far away from rock’n’roll and punk , as you can get.  Jazz, noise, improvisation and experimentation is what you get on discs 2 to 4.

Artistically, Mark Perry is always described as brave and uncompromising. Arguably this is shorthand for mad, stubborn and driven.  Whatever, this is a box containing some fuckin’ amazing music and some, on the face of it, god-awful music, (C’mon, is there any point in messing about and pretending it’s anything else?  In ’77 we told the troof, so why not in 2015?)

The Image Has Cracked is one of the five best punk albums EVER. Full Stop. You probably own it already if you are a fan of punk rock circa 1977 or punk per se. .  You probably know it inside out.  From the live experiment ‘Alternatives’ to the Zappa cover to the classic 3-chord-wonder Action Time Vision to the definitive-art-punk-statement Still Life to the Goodie-Goodie Good Times to the track which gives this box its title.

Viva La Rock’n’Roll, the song, is about Paris, Rimbaud, Jim Morrison and a visit to the city by Perry’s mate Tony.  It takes on a whole new meaning in 2015, after the 13th November massacre at the Bataclan and somehow you cannot hear the words Paris is a wonderful city and Viva La Rock’n’Roll in the same light ever again.

If I had the time I would write a book to try and explain why (I think that) Alternative TV were far more important than the Clash; The first chapter would focus on the opening track on The Image Has Cracked; Alternatives. A one-off experiment which documented the failure and struggles of punk while it was happening.

Vibing Up the Senile Man ( part one) took things even further and was a deliberate move away from punk and rock’n’roll and was met with bewilderment.  When a friend of mine had it on in the background in 1979 i was appalled and vowed never to buy it …. the impetuousness of youth!  Listening to it now it is fascinating but does have more tedious lows then high points.

It seems to me ( no expert on the Avant Garde) that it was a journey without a road-map. Perry didn’t really know what he was doing, and the musicians for the most part didn’t quite have the virtuosity to make the music as grand and as fluid as it was intended to be.  This was punk musicians trying to be progressive avant garde composers.

ATV’s non-macho approach to music and willingness to experiment and talk about things other bands wouldn’t dream of (Love Lies Limp) meant their influence spread internationally and subtly catalyzing a thousand bands to make naked, self-analytical, noncommercial music. Every ‘messthetics’ band, noise band, post-punk industrial band were given permission to exist thanks to ATV.

The Good Missionaries live album is a revelation – in the same dubby freeform area as PIL and the Pop Group -but uniquely engrossing.  It’s a live version of the Vibing material basically and somehow makes more sense.   The Peel session from the time condenses it even more into a more manageable two songs out of the four.

The live side of the split LP with free-festival Hippies and allies the Here & Now band is blinding too – a surrealist punk version of Action, Time, Lemon kicking it off,  along with a manic wirey  Going Round In Circles.

I have to be honest though, the fourth CD  Snappy Turns, aside from the title track is painful and almost impossible to listen to in one sitting.

Because the box compiles, studio, live and sessions from the narrow timespan, consequently there are several versions of several songs – which to me (and completeists) adds to the (difficult) fun, hearing how they evolve and mutate.

Its not easy-listening and there is an air of madness and paranoia, stoked perhaps by heavy-dope-smoking, That aside, there is more inspirational vibrations, soul-searching, self-expression here than in probably any other punk bands complete works from the same years.

(Wot? Even the Clash?) This will sell a fraction of what the Clash boxed set sold. Which is ridiculous. But such is life. The true mavericks and innovators are not appreciated.  Mark Perry was and still is the restless spirit of punk as self-expression.  Soul-bearing and truth-telling. Uncompromising. For real.