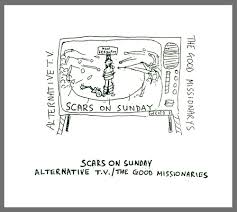 Reissue of the 1979 live album, originally released only on cassette by the Fuck Off label, with new sleevenotes by Mark Perry. Jointly credited to Alternative TV and the Good Missionaries, the name of the band changing after an incendiary performance at the Greenwich Theatre which forms the first part of this collection……LTW’s Ian Canty gets down to the Deptford Fun City sound of 1979…….

In “England’s Dreaming” Jon Savage describes Alternative TV as “straddling both axes (i.e. the social realism and art branches of Punk) but going weird fast”. The process was complete by the time of the tape release of Scars On Sunday, the title being a riff on ITV’s answer to Songs Of Praise. Mark Perry was of course one of ’77 Punk’s main faces, launched to the New Wave frontline by his pioneering fanzine Sniffin’ Glue.

His band ATV (after at first toying with the name the New Beatles) might have originally started with a relatively standard Punk sound seasoned with a little Reggae, as evidenced by the singles Life/Love Lies Limp, How Much Longer, Life After Life and Action Time Vision, but soon moved towards something far stranger. The negative aspects of the Punk scene had well and truly kicked in by the end of the Summer Of Hate and Mark P’s changing cast of cohorts wanted no part of turning out 1,2,3,4 identikit New Wave for the masses. A 1978 tour with Hippy heroes Here And Now was an early sign that they weren’t going to play the game, even by the new rules.

If first album The Image Has Cracked stretched the parameters, it had nothing on the follow up. Down to a core duo of Mark and his oppo Dennis Burns (with assistance from guitarist Mick Linehan and Genesis P-Orridge, who was supportive of ATV right from their early days), Vibing Up The Senile Man was the record that made PIL look like MOR Rockers. Remarkably creative and visionary, or unlistenable and confusing, depending on your viewpoint. I tend toward the former, for me they were logically carrying on the message of Punk i.e. anyone can do it, it didn’t have to be Rock ‘N’ Roll and you ought to push forward into the future, not stay forever in a spit ‘n’ spikes ramalama time warp.

This approach and their new material put them in somewhat tricky position in concert, one that is neatly summed up by the sleeve cartoon of Scars On Sunday – depicting someone tied to the spot with projectiles coming from all directions. Fans that had paid to see a set full of “Punk classics” in the Action Time Vision mode were instead being presented with challenging pieces that at times had only a slight connection to music at all. They were now far more concerned with pushing at musical boundaries and zeroing in on the sensitive parts of the human psyche that Rock & Roll wouldn’t and couldn’t. Something was bound to break….

By the time of the Greenwich Theatre show Dave George had joined on drums, despite his insistence that he couldn’t play them, with Anno from Here And Now also helping out on vocals. Scars On Sunday is, at least to begin with, not quite the Avant Punk Metallic K.O. you might suspect. In fact ATV seem to be getting a fairly decent reception from the assembled crowd, with any detractors not being captured on the recording at this stage. Set opener Nasty Little Lonely now sported an atonal sax line, but was still full of low-key menace and is greeted with some appreciation from the crowd at its conclusion (However the limitations of George’s drumming are immediately apparent – they can’t say he didn’t warn them).

There is an audible sense of unease that gathers pace as things go on though, both from the band and audience. It starts as shouts and screams as people realised they wouldn’t be hearing the Punk Pop “hits”. Also apparently support band Fashion had overrun on their set by some distance and this left ATV up against it time-wise (Perry claiming that The Force Is Blind will go on “for a couple of weeks”, when asked about the song’s duration after the lengthy The Radio Story/Lost In Room/Fellow Sufferer segue that preceded it). The tension is ratcheted up a notch further by this state of affairs, as the lack of time resulted in the gig’s organisers threatening to pull the plugs on the band. More than a threat as it actually happens on last track The Good Missionary, which leads to be band trashing their instruments and the palpable off-stage aggro. It is still shocking when that final chaotic moment kicks in, even a mite chilling 40 years on as ATV’s brave experiment to keep alive the true Punk spirit turned up its toes and died.

As it had become more than apparent that the Alternative TV name was causing them more problems than it was worthwhile dealing with, they took on the Good Missionaries moniker just a week after the Greenwich Theatre gig’s messy endgame. The Lyceum was the venue for the GMs’ debut, by this time Dave George had shifted to guitar alongside Sam Dodson, with Steve Jameson (who had contributed “3rd voice” to Smile In the Day on the Vibing LP) filing in on bass. Their one track here is Bottom Of The World, coming from a concert entitled “Gig Of The Century” (but this offering might lead you to ask “Which one?”). A long piece that touches more on Rock/Blues that what has gone before and audience chatter is captured here almost as well as the music. The jabs of guitar and bass surges provide the form, Mark singing a line that sounds a lot like “pretty little bingo” again and again.

Come the final two tracks on Scars On Sunday, recorded in May 1979 on the Animal Instincts tour with the Pop Group, The Good Missionaries had another reshuffle with only Dave and Mark retaining their spots. Dennis Burns was back on bass, ex-Chelsea/Damned member Henry Badowski filled the vacant drumming position (he also played some sax) and Gill Hanna completed the line up on vocals. This version of the band also recorded the Fire From Heaven album for Deptford Fun City on the same tour. There’s unsurprisingly a little more structure and purpose to these tracks, with final number The Morning They Took Me Away being a sharp re-imagining of ATV b-side Another Coke. I have to say though The Good Missionary Goes For A Walk is probably the best track musically on the album, a mesmerising atmosphere is evoked by the band that kept me rapt throughout the 15 minutes plus of the song. They sound a bit more more confident this effort, whilst not sacrificing the playfulness that was always inherent with the Good Missionaries/ATV.

After this the Good Missionaries continued on for a couple more years, eventually being taken over by Dave George when Perry dropped out. George based his new line up in East Sussex (Deranged In Hastings was the title of one record). Mark would record the solo Snappy Turns album and return to ATV with original guitarist Alex Fergusson in 1981, recording the most extreme follow up he could after Vibing – a great Pop Music LP in the severely undervalued Strange Kicks.

Scars On Sunday is faithfully reproduced by Winter Hill Recordings here and is a classic of the early UK tape scene, which shot up as an outlet for the outré through the Weird Noise/Fuck Off label amongst many others. This is most definitely lo-fi and not easy listening – a positive boon for ATV heads like myself and anyone deep into DIY/Independent/Tape Scene stuff, but those unfamiliar with the band would do well to start with the early singles and work their way forward from there. It may prove rewarding enough over time, but those fully conversant with ATV’s oeuvre will find Scars as vital as any, a true artistic statement from the heart of the struggle.

This is certainly not for people who want straightforward Punk Rock & Roll. Scars On Sunday is bitty, rough and even amateurish in places, but that was part of the point, to reach beyond your own capabilities for the stars and blast off into the space. By moving bravely into areas that Pop/Rock simply wasn’t allowed to probe it is very refreshing, as you can hear barriers being broken, the difference between performer and fan cut down to a mere whisker. I’m not going to insult your intelligence by suggesting this is a great album full of catchy songs you will instantly love – that was never the aim, but by always reaching for something new and different, Mark Perry and ATV/The Good Missionaries’ very ambition made it compulsive listening for me at least.