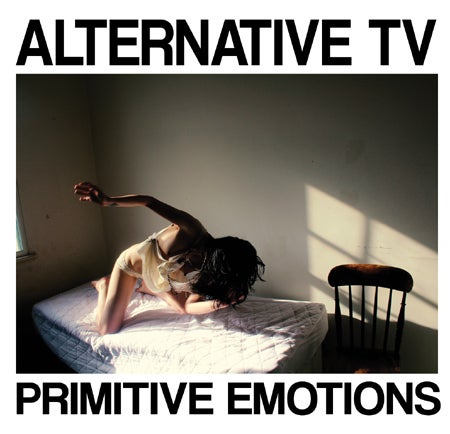 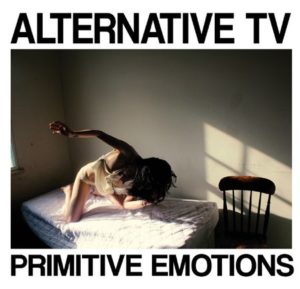 Collection that rounds up single, EP and compilation tracks recorded by Mark Perry’s long running Alternative TV from 2016 to 2019…..LTW’s Ian Canty views some of the more recent alternative transmissions…..

After seeming to reach a violent end in 1979 (see the review of Scars On Sunday here for further info), Mark Perry and Alternative TV somehow continued to bounce back through the years as a vital force. With different line ups, they peppered the decades after their original incarnation with great recordings. From the excellent Peep Show LP in the mid-1980s, to My Life As A Child Star/Punk Life ten years later, coming right up to date in the 21st century with Revolution and their last album Opposing Forces, which emerged in 2015. It was one of the year’s best, showing that ATV were still very much to be reckoned with.

Alternative TV have recorded and gigged sporadically since that last album and the former is what makes up the Primitive Emotions LP we have here. MP himself has said it hangs together like an album rather than a random bunch of off-cuts and who am I to disagree? The sleeve art itself is in classic Deptford Fun City mode and the first two tracks are from 2016 This Little Girl/Art School Project single. This Little Girl sets things in motion and from the word go it is clear they’ve lost none of their spark and cutting lyrical comment. A grimy buzz cuts across a relentlessly dirty groove and Mark intones the tale of the darker side of the human psyche, the titular girl who is “living in a nightmare of her choice”. B side Art School Project is more of a haunting, odd-pop effort, with a soaring synth line and jangly guitar. It also has a little of the feel of Victory from the Sex/Love single from 1986.

Next comes Negative, Primitive, which was released on 7 inch with Rebel Proof Glass. Negative Primitive has a coarse industrial dance beat, a metallic clang and guitar sludge moving steadily but eerily along with a chanted vocal on top. Rebel Proof Glass is a classic ATV in that it is a cutting critique of punk 40 years on, the tawdry sideshow of pointless anniversaries, gallery exhibitions and piss ups that just heap scorn on the original spirit without pause. The words pinpoint correctly “the hollow men of Britain” that “let us down again”. This is like How Much Longer 40 years on, refracted through the modern day’s sheen of permanent unreality, where a bare-faced lie is worth as much as the truth. This track is musically potent too, with electro scrawls moving menacingly around Mark’s echoing spoken/shouted word, making it spellbinding.

The four items that made up the Dark Places EP from last year follow. Powerful, cutting guitar attack heralds the start of The System, more of a conventional song with an acute lyric about how we’re all part of the problem of the modern world we help to create. Verlust finds the band down to a two-piece of Mark and Clive Giblin, not that you would know from the soundscape created. This one has chimes before a slow, swooping synth and piano set a widescreen musical landscape. Again the vocal is heavily echoed and the song could be part two of This Little Girl. It’s truly epic.

Vic Godard guests on guitar on Like A Tomb, cutting through the electronic disturbance and wobbles. Again like Rebel Proof Glass, this is spoken word with more than a hint of Vibing Up The Senile Man’s chilling atmosphere. The song concerns the gradual beating down life hands out to us all one way or another. This is haunting, bleak stuff no doubt, but conjures with ideas well worth considering. Her Dark Places follows, a Killing Joke type fiery intro chugs into acidic guitar and a song of doomed relationships. Again, like the last track, there’s precious little room for hope and brightness, but the storytelling is as sharp as a needle and spares no-one, not even the narrator.

Coming from the Fourth Dimension compilation album Presently Untitled, Radiator is kind of like electro R&B, almost industrial Bo Diddley. Just an electronic squiggle and vocal adorn the verses, with a metallic pulse tensing up the chorus. Next up is their most recent single Walls/Hollow Stream. Walls kicks off with some chiming sounds that could have come from The Force Is Blind and Mark’s distant vocal is backed with a more restrained rhythmic pacing. There is a curiously dreamlike appeal here, a lucid look at modern life’s way of keeping a person in line. B-side Hollow Stream is a mainly instrumental piece which begins in an experimental style with bangs and thumps, with synthesised rhythm occasionally breaking through. Eventually heavily processed voices penetrate in wordless fashion, screams of electric frustration.

Finally comes Chinese Burn, a different version to the one on the Low Expectations comp. This song has an almost glam/motoric drums, with vocals laidback and guitar breaking in noisily. This has a slight allusion to How Much Longer in the lyric, “wear a Nazi armband to your latest opening night”. Again like Rebel Proof Glass this decries the loss of rebellious spirit in the modern age and the abject failure of the blank generation. There’s some great bass playing on this and it provides a suitably spiky ending to Primitive Emotions.

Though a compilation Primitive Emotions shows why Alternative TV are still well worth your attention, this LP is intoxicating and at times suffocating brilliance. Few write any better about the less attractive traits of the human condition and the world we all help perpetuate than Mark Perry. The music here presents an updated but tough ATV, battle-worn but not at all weary, indeed as musically invigorating and challenging as they ever were. Mark’s still kicking against the pricks and the pricks that we became after the dream died – he’s a voice that needs to be heard and this compilation shows him and ATV are still cutting things in fine style.