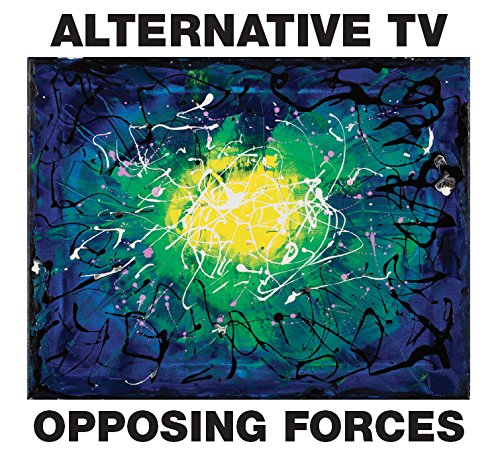 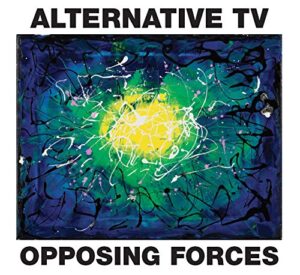 Opposing Forces is the new album from Mark Perry’s latest line up of ATV; arguably the great ‘lost’ punk band, the first ‘post-punk’ band, allies of the Free Festival Hippies and the band who influenced a hundred great bands over the decades since – and yet who get none of the credit. Until now – Ged Babey tunes in.

2015 and there are some great Punk Survivor albums being released; Wire, the Pop Group and the Nightingales have brought out absolute crackers, The Membranes have produced an epic, (The Fall have probably brought one out but I’ve lost interest in them), PIL and Penetration albums are on the horizon, Subway Sect and the Cravats are active and hopefully have releases planned … and now this… It really is as if the ‘Blank Generation’ are thinking: “Right, we’re not getting any younger, it’s now or never. One last album that says it all and blows everything that preceded it away.”

Alternative TV have a strong, settled line-up and are a well-oiled post-punk rock ‘n’ roll machine. Well, kind of. They have three guitarists including Mark P, giving the album a ‘heavier’ sound than some of the previous work bearing the ATV name.

For once the accompanying press release actually gets it right, without exaggeration or hyperbole: “Alternative TV continue to defy categorisation, pushing their own musical boundaries whilst declaiming uncomfortable truths.”

An honourable mention must go to Dave Morgan (The Loft, The Weather Prophets, The Rockingbirds) who as well as drumming on the album produced & mixed it at his Big Fish studios in St Albans. He has done a great job.

Lee McFadden and Clive Giblin on guitars and Steve Carter on bass have also created a near-perfect backdrop for Mark Perry to express himself on what will come to be regarded as one of Alternative TV’s most intense and engrossing albums.

There are (at least) three songs on Opposing Forces which are among the best things they’ve ever done. If, like me, you consider Still Life, Punk Life and Communication Failure to be three of their finest then Stars, The Tension Between Order and Chaos and the title track are just as good. The first two are genuinely psychedelic. Full blast on headphones on a sunny day and they make everything melt away, blow-torching every thought in your head.

Below is the title track. As an opening salvo you can’t get a stronger, more snarling statement of intent from a band with a hell of a history but who haven’t released an album for 14 years.

The line “…can you face the realisation that nothing really matters” adorns the inner sleeve of the CD clamshell case and it’s arguably the most scarily nihilistic statement made in rock ‘n’ roll for some years.

‘Stars’ is one of those songs that only Mark Perry could have written. Musically it is built on a nasty but beautiful repeated dirge of a bassline, has no drums and wonderful stratospheric synth and guitar lines. The recited lyric is bizarre and seems to be from the point of view of an interplanetary entity looking down on earth for the essence of cosmic significance and cataclysm and finding it in the moment ‘The Kids’ discover the power of rock and roll… I think. Once they find ‘the geometry that will take them to another plane’ and out of their mundane lives and literally, into the stars.

It might well sound like hippy nonsense but it’s an amazing piece of a-r-t rock nonsense and if psychedelia is about transforming the moment and taking you somewhere else and uplifting your spirit, then this song does it. And so does the next one…

‘The Tension between…’ is like a sequel to Action Time Vision; chunky slices of guitar which veer off into intense new territory… inner-space rock. I dunno, it’s just one of those songs that you ‘feel’ but you can’t describe just how magnificently real and wonderful it is. (Maybe it just soundtracks my life and its traumas and dilemmas at the moment…)

Ironically, there are a couple of songs which seem to be about Mark Perrys love life and / or libido  –  French Girls has him narrating a song about the titular femmes in a manner which maybe doesn’t quite suit his age.   And another song has a lover ‘looking sexy in her ‘knickers and boots’. Over-compensating for his Love Lying Limp all those years ago maybe?

Basically though, it’s a combination of madness, sex and honesty and in an armour-plated post-punk sound. Musically muscular. Lyrically idiosyncratic and genius in places, flawed in others. Which has been the case since the start in a way.

Hello New York is a great piece of Buzzcockian flavoured rock’n’roll  and Bubble a strangely romantic confessional with some nice guitar steals from Autonomy.

Winterlied a tale of paranoia with phased ‘How Soon Is Now’ guitars and a Velvetsy feel.

The Rambling of Madmen is another strong track, with a distinct Pixies feel to the guitar, discussing whether biblical prophesies (Like the Burning Bush) were just stories told by undiagnosed paranoid schizophrenics. This is not a flippant song. Mark was involved in a ‘Mad Pride’ civil rights campaign some years back so when he sings about how the only things he can predict is that ‘the sun will rise tomorrow and the rambling of madmen, will one day be sacred texts’ he’s not mucking about.  Alternative TV have always dealt in serious truths and saying the unsayable;  ‘Life’s about as wonderful as a tramp lying dead in the road’ remember.

Like The Membranes Dark Matter album ATV wrestle with big ideas about life, existence and so on, within their music. Stars and the Tension between would not be out of place on John Robb’s band’s album.

The thing about ATV are their flaws which make them perfect. And the stubbornness and unwillingness to take the sensibly commercial path. There are a couple songs which, in my opinion don’t work. The experimentalism leads to inconclusive results and the ‘experiment’ needs to be done again, under different conditions (played live a few times maybe, shortened or sped up…). The Visitor, with its echoes of Genesis P Orridge is the one I’m talking about. ‘Dream’ with its clunky Lennon piano is another misfire, despite a dryly funny lyric, but the rest of the album balances it out with its energy and malevolence and basically, great music.

I’m tempted to say its as good as the latest Wire album and makes more of an impact than any of the other aforementioned punk survivors releases this year (bar The Membranes of course and I don’t say that just because JR is ‘the boss’, it’s just a fact).

I look forward to seeing Alternative TV play this live, with the clarity, precision and cosmic malevolence that they’ve captured on the recording, because that’s the only way they could better it.

All words by Ged Babey whose author’s archive is here.