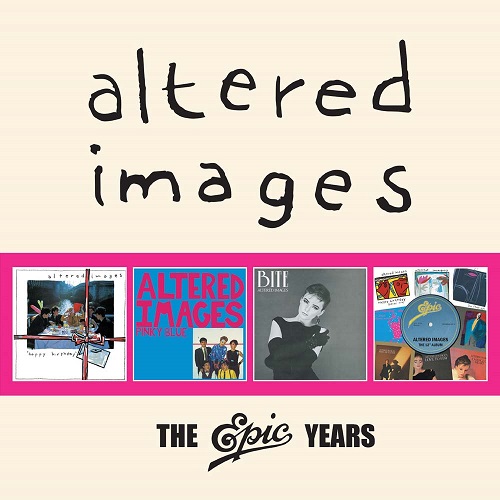 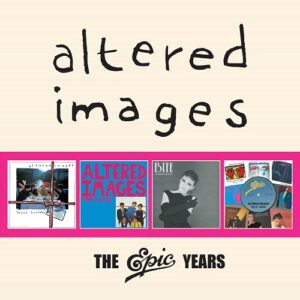 From the ashes of punk rose the phoenix of pop with Scottish band Altered Images. A demo tape to Siouxsie And The Banshees resulted in a slot as their support act, being championed by John Peel and a debut album produced by bassist Steve Severin, it all seemed so easy and, it probably was as the they signed a major deal with Epic. Producing the whole of Altered Images’ debut album Happy Birthday (with the exception of the title), Severin helped it stay in the UK charts for over five months spurning three singles.

The band’s debut single Dead Pop Stars couldn’t have had a more unfortunate start when its release came shortly after the death of John Lennon. The track failed to make the final version of the album but does appear here as a bonus. The album itself was raw, with vocalist Claire Grogan often sounding childlike, sometimes charming and always textured rather than formatted. It did however, carry an intrigue and an excitement which still resonates today with effective guitar work courtesy of Tony McDaid, frenetic drums from Tich Anderson and bass via Johnny McEhlone (who would later go on to form the mighty Hipsway and the less impressive Texas).

Written because they wanted to be on Top Of The Pops and convinced that “everyone will buy” it, the single Happy Birthday was produced by Martin Rushent who was enjoying success as the producer of the Human League’s gazillion selling Dare album. It appeared in three version on the album – as an Intro and Outro as well as the single that reached number 2 in the UK singles chart. It was starkly different to the rest of the album making a pop classic in amongst the anarchic angst.

The bands second single, A Days Wait remains an angry, pop-bordering tune to this day and even instrumental Legionnaire is enjoyable in an era minded context. Whilst the album has obviously dated there are still several gems to enjoy notably Real Toys, Leave Me Alone and the creepily infectious Insects. An additional seven bonus tracks feature including a cover of the T Rex classic Jeepster which gives an interesting punk take on the Bolan beauty.

Released in 1982, the bands second album Pinky Blue became the subject of the well-known British media backlash. Following the success of the Happy Birthday single the band moved further into pop territory with Rushent producing the whole album. Despite receiving a mixed reception, it became the bands highest charting album with some well-crafted songs including several ‘tricks’ that Rushent had used on the League Unlimited Orchestra (aka Human League) album Love And Dancing. It was in many ways perfect pop with singles in See Those Eyes, I Could Be Happy and the title track – John Peel continued his affinity with the band as he made an appearance on backing vocals and ‘whistling’.

Pinky Blue was a lively album, high paced pop with Forgotten and Little Brown Head with Grogans vocals more powerful and controlled than its predecessor whilst still maintaining a slightly anarchic sound. She was by no means the greatest singer but somehow her vocal ‘shaping’ and energy made her incredibly distinctive and addictive.

Inclusion of the cover version Song Sung Blue (Neil Diamond) was strange. It seemed misplaced and frankly didn’t particularly do the song justice – if meant as a joke it was more crinegworthy than amusing. Seven more bonus tracks are included with new versions of Insects, Real Toys, Dead Pop Stars (renamed Disco Pop Stars) and Happy New Year, a festive message from Clare over the Happy Birthday tune which was given away as a part of a Flexipop magazine flexidisc (Google it kids).

The final Altered Images album, Bite, saw them up their game tremendously starting with the Audrey Hepburn esq image of Grogan gracing the album cover. Her voice was stronger and more mature than before and the production of Tony Visconti (David Bowie, Sparks, Thin Lizzy) and Mike Chapman (Mud, Suzi Quatro, The Sweet) aimed for a classy album. In many ways it succeeded, with its first single, Don’t Talk To Me About Love becoming one of their biggest hits. Sadly, subsequent singles Bring Me Closer, Love To Stay and Change Of Heart marked a slow decline before the band finally went their separate ways.

Bite marked another solid pop album with – a pleasant change for the 80s – no ‘filler’ tracks. Love To Stay was gorgeous and deserved far more recognition than its number 46 chart placing and Don’t Talk To Me About Love remains a cracking pop tune to this day with its Donna Summer/Blondie alliance and hi-energy backbone.

The album went for class with an quartet of additional backing vocals adding depth and warmth to the proceedings and largely succeeded in every respect though short at just eight tracks. Another six bonus tracks are here including a suspicious ‘live’ version of Another Lost Look which at one point seems to have Grogan on lead and backing vocals at the same time.

Disc four of the set is The 12” Album with eight tracks from across the bands career given the dreaded 80s remix treatment which usually meant a part of the song instrumental attached to either the beginning or middle of the song. Maybe one for the collector as it doesn’t particularly tread new ground but does complete a fascinating journey through the short career of one of Scotland’s finest and most memorable acts.

Clare Grogans Altered Images have a Facebook page here. She can be followed on Twitter as @claregrogan2.

Interview: One on one with Philadelphia’s Tulipomania

November 16, 2018
We use cookies to ensure that we give you the best experience on our website. If you continue to use this site we will assume that you are happy with it.Ok