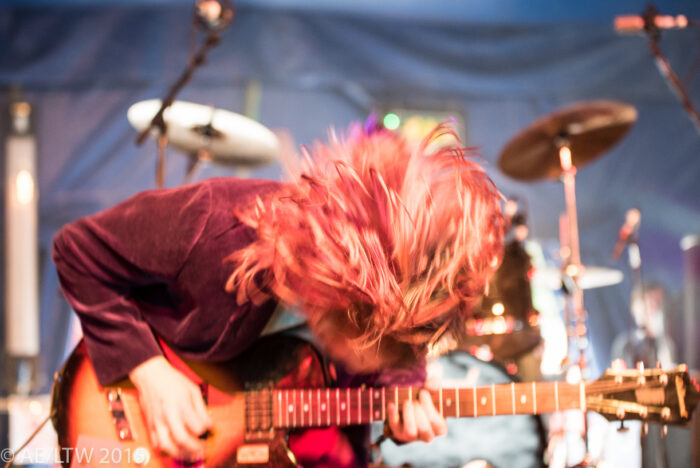 British newcomers Allusondrugs made their debut appearance at this years Download Festival.  The band have been making quite a splash on the UK rock scene after touring with Enter Shikari earlier this year.  Louder Than War’s Alan Ewart caught up with the band before their set and then caught the show.  So how did they get on?

I caught up with Allusondrugs before their set on Jake’s stage at this years Download.  The guys were incredibly excited to be playing at the festival and were really hyped for their set.  Writer and guitarist ‘Daymo’ acknowledges that they learned a huge amount from touring with Enter Shikari earlier this year, stage craft and the amount of work that goes into producing a major tour were high on their list of lessons learned.

The guys cite a wide range of influences on their sound, Oasis and Blur amongst them but Daymo claims My Bloody Valentine as his biggest influence though they were keen to point out that they very much create their own sound and that each member of the band brings something to the party.  The band are often pinned with a psyche grunge label and they do acknowledge that there are elements of grunge in their sound.  They are reluctant to be typecast as they are a young band, still developing their sound and learning their craft.

When writing and recording Daymo is normally the one to bring an idea to the table but everyone in the band has a say in bringing the song together to from their unique sound.

Onstage it is clear that Allusondrugs are tight, that they enjoy working together and they love being on stage.  The energy is palpable and they work the crowd into a heaving sweating mass in no time flat.  The sense of excitement comes in waves from the stage and sweeps the crowd along with a maelstrom of driving guitars.  The band lose themselves in the moment, frontman Jason twitches and jerks around like a modern day Ian Curtis whilst “Daymo” gets lost under all that hair.

Allusondrugs are clearly feeling the love and they give it back in spades.  Like Enter Shikari before them Download could just be the platform that pushes them on to bigger things.

The band have recently been in the studio with producer Tim Atack and have some songs laid down for a new release at the end of the summer.  Hopefully we won’t have to wait too long for an album but their relentless touring schedule is likely to get in the way of that, especially as it has now leaked that they will play the Vans Warped Tour at Alexander Palace in October alongside the likes of Black Veil Brides and Asking Alexandria.

If excitement, energy, enthusiasm and hard work count for anything in the music industry the hype might just be correct in claiming that Allusondrugs are British rock musics “next big thing.”

AllUsOnDrugs have a number of festival performances lined up over the summer.  Details are on their website.  The band are on Facebook and they tweet as @allusondrugs.