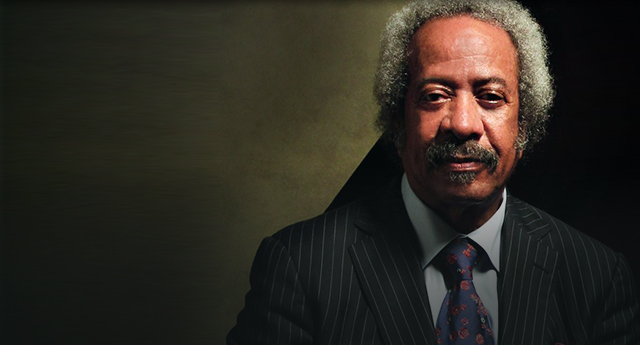 Allen Toussaint made his return to London for a two night residency at Ronnie Scott’s. Louder Than War’s Craig Chaligne was there for the first one.

After listening to Toussaint’s excellent Songbook live album recorded at Joe’s Pub in New York in 2009, I finally had the chance to catch him live last Monday at the first of his two shows at Ronnie Scott’s Jazz Club in the heart of Soho. It was my first visit to the place and despite being an impressive looking venue, the airs and grace it tries to give itself and the rather haughty attitude of the staff left a bad impression. The face of disgust the waiter pulled when I asked for a pint and his reply (made with pursed lips) that they only served bottles achieved to make me feel I definitely didn’t belong there.

The evening’s opening act featured Ronnie Scott regular Nigel Price who has appeared at the club more than 400 times. Backed by a double bass player and a drummer, he shared the stage with saxophonist Vasilis Xenopoulos. Their mellow set of jazz instrumentals proved the perfect opening act for Allen Toussaint. Toussaint has played numerous times in London over the past years and he greeted the audience enthusiastically even congratulating the people on the far right of the venue who “would be seeing the back of his head for the whole performance”. Toussaint’s return to performing was triggered by his 2006 album collaboration album with Elvis Costello “The River in Reverse”, the setlist at Ronnie Scott’s would have sounded familiar to those who had been listening to Songbook. He introduced the show with his “songs I glad I didn’t write” joke that he also uses on the record. Nevertheless you can feel that his performance has been polished to perfection by several years of steady touring. Effortlessly linking some of his most famous songs in medley form (“Certain Girl/Mother-in-Law/Fortune Teller/Working In The Coal Mine), he also showcased with parsimony his prowess on the piano with a few instrumentals including a fantastic version  of “St James Infirmary”. Toussaint was content to let his songs and his honeyed voice do the talking for him but he occasionally paused to recall the artists who covered his songs. He recalled his great partnership with Lee Dorsey several times, at one point saying that he was still writing songs for him even though the great R and B singer passed away in 1986. Southern Nights was introduced by a tale of of one his encounters with legendary singer Frankie Miller and of the Scotsman’s penchant for warm beer.  Toussaint managed to entice a piano player in the audience to play with him on a boogie woogie number and joked that one of his most covered songs “What Do You Want The Girl To Do”  had sold 4 records when he put out his own version of it, then replied to the audience’s laughter : “that’s not funny”. A fine evening of music filled with fabulous songs, warmth and humour.