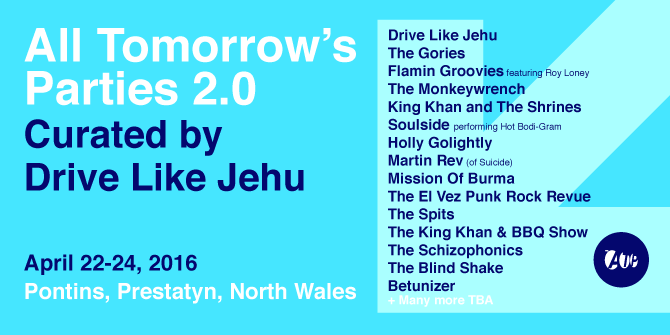 Looks like next weekend’s All Tomorrow’s Parties curated by Drive Like Jehu has been cancelled. It was due to take place in Manchester after earlier problems caused it to relocate from Pretatyn.

Around 6am this morning (18 April) John Reis posted a statement on his Facebook page seeming to confirm the cancellation. It read:

“All Tomorrow’s Parties CANCELS ATP curated by Drive Like Jehu in Manchester via Prestatyn.

“After 4 months of a long and bumpy ride, the wheels finally fell off the wagon and crashed and burned. A search party was sent to Monkey Island to scan the wreckage for survivors and only found Barry Hogan/ATP collecting bits of luggage and body parts for his next show “ATP 3.0 The 90’s Deconstructed”. Tickets on sale now at Gofundme.com

“It’s a uniquely cruel hoax to appeal to Drive Like Jehu’s ego and ask us to create a program based on personally inviting the bands and musicians that have inspired us and changed the way we hear music and then subject them and their supporters to this. We really wanted this show to happen more than anything. It had all the makings of a legendary weekend. We were so committed to seeing this through that we remained hopeful ( blind in retrospect) amongst the ritualistic turmoil and crisis and trusted their solutions that would ensure that the show would definitely go on and the attendees would be treated fairly and the bands would be respected and celebrated.

“I realize people want answers. I have found out about most of the information involving the problems that plagued this from the start the same way as everyone else. And although the internet is hardly a reliable source for fact, this whole mess has the extra sting of this not being an isolated incident.

“48 hours ago word started to trickle in that Barry hadn’t honored his agreement with many of the bands. These bands were not cancelling, but rather did not have the promised means to attend. It was only then revealed that ATP was unable to honor the agreement with the ticket holders that purchased accommodation. ATP is out of funds. ATP offered to postpone the event until November as a solution. No thanks. We looked into trying to salvage the weekend by putting on our own free show in Manchester. But at this late date, no suitable venue is available.

“This affects the Swami John Reis & The Blind Shake shows that were to follow ATP as well. We are unable to come over at this time.

“To all the bands and ticket holders, i couldn’t feel more terrible that the fest isn’t happening. We were willing to come over under any circumstance even if it meant we would not get paid, just to see this show happen. I wish i could give you more answers at this point and advice what to do next.”

Bands are currently tweeting about their experiences with ATP with Hookworms tweeting: “deeply cared about tap and was thrilled to play for them in the past but the way they’re leading ppl on now is grossly immoral.”

The band were due to play 2014’s Jabberwocky Festival, which was promoted by the ATP team and cancelled after persisting money issues.

There has been no statement from All Tomorrow’s Parties about next weekend’s planned event at Victoria Warehouse, Manchester at this time.