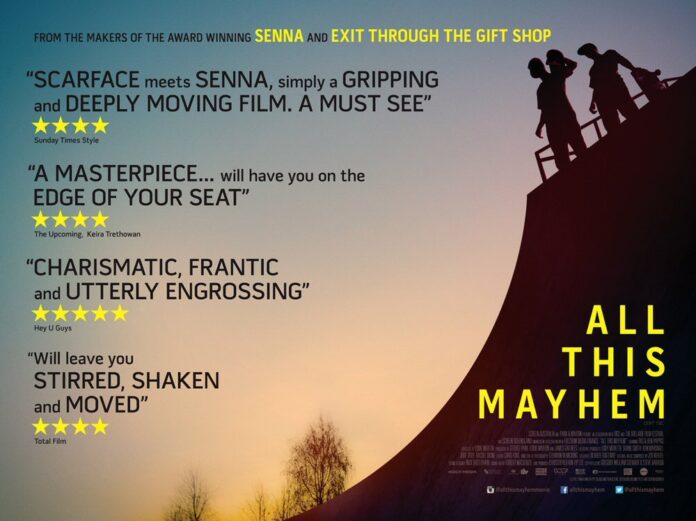 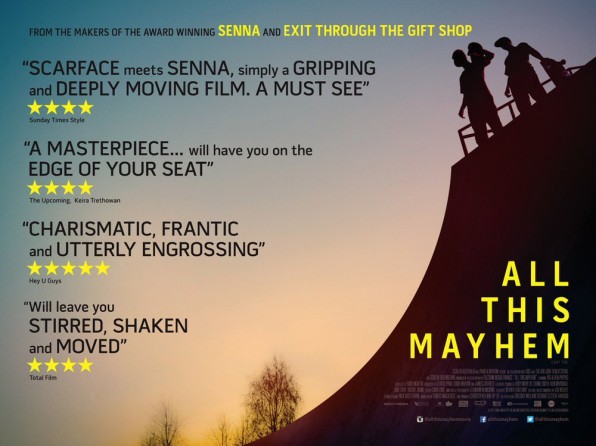 All This Mayhem is a documentary that “uncovers the world of drugs and unfettered hedonism that went on during the glory days of professional vert skateboarding.” It’s made by some of the people behind Senna and Exit The Gift Shop too, both of which were critically acclaimed. How does it compare to them? Louder Than War’s Jamie Havlin reviews.

After watching All This Mayhem I found myself briefly imagining this feature length documentary as a Scorcese style movie opening with a hopeless attempt by a drug-addled wreck to smuggle a kilogram of cocaine from Argentina past airport security in Melbourne.

We’re informed that the film is based on a true story and then see a close-up of the would-be smuggler. He’s nervous, a bead of sweat snakes down from his brow and there’s maybe even a little white powder visible on the tip of his nose.

The second he enters the airport, sniffer dogs begin howling and two Customs officers exchange knowing looks. Everyone he passes stops and stares and no-one, least of all the man himself, is remotely surprised when he’s politely asked by security to accompany them for a search that reveals his utterly inept attempt to wrap the drugs around three skateboards with tape.

Cut to: A flashback where we see him as a kid skateboarding up and down a ramp with his brother. They’re two daredevils, their raw talent already unmistakable and some of their mid-air acrobatics every bit as accomplished as the smuggling attempt was amateurish. A voice-over from a working class Aussie guy informs us that he always wanted himself and his brother to be the best, the most exciting skateboarders on the planet and he always knew that was what they would become.

The story of Tas and Ben Pappas certainly has the kind of spectacular rise and meteoric fall story arc that drew Scorcese to Henry Hill’s autobiography Goodfellas and Jordan Belfort’s The Wolf of Wall Street and at times the Pappas’ story really does almost defy belief.

In the middle part of the 1990s, Tas and Ben took the world of skateboarding by storm and in All This Mayhem, Eddie Martin tells their story by mixing together archive footage – and luckily even in the era before YouTube, skaters keenly filmed their exploits on camcorders to share with fellow enthusiasts – along with news clips, TV appearances and new talking head interviews shot over a four year period.

Interestingly, Martin, a former skateboarder himself, knew the pair back when they were growing up in a down-at-heel suburb of Melbourne.

Tas self deprecatingly describes their background as bogan – local slang for white trash. ‘My parents used to fight,’ he explains early on. ‘Dad would hit Mum and then she would grab an ashtray and smash it in dad’s face and there’d be blood everywhere.’

Skateboarding offered an escape from this environment and luckily enough, both Tas and Ben were naturals, happily spending long hours practising at a nearby skate park.

Tas, who’d previously been given lessons in the martial arts, thought he was Bruce Lee and took his in-yer-face attitude to life into skating. Already as a youngster in Australia he was dreaming of a move to America and ‘smashing’ Tony Hawk, the poster boy for pro boarding and it wouldn’t be long before he’d get that chance, moving while still in his teens to Tampa in Florida with nowhere to stay but a burning ambition to succeed.

Ben, the younger sibling by two years, was more laid back and open minded but once on the vert ramp he was just as reckless as his brother, who he joined in the States when he was still sixteen. Being away from the family home – even though that family home was clearly dysfunctional – was in many ways a recipe for disaster but the brothers’ performances were always encouraging, even for instance, when Tas would skate while tripping on acid.

Within a decade of first stepping on to a board, Tas, had desposed of Tony Hawk to become the world’s number one vert skateboarder, while Ben, who himself looked as if he would make the top spot, eventually just missed out and ended up as world ranked number two.

Here Hawk is presented as the sport’s corporate friendly favourite, the sell-out who favoured safe routines rather than risk-taking, a polar opposite to the edgy Australian rebels with the don’t-give-a-fuck attitude.

Even though I fully believed one of Tas’ skating buddies when he described Tas as ‘a natural asshole’, I was happy to see what appeared as a triumph for the outsiders, who clung on to the roots and ideals of their subculture, over the sport’s All-American golden boy, although it would have been good to find out Hawk’s thoughts on the criticism levelled at him – sadly though he repeatedly declined the opportunity to be interviewed.

Having reached the pinnacle of their ambitions, the idea of a protracted level of success for the partying Aussie upstarts was always maybe unrealistic; in fact, it would be hard to find a pair less well equipped to deal with the limelight.

Immediately their excesses went into overdrive and there followed a downward spiral of self-destruction involving Mötley Crüe amounts of drugs, the aforementioned drug smuggling, domestic violence and prison for starters and it would be unfair of me to list the full details of their demise.

Frank and at times frantic, cautionary but compelling, All This Mayhem is maybe the most engrossing documentary of the year albeit it’s not without flaws.

The Tas and Ben rivalry with Tony Hawk is undoubtedly interesting, just as the conflict between Ayrton Senna and Alain Prost was in the 2010 documentary Senna (both documentaries share an editor in Chris King) but it’s the period after the Pappas’ mid 90s heyday that will live longest in my memory.

Unfortunately this part of the film was rather rushed although Martin does present viewers with some unquestionably disturbing footage, such as the shots of a wasted Ben, aged 25, looking almost impossibly old for someone that age.

More problematically, Tas, who’s very self critical of his own faults, gets nowhere near to showing the same level of critical awareness where Ben is concerned though maybe this isn’t too surprising given the pair’s intense fraternal bond.

He shows no regret for the fate of his girlfriend Lynette Phillips; instead he labels her a junkie and blames her completely for Ben’s descent into heroin addiction. An accusation about his father embezzling cash from their sponsors is also glossed over and it’s hard not to think back to the very outset of the film when Tas acknowledges that there are three sides to every story. ‘My side. Your side. And the truth.’

Disappointingly, in All This Mayhem we tend to hear only one side and that that side belongs to Tas and this is what makes the documentary only a very, very good one rather than the masterpiece promised on the film’s promotional poster.


~
All This Mayhem is currently available to view on iTunes, whilst the official website of the film can be found here.