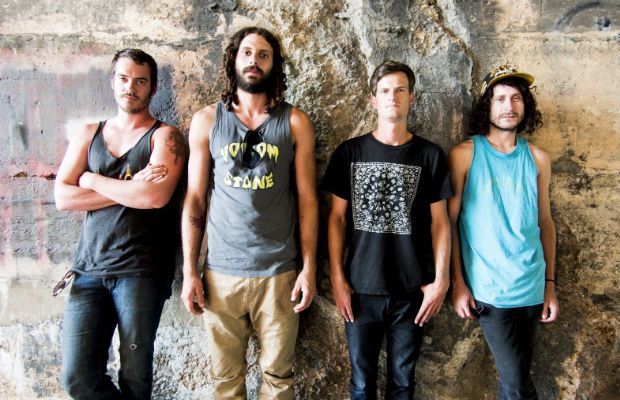 There is nothing like discovering a new band! Maybe not new to everyone else but new to me.

Although saying that, All Them Witches are a relatively new band. Formed out of the musical mecca that is Nashville, Tennessee in 2012 and forged through a shared love for Blue Cheer, Black Sabbath, Led Zeppelin, Mountain, Gris-Gris and Sun, Moon & Herbs-era Dr. John, and the electric Delta swamp blues of Junior Kimbrough. All Them Witches are unapologetic about their use of the music of earlier eras in creating a loose, spacy, hard rock sound of their own. Fronted by bassist Charles Michael Parks, Jr., the line-up is rounded out by drummer Robby Staebler, guitarist Ben McLeod, and Allan Van Cleave on Fender Rhodes, organ, and other instruments.

This is the first date of their European tour and their first time in Bristol. Also, it’s the first time they have played inside a boat as Parks states later in the set. Greeting the crowd, the band exude a humble humility. They seem almost shy and this is all a part of their charm as they break into a drum heavy, ‘The Dirt Preachers’ ramping up the tension before the release of it’s end section and the lush lead guitar lines of McLeod. Parks plays a mean melodious bass and none more so that on their track, ‘Charles William’ from their 2013 album, ‘Lightning At The Door’. The instruments spiral and connect in a bluesy concoction bruised by the cradling beats of Staebler’s drumming, and of course the Fender Rhodes sound of Cleave on the right hand side of the stage is integral to the ‘vibe’.

The dynamic between the members is palpable. You can feel every nitty gritty intention and on tracks such as, ‘Death Of Coyote Woman’ and ‘Elk.Blood.Heart.’ where they extend the riffs into a groove jam, sticky and sultry to the ear, entering Pink Floyd territory in tone occasionally. It’s one of those close your eyes and let it wash over you moments that make one smile with the veritable warmth of their delivery. ‘Open Passageways’ off their 2015 album, ‘Dying Surfer Meets His Maker’ is a highlight for me with it’s leading momentum, giving me the voodoo chills that feel like a magic is being worked upon us. It’s a revelatory night for me and I look forward to the new album that Parks hinted at in one of his relaxed exchanges with the audience. Seek and ye shall find.