Home Music Bands All punk rock is queer: Why Pink Suits are the most vital... 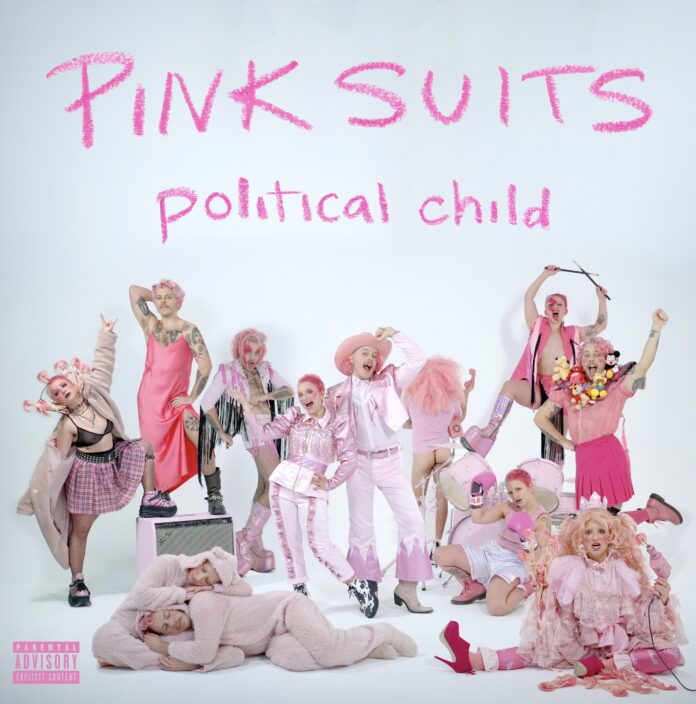 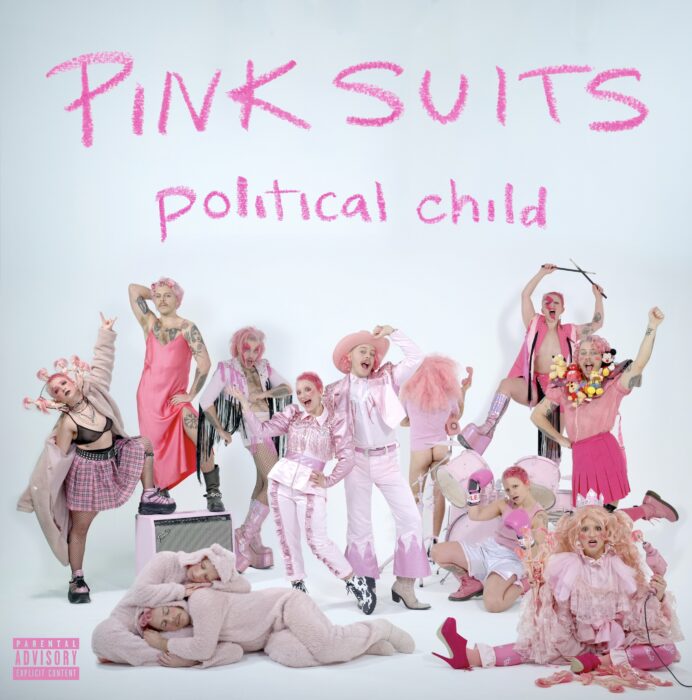 all punk rock is queer

All punk rock is queer: Pink Suits are the latest, greatest, queerest and gayest but at the same time the most raging & uncompromising, political punk band since Crass. (Or maybe since Bob Vylan. And Benefits. There are a lot of new rage bands around in 2021.)

Only they dress in pink – because (as the song goes) Pink Suits Everyone…and who is gonna take any notice if they look booor-ring! They aren’t drag queens or kings – just messing with stereotypes and preconceptions…

Instead of being a standard-issue four straight dudes with guitar / bass / drums hoping for a decent slot at Rebellion, they are two, non-binary people who are recently self-taught musicians. And they are angry about everything: The politics of now, the erosion of freedoms, bigotry and the poverty and suffering of the vulnerable. Their own descent into and out of mental health anguish.

Like Crass the protest & activism is as important perhaps as the actual music(ality). The look and choreography all play a vital part too.  The revolution has got to involve freewheeling fun and looking fabulous-darling…

Guitarist Lennie is the one with a moustache and drummer Ray the pink suedehead. The music is, shall we say, basic. It is the lyrical content which doesn’t pussyfoot and the delivery which can strip wallpaper and blast pigeons out of the sky.

Ray has a voice that is feral: coruscating and corrosive. It sounds like a screech-owl having a tantrum at times -but in a good way!  Lennies vocal intonation brings to mind a more snarky, snarling Chumbawamba. They make a great tag-team.

pink suits work is an exploration of sexuality, fantasy, mental health, politics, activism and is a resistance of binary gender, questioning how voices and bodies can be used as a form of protest.

Which makes it sound a bit worthy and preachy… but when it manifests itself like this… it’s not.

Your time is up motherfuckers! / We see you! We know you! We’re gonna burn your fucking house down! / Little piggy fuckers! / We are the wolves!

Oh, we came late to this fist fight /  But we came with dynamite  / we’re coming for you and we’re gunning for change /  you’re gonna hear our noise you’re gonna feel our rage!

The self-imposed format, twin-vocals with both playing guitar and drumming respectively at the same time, leaves little room for musical nuance and at times it has technical wobbles – but the sheer anger-generated energy could power a small village.

The dynamic power duo is a not so new and not-so-secret formula: White Stripes legacy perhaps. And it is eveywhere: From the mainstream Royal Blood to Sleaford Mods to the undergrounds AlterModerns.  For reasons of economy it works, stylistically looks good – but demands two determined, like-minded people working in perfect unison.  Which they do.

On their 13-track debut album, Political Child, there are several songs of self-analysis and self-doubt – about insomnia (3 am) and mental health issues (This Hole, Scarred) which are equally powerful as the ones about what they call in one song ‘Anarchist Wisdom’: a spewed out list of racists, homophobes and misogynists in positions of power – and a song which breaks no end of ‘community standards’ and guidelines, and which you will never hear on the BBC.

Be The Best concerns how keeping the working class poor means there is always a generation of available young cannon-fodder. It’s a darkly comedic rap over the kind of military drumbeat Penny Rimbaud used in Crass.

Keith Goldhangers review of the Political Child album pointed out similarities to Flux, Dirt, Chumba but there is also a strong Bikini Kill and Huggy Bear vibe going on. Thing is, Pink Suits audience ideally needs to be 12 to 16 year olds who know nothing about anarcho and riot grrrl history -they need to be the First Punk Band You’ve Ever Heard to have that life-changing effect… that the Pistols/Crass had on us veterans…

I can’t help but think of much-missed Candiflp Blackwood from Anarchistwood when I listen to Pink Suits. They would have bonded.

It’s long past time the UK had an all-new, in-your-face, boy/girl/nb/queer punk-rock riot of a band and at last Pink Suits are here. They are fucking absolutely fabulous.  All Punk Rock Is Queer?  Pink Suits Everyone.

All Punk Rock is Queer …. a rough guide

“Well, originally ‘punk’ meant a guy in prison who got fucked up the ass…”  Says a noticeably smirking James Chance when asked to define punk, right at the beginning of Don Letts Punk: Attitude documentary.

in 1976/77 punk found its home in gay clubs: the Roxy was previously Chaguramas.  The Bromley Contingent hang out was lesbian club Louises.  In Manchester Pips and The Ranch were where the nascent punk scenesters met, thanks to Pete Shelley…

Jayne (then Wayne) County was a trans-sexual pioneer and under-appreciated cultural force of nature, with a band to rival the New York Dolls (who were straight-boys who discovered cross-dressing got them more “chicks”).

The out-and-proud, but musically dull, Tom Robinson took his plodding singalong Glad To Be Gay into the charts and the nations living rooms, remarkable only for the fact it’s sarcastic assertion that ‘The British Police are the best in the world..’ didn’t get it banned.

In the same way as reggae allied punks with black youth, punks adopted a kind of a rebel camp due to the Glam Rock influence of Bowies alien bisexuality.

Punks self-identified as outsiders and outcasts – which put them in the same role forced upon the openly homosexual when walking the streets at night. With the same results:  Rotten and Ari-Up were victims of knife-attacks in 1977.  Royalists and aging Teddy boys beat-up punks on Provincial streets.

Punk-bashing, how smashing, this aint the summer of love – sang Southampton punks Stratejacket. It made a change from queer-bashing I guess.

There is a long and vibrant streak of queerness than runs through punk rock history from the beginning.

The US has the wonderfully named Pansy Division and a hundred others….  RuPaul started off in a supposed ‘punk band’ called Wee Wee Pole… there is a whole hidden history just waiting to be discovered. Start here and here.

What else can I say, everyone is gay – sang young Kurt Cobain of little-known Seattle band Nirvana…

All rock’n’roll is homosexual is a slogan thought up by Richie Edwards from the Manic Street Preachers around 1990. (Yeah! I’ve bastardised it)

In the Guardian in 2012 Nicky Wire said “I’m sure it’s slightly nicked. I remember Richey talking about self-love being such an essential part of rock’n’roll. That seemed to be his twist. It fitted into a lot of what we believed in: narcissism, nihilism, self-love, self-delusion. All those things made for thrilling rock’n’roll.”

So I thought I’d paraphrase it to discuss and promote the work of Pink Suits …..  because, there is truth there and, yep, it might trigger the inevitable ‘backlash’ from the bigoted section of the so-called ‘punk community’.  ‘All publicity is good-publicity’ after-all, isn’t it?

Well, no, not when you look at the experience of abuse and death-threats received by Bristol feminist band Menstrual Cramps….

‘Ownership’ of punk is hotly contested. The Punk-for-Lifers, the reactionary core of the self-declared old-guard who insist that Anti Nowhere League and the Macc Lads were the punk-as-fuck pinnacle and who rate Farrage and Trump as ‘punk’…  They treat young politico punk bands with disdain and sometimes outright hostility. Punk was never just white, straight and working class though… even if a lot of participants were.

but it’s Pink Suits who carry the torch for true Punk Attitude and for punk as a force for change… outside of society, outside the music business and draped in a Pink Flag instead of a Union Jack.

I know which side I am on.

Ged Babeys FB tag-line ‘I am a cross between an evangelist and a clown’ is ripped off from Quentin Crisp.  He is not gay, but has been an ally since being beaten-up for being an eye-liner wearing punk in 1981.