Bjork arrives for her first show in London for years. It’s bonkers, it doesn’t quite work in a flat field after a whole day of scorching sunshine and dancing in the dust – but it’s better than a two-bob pub rock band asking us every five minutes if we’re having a good time, writes Keith Goldhanger.

Benin City are in the tiny (and hugely warm) JagerHaus shed.

A large number of attendees here will get home later and declare this their day’s highlight. No one leaves this small area disappointed: they’re one of those bands that’ll get to grace stages that increase in size as the next few months go by. The songs, the feelgood vibe this trio give out and the forthcoming album are all there. Ready for the world once the world decides to turn up (and they will). It’s a fantastic start to the day.

Friendly Fires are back after a long break. A new album will also elevate them to an even higher status very soon. 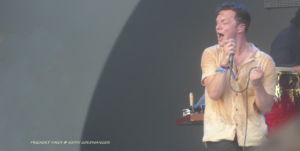 They perform in front of thousands today.

From the Camden Barfly to this in about ten years is a joy to witness. The sun is shining and we begin to wonder that maybe the reason Wham! became famous was because they were once as good as this. Ed Macfarlane – world’s number one pop star. Just as good as he was at Bestival a few years ago when he had the use of a catwalk that he managed to infiltrate during the songs and dance non-stop. That was during the middle of the night. This works at all times of the day.

It’s a glorious return. Love Like Waves is another song for this summer.

And we had confetti cannons.

Huge, as we say around here.

Django Django are simply Django Django, throwing out the rhythms, adding percussion as the songs reach a climactic ending and morphing each song into one another seamlessly. They perform recent tune, Surface to Air, a song that is just someone coughing that Rebecca from Slow Club dances around and sings along to. One feels we’ll be mental over these again this summer. This felt like a new beginning today as well. A band worth keeping up with in the hope that they will eventually do some gigs in the dark.

in the sun. He ends with I Love You, Honeybear. We’re in tears… we need Beck to snap us out of this.

Beck plays the hits, teases us with snippets of cover versions to keep us interested and times the ending just as Bjork arrives on the main stage to confuse the heck out of those intrigued enough to pay attention and ignore the huge electrical storm overhead.

Brilliant, is how some would describe this.

The opposite, is what others would have said.

A fully costumed Bjork, performing amongst the most expensive bits left over from the Chelsea Flower Show is singing songs from her latest album Utopia with the biggest collection of flutes ever seen in East London.

She divides the crowd today. This is a good thing. She’s loved by many and will never put a foot wrong for them but it’s questionable whether Victoria Park is the right place to be providing trippy visuals and operatic tunes that we could really do with having a big comfy chair underneath us to appreciate a bit more.

The line-up during the day made it one of the days to remember in this park and despite what the weather man said, we didn’t get a drop of rain all day.

A stroll in the park, home by midnight and the realisation that we need more visits to All Points East.