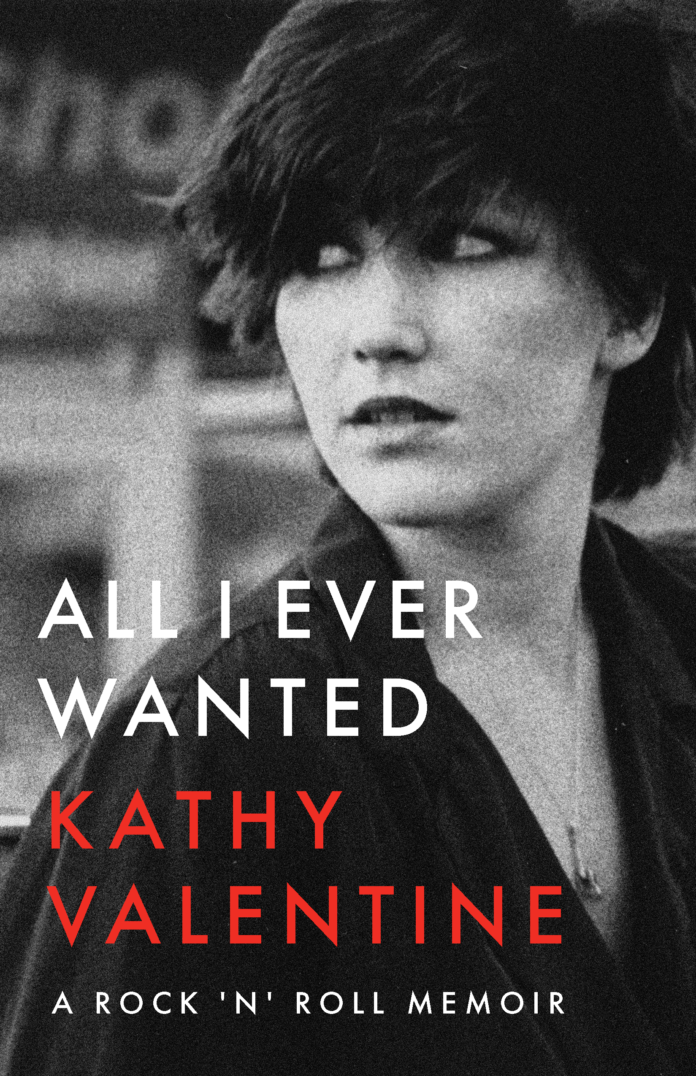 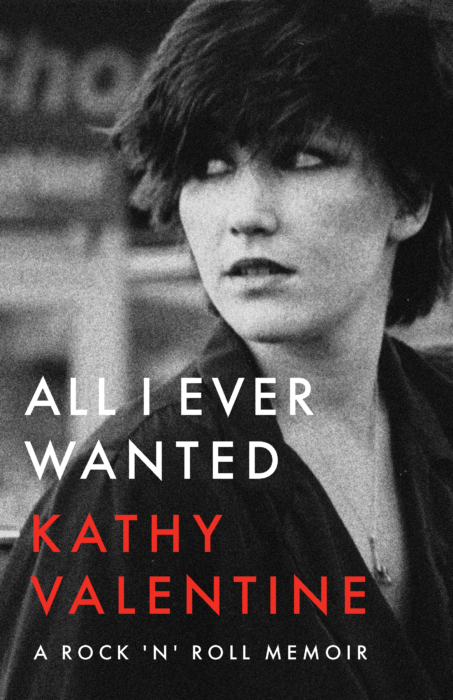 All I Ever Wanted: A Rock ’n’ Roll Memoir by Kathy Valentine

“I landed in the most successful all-female band in the world, making a record that became the first and only one written and performed by an all-female band to hit the top of the American charts. Ever.”

Kathy Valentine’s preface to her new memoir frames the narrative perfectly, a feminist rock ’n’ roll coming-of-age story for the decades. When it comes to women in music, the University of Texas Press has done it again! Whether you’re a fan of the Go-Go’s or a reader who wants to be enamored with a musician’s wordcraft, this is the book for you. Traversing the music scenes from Los Angeles to New York to London to Austin TX, the memoir maps the transatlantic rock, punk, and new wave scenes of the 1970s and 1980s, and Valentine’s experiences within them.

I’ll be up front in telling you that I love the Go-Go’s. I heard “Speeding” and “We Got the Beat” in Amy Heckerling’s glorious film Fast Times at Ridgemont High (1982) and was hooked. So I might be a little biased, but I think I’m spot-on when I tell you that Kathy Valentine’s writing style is out of this world. Her ability to craft buzzing metaphors and similes had me re-reading and gasping with delight.

On the very first page of the book, Valentine describes seeing the band X at the Whisky a Go Go, touring on their debut album Los Angeles. Describing their “romantic fury” on stage, Valentine writes that the band “played and sang like the devil was chasing them.” As a musician herself, Valentine describes how seeing X gave her “a surge of hope and possibility revving up like a motor going through a reverb plate.” And going backward in time but deeper into the memoir, Valentine details the first time she played a guitar: “[W]hile I strummed those songs, the diaphanous thread that tugs us down any given path fastened to me like a strand of spider’s silk. It would stay intact and attached forever, with music on the other end pulling me forward.”

Throughout the memoir, Suzi Quatro looms large as Valentine’s idol, and the woman who showed Valentine that she could be a rock star: “Seeing her doing what I had seen only men do changed everything. From that moment, I had one goal: to be in a kickass band with a gang of like-minded girls and claim the life I wanted for myself.” But Quatro isn’t just at the start of Valentine’s coming-of-age story. Descriptions are sprinkled throughout the memoir, reminding readers of the power a woman can have in the world of rock. Valentine describes the “foundation” of music as she came to know it, which was “built by the Stones and Hendrix, the Faces, the Who and the Beatles,” with “Bowie, T. Rex, Deep Purple, Cream, ZZ Top, and Led Zeppelin, like strata, add[ing] layers upon layers to the terrain.”

Then comes Suzi Quatro: “Suzi Quatro split that ground wide open. She was a fucking earthquake.”

Even when Valentine reflects on an ill-timed affair with music producer Mike Chapman, she doesn’t place the power in Chapman’s hands. Instead, it’s Suzi Quatro who makes her swoon. She explains how Chapman said to her: “You’re great . . . .  I’m going to produce you. You’ll be like Suzi.” A new paragraph registers Valentine’s candid ability to remain starstruck: “Suzi! As in Quatro. Well, now. My emotional range had no middle.”

The honesty with which Valentine writes is refreshing, making her the reliable narrator we all need. She provides the reader with details about her source material, from journal entries to band itineraries to calendars. Yet she reminds us that “memory is a slippery abstraction,” and “[i]t tends to take the shape of whoever is doing the remembering, so it’s entirely possible that another person at the same place and time might have a perspective different from my own.” Valentine also writes with candor and profound regret about a hazing incident caught on tape, the seeming banality of unwanted sexual advances that resonate so deeply, and the limits of rock ’n’ roll stardom.

On the most basic level, Valentine also has some great stories to tell. Like so many other musicians of the time, she saw the Sex Pistols play. Her first impression of Violators bandmate Jesse Sublett and Eddie Munoz is like something out of “Werewolves of London”—two guys with “perfect hair.” Sublett and Munoz would go on to form the Skunks, but in the meantime, they told Valentine “where to get a good haircut.” She saw Stevie Ray Vaughan and Doug Sahm’s bands play at the Rome Inn, a now-fabled music venue. When the Go-Go’s went to New York to record, Valentine borrowed the black Fender Precision John Ciambotti played on Elvis Costello’s album My Aim is True. The Go-Go’s played a show at Chino Prison, where Valentine and the rest of the band met Jimi Hendrix’s drummer Buddy Miles, or as Valentine describes him, “Buddy-fucking-Band-of-Gypsys-Electric-fucking-Flag Miles,” who ended up in prison on grand theft and drug charges. She shopped for punk clothes at Vivienne Westwood’s and Malcolm McLaren’s Seditionaries in London. She got her “favorite blessing in a telegram from the Ramones.” And, as if it couldn’t get any better, Valentine details how she cried in Johnny Cash’s greenroom while June Carter Cash, “ever a mother and a caring human, pulled me close and hugged me tightly while I sobbed my tale of woe.”

At its heart, the memoir is a powerful narrative about women who rock, resisting the standard tropes of the sexist music industry. Sure, Valentine describes romantic flings and great loves, but her language breaks down the boxes into which women musicians are often placed. In recalling how she met Jimmie Vaughan at the “brand new Antone’s, Austin’s ‘home of the blues,’” Valentine bucks expectations. Jimmie Vaughan, she explains, “became the object of my every desire,” but reader, it’s not what you think. She “had only one desire: to play in a band.”

She also criticizes the sexist ways in which the Go-Go’s were marketed: “Our popularity couldn’t be contained, but they could wrap us up in a lady-box. Thus, the Go-Go’s were anointed as America’s sweethearts. The girls next door. The most benign of all lady-boxes.” She goes on to tell her reader: “I hated the cutesy label. The Go-Go’s were as potent and lusty as men, and I’m not talking about sexuality. We came to every show ready to bury everyone there with a bash and crash attitude. Fans knew a different band than what the simplistic media described. We were smart, hip, and liberated.”

Finally, if you love the song “Vacation” as much as I do (or even a speck as much), you’ll enjoy reading about how Valentine wrote the lyrics after a trip home to Austin, played the song for the first time live at the gig recorded for the VHS Totally Go-Go’s, and found the single becoming the “first ever ‘cassingle’ issued as a format for the public.”

The only regret I have about the memoir is that Valentine didn’t include the written playlists she talks about creating as research for writing the book. Give the fans what they want!

I ordered a signed copy of the memoir from my favorite Austin TX record store, End of an Ear, which only seemed right given Valentine’s personal ties to the famed music city. With pandemic postal delays in the US, it took awhile to reach me, but it was worth the wait. They might have some of those signed copies available still if you’re quick.

And in case you needed another reason to read this memoir, just this month, The Go-Go’s documentary was finally released for fans of the band on Sky TV in the UK and Showtime in the US. Now that you can stream Alison Ellwood’s fabulous film that charts the band’s great success in the 1980s, Valentine’s book is the perfect complement.

You can buy the book from the University of Texas Press here.