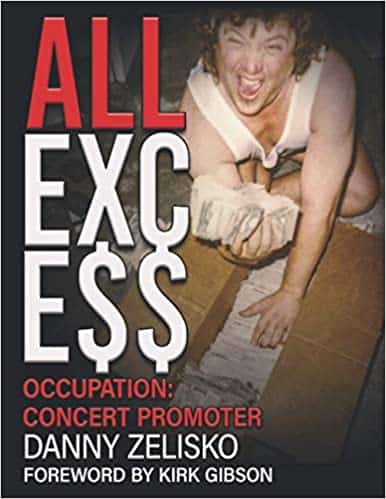 Danny Zelisko may not be a well-known name on this side of the Atlantic. To music lovers in the States, he and Evening Star Productions however will be synonymous with big rock shows in the same way that Harvey Goldsmith once was in Britain.

Weighing in at 350 pages, Zelisko’s autobiography is lavishly illustrated throughout with over 700 pictures from his personal collection. If the insightful, behind the scenes stories recounted in the book aren’t enough, the images capture candid moments that certainly bring them to life.

ALL EXCE$$ begins at the very beginning, rather than jumping straight into celebrity stories, which will no doubt be the draw to many. Zelisko provides insight into growing up in a Chicago suburb during the 50s and 60s. It’s an interesting read as he recounts his love of baseball as well as collecting trading cards and autographs whilst at the same time forming bonds with some of the biggest names of the day.

Although the first concert he promoted was in 1974 the journey really starts in 1976 when he began booking the intimate Dooley’s Nightclub in Tempe, near Phoenix. Over the years he hosted acts such as The Police; Talking Heads; KISS; Bon Jovi; No Doubt and Nirvana at the 750 capacity venue.

Spread over 60 chapters the tales don’t disappoint, it’s a who’s who of rock n’ roll royalty. During the 80′s and 90′s, Evening Star promoted shows in almost every state of the USA. The names just roll off the tongue… Zappa; James Brown; Queen; Whitney Houston; Stevie Wonder; Grateful Dead; Guns and Roses; Rolling Stones; Pink Floyd; Paul McCartney… and that’s only scratching the surface. The stories are being told here for the first time. They’re amusing, insightful and touching.

One of the most famous stories briefly touched on here, one which has become legend is of Van Halen famously demanded bowls of M&Ms with all the brown ones removed. “They did that to make sure the promoter actually read the rider,” Zelisko writes. “If there were brown M&Ms in the bowl, that meant the contract hadn’t been read and they would, at the very least, destroy the dressing room.” Lesser-known stories include Queen having a full-on food fight with $1000 worth of speciality cheeses and meats before going on stage in 1982 or Prince requesting $10000 of flowers, imported from Holland to fill his dressing room.

Zelisko’s story is interwoven throughout the celebrity shenanigans, following his journey from being a young hustler. It hits a high point when he finally gets to work with one of his own heroes, the legendary American Promoter Bill Graham. It’s easy to get lost in the famous names but at the centre of the story is a very personable individual who has built such strong relationships with the artists they have become an extended family to him.

2001 saw him along with a number of other major promotions, including Bill Graham Presents; Electric Factory; Pace Concerts selling up to ‘mega promotors’ SFX. Zelisko became President of the Southwest office. In 2006 SFX had become Clear Channel, who then spun their entertainment division, all its promoters and venues into what we now know as Live Nation. He remained as President and then Chairman of the Southwest region until 2011. Since then he’s returned to promoting in his own name.

ALL EXCE$$ is a great read for any music lover and a must-read for anyone interested in the backstage workings of the industry. For those of us that have experienced it first-hand, there are a few moments that make you wince or laugh in equal measure, however, we can only dream of what Danny Zelisko has experienced and seen through his eyes.