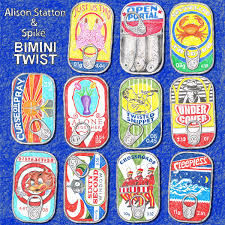 New album by the duo who were once bandmates in Weekend, with Alison Statton of course being the voice of the mighty Young Marble Giants….LTW’s Ian Canty needs a lie down after hearing her sing again…..

I know things differ with each individual’s perception, but all I can say is that Alison Statton’s voice used to be able to melt my heart from across the room and on listening to Bimini Twist it is still is the case. Of course she originally made her name with the Young Marble Giants, but apart from that has also released solid material with Weekend and also in tandem with both Ian Devine of Ludus and Spike (Mark Williams).

The latter was another denizen of that febrile Cardiff scene of the late 70s that produced the Giants themselves. In fact he played a crucial role in the fate of YMG, offering the band a slot on a compilation album he was organising in 1979 called Is The War Over? when they were on the point of breaking up. Without his encouragement, they may have split up long before delivering Colossal Youth for Rough Trade, one of the best albums I have ever heard. When that band did eventually fold in 1981 Alison started Weekend with Spike, an outfit that only lasted a short time but nearly broke through with their single for Rough Trade The View From Her Room. Ten years later she joined again with Spike as a duo which recorded 4 LPs in just over 4 years.

Now, over 20 years on from their last album together The Shady Tree, the pair are back. With such a long time between albums, one could speculate whether they could possibly match The Shady Tree, an excellent recording. But they’ve done far more than that, Bimini Twist is as near to perfect as I can imagine, feeling just right for listening to at this time of year as the nights draw in and Autumn supersedes Summertime. One perhaps for the long dark evenings, for quiet reflection and candid confessions by open firesides, but with a firm setting in red-hot tunes rather than mere Folky meandering.

There’s a lovely homemade feel to Bimini Twist, which is partly due to the fact most of it was recorded that way (much like The Shady Tree). This results in a warm and alluring atmosphere, accessible, but deeply personal and honest. It has the magical effect to make one feel like you’re the only person listening to it, being told the stories first hand from Alison herself. It all starts with a mix of slightly creepy and queasy fairground music and verdant strings with Alison’s crystal clear voice that is Just Us Two. It is an intriguing and alluring opening which sets us up nicely for the delights of the rest of this record.

Open Portal is more in a classic Pop Mode with a touches of the 60s, there’s a touching vulnerability to the vocal and the lyrics which talk about casting aside the past and how it’s never quite that straightforward. Undercover is in a similar style, a really jaunty and infectious pace meets a golden Pop tune, a story of daydreams and pretence. It’s another highlight on a LP chock-full of them. A hit if we lived in a sane world…

If we were looking for clues to Alison and Spike’s past as a part of Weekend, Curse Or Pray is an excellent torch song/Jazzy ballad that is just achingly beautiful. The sparse accompaniment is perfectly judged, it’s a joy to listen to. Alone Together is also slow, but a totally different feel, with a gently stepping melody, strings and vibes combining elegantly with that voice and the gently stated despair of the words are truly moving.

Distraction is a real Jazz Pop gem, seductively sung and concluding “Distraction is not the key”, with a faster coda of strings and beats leading us finally to an answer phone message that says “I love you”. A bit like a detective novel in a three minute song! I doubt if I will hear a much better song this year than Sixty Second Interval, a story of deception and lost love that has Alison “counting my blessings that I stepped away”. Like all great songs this totally draws you in and exists in its own time and world with its own logic.

By the time we reach the exquisite final track Sleepless, picked out around a sole guitar line, the intoxicating aura that is Bimini Twist totally entranced this listener. Spike’s way of never overdoing things, always finding the ideal arrangement and musical setting for each piece, plus Alison’s incredible ability to deliver a song in a way that makes it totally genuine, makes this album very special indeed.

Bimini Twist is kind of like a very attractive aural puzzle, where with repeated listening more insight emerges, slowly granting the attentive listener a fuller vista. But even on the first listen this album is quite wonderful with a breadth of vision rarely found in popular music. Truly a gently unfolding delight. If you’re openminded enough to listen, this record will stay with you a very long time indeed and you will be very grateful indeed that it does. If you think in such terms it could be “album of the year” but I prefer to think it exists in a class of its own. Both heart-breaking and life-affirming in a way so little music actually is, Bimini Twist is an absolute gem.