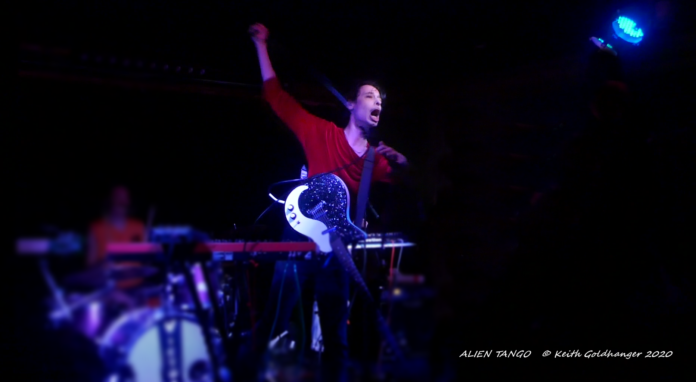 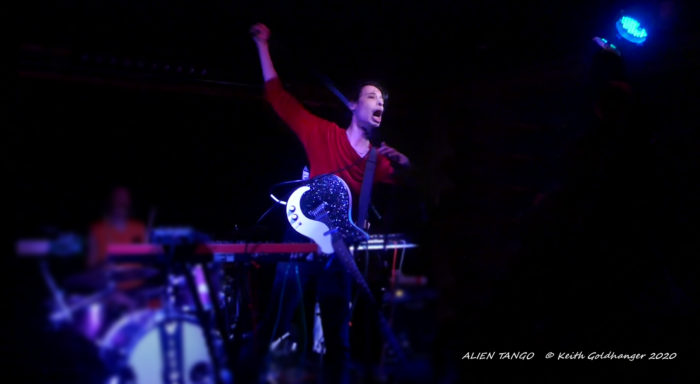 Alien Tango caught the attention of Keith Goldhanger at last years Sŵn festival in Cardiff. He’s now familiar with the tunes he heard that afternoon and went along for another look in East London.

Some people we often see standing on stages in this century are natural pop stars, a description directed towards those with flair and flamboyance, it can feel as though a human from another universe has infiltrated our lives and of course it helps to have a minimum of three or four great tunes to perform in front of us. They don’t all need thousands of fans (although it sometimes helps) and for those of us happy to proclaim anyone as a pop star we feel we need to use this term when describing people such as Alberto Garcia Roca, frontman of ALIEN TANGO who we’d like you to have a look at if being entertained by the wild and wacky is something you like to aim for when leaving the house in the evenings.

Alberto came to London from Murcia in Spain a few years ago and has been treading the floorboards inside European venues for a couple of years now and raised the eyebrows of the new music fans amongst us when we casually bumped into him and his three associates during last years Swn Festival in Cardiff. He epitomised the reasons why some of us jump from venue to venue for three days solid during events such as this and by the time we got home to hit the play buttons that are positioned on the screens of our laptops we knew this was an act we needed to see again (and again).

Friday nights in Dalston are odd affairs nowadays. The Victoria is filled with people who we believe know what they’re about to watch but probably wouldn’t be here if it was a Tuesday night.

The levels of chatter are high. Those responsible are also the same people screaming loudly in between songs (as long as they’re not still in full conversation) and to remind us it’s not a Saturday night, many people still have bags around their feet. A quick pint after work to watch a band we’ve all caught before and have been trawling through all the tunes and videos since the last meeting is what this is. Alien Tango probably deserve more and hopefully, they’ll eventually achieve more as we’re sure there’s many of you who may not have seen or heard this band yet and would appreciate spending at least half an hour in the same room or half an hour listening to the tunes available at the present time (see below).

The band are a five-piece tonight. It’s a crazy fucked up brilliant forty minutes that includes all the hits we’ve fallen in love with recently. They insert the foot-tapping disco-dancing Sexy Time halfway through to get anyone not shuffling their feet already now paying full attention. Alberto’s arm is by now at the same side of his head as the other arm, his legs have already been positioned at every angle anyone’s legs could be positioned at without falling over and the tunes we get are crazy and sweet with surprising twists and turns that are infectious and catchy without crossing the line into rubbish Rocky Horror type cabaret. His eyes will barely get a mention here, you need to see this performed for yourself.

It’s a bit silly but not stupid, we’re hearing The Rutles on acid, Flaming Lips gone twee, Sparks, Muse, Queen and we can see a figure in front of us that looks like a Stretch Armstrong version of Lias Saudi. It’s as though we’re watching a band that Freddie Mercury decided to form ten years before ever hearing any standard run of the mill rock music and as mentioned after first seeing these in Cardiff they’re the band The Darkness should have become instead of the bland conveyer belt (cock) rock outfit they became. Amazing Stories is an anthem that those familiar will want to sing along to, Honey is the perfect song to hear whilst hanging over your mates shoulders ten minutes before throwing up and of course, the already mentioned Sexy is the tune that stops you from chatting to your mates in order to begin to realise there are people in the room that want to hear the music as opposed to any of the drunken ramblings we’re subject to hearing from some people in the venue tonight.

It kind of works on a Friday night after the offices around the city have closed but ideally, Alien Tango are the band you need to witness by mistake after walking into tiny nooks and crannies at 4am during the big summer festivals. Or four O’clock in the afternoon if you just happen to stumble into them as we did in Wales last year.

Take your mates along and tell them that Alien Tango are the best Eurovision band that will never enter the Eurovision song contest and continue to listen to them whether you’re driving through the countryside or dancing around the room after half a bottle of vodka before the Uber arrives to take to something equally as thrilling.
Have a look as this lot, take my word for it, they’re bonkers.
Brilliant, synthy poptastic bonkers.

Here’s a playlist of their greatest hits :