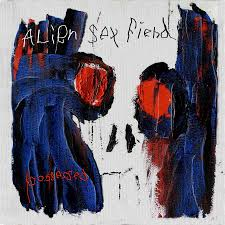 Brand new album by Alien Sex Fiend, a follow up to 2010’s Death Trip…..Ian Canty looks at another outfit that perhaps were “always different, always the same” too…….

I will admit I am a relative newcomer to Alien Sex Fiend, only really catching up with their activities when I reviewed the boxsets of their back catalogue (here and here). I don’t like to use glib phrases like “great British eccentrics” as that would imply some sort of wilful obscurism, which I don’t think is quite the case with Mr and Mrs Fiend. More the fact they arrived at their own design for living and have stuck with it despite prevailing trends, never deviating from the path that they made their own way back in the 80s. I suppose that finding happiness is about being true yourself and living thus gives individuality and originality a chance to prosper. There is not a band about like Alien Sex Fiend, sure some people have borrowed from them (as they did from their favourite acts initially, like most do), but that doesn’t make them the same.

What one must concede, even if the musical endeavours of ASF do nothing for you, is that there was not one hint of compromise in their approach. They never made their image or sound more palatable in the pursuit of commercial success, always remaining committed to what they are and what they do. Even with good bands there is an element of pretence about them sometimes, but by now it should be apparent that the Fiends are not pretending. When Alien Sex Fiend first emerged from the depths of the Batcave club in the early 1980s, few would have put money on them outlasting their peers and forging a musical legacy, which is neatly enhanced by this new LP Possessed. But it happened.

The recording of this album was completed under very troubled circumstances. Work was begun on what eventually became Possessed over six years ago, when it was envisaged as a quick follow up to the previous LP Death Trip. The death of long serving guitarist Simon “Doc” Milton in 2012 had a shattering effect on the band and with Nik Fiend involved in a nasty car accident and Mrs Fiend’s mother passing away too, everything else was understandably put on the back burner. Doc had left the band with a ton of ideas, so eventually Alien Sex Fiend decided to continue and finish the album he had played such a part in starting, both honouring his memory and reinvigorating the band in the process.

The most surprising thing about Possessed is how contemporary it sounds – electronica chill married to fast beats, soaring guitars and the unchanging element in Nik Fiend’s unique vocal stylings. Nothing to do with ASF following trends, more that the prevailing winds are currently blowing more towards their direction. They were making music that could be called industrial dance prior to the term being even thought up and splicing Punky guitars to synth drum rhythms long before it became a fashionable thing to do.

After a short blast of frosty electronica seasoned with guitar swoops and samples which is Possessed Intro, we’re into the LP proper. There is a trance feel to the longer tracks, like on Shit’s Coming Down and through much of the record a dance beat is present and powering things along. The negative angst of the chanted refrain of the aforementioned song is somehow subverted over the course of 11 minutes into more an incantation of resilience, turning into more a song of defiance than complaint. It’s In My Blood is another restating of ASF’s original vision for the modern era and Carcass’s buzz is a little like Suicide given a Gothic coating. Though up until this point it lyrically the themes seem to be about battling through the adversity they have faced over the past 6 years, the old Fiend humour is present in Ghost In The Machine, where Nik announces that “they call me the Pluto Kid” as they blast off towards a C&W-tinged spook-fest.

Wobbly sounds and cars braking heralds Amnesia, soon segueing into Spine-tingler, which has a little bit of an early Residents/Devo feel with “buried” vocal interjections. Alien Sex Fiend delve to the swampy Blues roots of Rock & Roll in Gotta Get Back, sleepy vocals and clear guitar lines set against a fast Electro rhythm and chirruping crickets. The following song Invisible is their most “Pop” moment here, a restrained backing track contrasting with the angst-ridden words, which convey the feeling of uselessness and loss that grief can have on one’s psyche. All that is left is Bloody Reprisal, which is a spacey take on It’s In My Blood and a very danceable remix of Shit’s Coming Down rounding off the album in some style. It is fitting this finale climaxes with some great guitar blasts – Doc would have no doubt approved.

It is great to see that ASF are back and having had to confront so many setbacks one cannot help but feel charitable towards them. But the proof is very much present on Possessed that they are a band reborn with a new sense of purpose, built on confronting the traumatic events that beset them and doing justice to Doc, whose ideas first ignited this LP. Anyone new to the band like I was a few years back need not fear – this is as accessible an entry into their work as any and is far more listenable and addictive than one might at first suppose. Possessed, borne out of the band’s struggles, is a fine record and shows the Fiends in very rude health indeed. In a recent interview Mrs Fiend stated “we don’t seem to fit into any kind of genre” and they don’t – they’re still just Alien Sex Fiend, doing it like only they can.