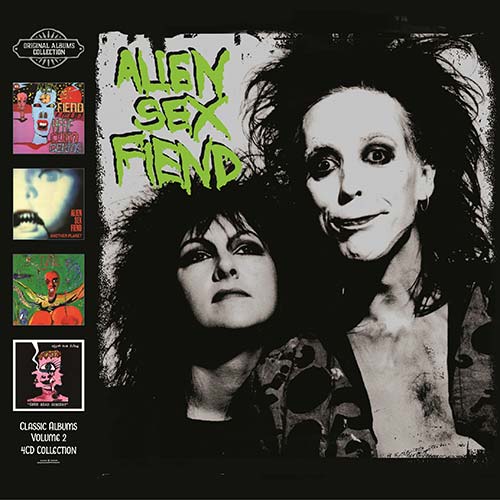 Now I’m by no means a Goth and was only vaguely aware of the career of Nik Wade aka Alien Sex Fiend, but on listening to this boxset I can only conclude that here was someone who lived entirely in their own world governed by their own rules and who am I to say that is wrong? In a strange way these records reminded me of watching “Michael Bentine’s Potty Time” as a youngster and getting drawn into the premise and logic even though it often made no sense whatsoever. As an outsider to the mindset of Alien Sex Fiend, I can but marvel at the machinations involved which seem to combine comic book horror, Cramps-esque single entendres, musing on insanity and UFO paranoia and that’s just to start with. By this time they were four LPs into their career and the die had been cast. Totally oblivious to the outside world, none of the ASF oeuvre would make any sense at all in sensible company, so you need to immerse yourself in the tawdry goings on to get anything out of it. Which I did…..

“Here Cum Germs” from 1988 was their last album as a band per se as afterwards guitarist Yaxi Highrizer (possibly a pseudonym) left Mr and Mrs Fiend to it, with a revolving door cast of support players filling in. Coming to this record as a beginner to ASF, I found this LP a barrel of fun, though I am bound to say that the bonus material included on this disc is what makes it. “Stuff The Turkey” is a great Xmas single, though quite how they thought this would follow in the footsteps of “I Wish It Could Be Christmas Every Day” is anyone’s guess! A cover of Red Crayola’s “Hurricane Fighter Plane” (plus dub version!) and the bizarre “Camel Camel” are the height of daftness too. Overall the sound here is like Sigue Sigue Sputnik accidentally reversing over Alice Cooper’s snakeskin boots, thin electro over thrashed guitar accompaniment with mind-bogglingly absurd lyrics, but in terms of novelty, all great fun.

“Another Planet” followed a year later – they kept up an admirable rate of creativity even if their outlook and sound barely changed over the timescale of this collection. By this time they were essentially down to a duo, but that didn’t pare down their sound to any real extent. Here though they slightly tweaked the formula so at times they resembled the Art Of Noise lost in a funfair hall of mirrors, as the influence of Dance Music made an impact on their traditional Goth guitar/electronic mayhem. Very much a 1980s product and boy when they discovered a plan, Alien Sex Fiend stuck to it like superglue! “Spot Your Lucky Warts” hints at early industrial dance music and “Sample My Sausage”(!) is a riffy guitar workout laid over electronics and samples. Also adding in a tad of Psychedelia to the mix this time round, which came to its inevitable conclusion with the cover of Hawkwind’s “Silver Machine”, a bonus track here. Quite often the relentless minimalist approach results in merely some bleeps, crashes and yelps as in “Instant Karm Sutra”, which does sound a little like “filler”, but I suppose they knew what they were doing, with the following track “Alien” being the kind of thing Suicide might turn out after Hammer Horror marathon and a course of electro-convulsive therapy.

By this time Alien Sex Fiend were far more successful outside of their home country with hard-core fans in the USA and Europe. One can only speculate the influence of the band’s image on the likes of Marilyn Manson for instance. Though the Goth scene itself was going through a lean period at home, the Paul and Linda McCartney of that genre ploughed on regardless with their new LP entitled “Curse”, which commenced with the ambitious, four-part, 10 minute plus “Katch 22”. By this time the band were becoming more firmly ensconced in the electro dance field with only really their bizarre image and lyrics setting them apart apart from the likes of Nitzer Ebb at times. “Now I’m Feeling Zombiefied” was the big track on this platter and you can bet that Kraftwerk never saw this one coming when they wrote “Autobahn”!

“Curse” though is a reasonably varied record which does get away from the template set out by the previous two albums a little, moving away from the cheap industrial dance beat to something a bit more off the wall (but we have to bear in mind it is ASF we are talking about here!). “Blessings Of The State” has an almost PIL element to it, in between the bleeps and crashes and the manic, fast paced “Eat, Eat, Eat,” gives way to the synth-Blues of “Aint Got The Time To Bleed”. Among the bonus tracks are “Mad Daddy Drives A UFO” a spacey reflection on Ivy and Lux’s DJ hero which brings home the Cramps influence on Mr and Mrs Fiend again and a mangled radio ad “Radio Jimi” sees Mr Hendrix distorted madly by the couple.

This collection concludes with 1992’s “Open Head Surgery”, which continues where “Another Planet” left off i.e. Suicide electro-clash jams with Nik Fiend’s eternal concerns of “Ooer Madam” rudeness mixed with B-Movie Sci-Fi journeys to a cartoon version of outer space. Sonic enhancements here include a bit of jazzy saxophone noodling on “Electric Banana Banana-moon” (with added Iggy crica “Raw Power” yelps) and the single “Magic”. There’s a slightly more “World Music” feel to some of the tracks here (though that is relatively speaking) and it does result in a laidback approach at times, though “Class Of 69” invokes the Stooges reinvented as a London boogie band. Most of the LP is more in a dance-oriented mode, the eponymous “Alien Sex Fiend” and “Coma” having much in common with the Shamen’s hit singles and are definitely more Balearic than Batcave!

Here’s where we leave the Fiends trip and for me it has been an unexpectedly diverting excursion. Though it would be difficult to wholeheartedly recommend this set to a mainstream music fan, being more for Goth collectors, staunch supporters and underground dabblers, Alien Sex Fiend’s stout refusal to take anything seriously set them apart from their Gothic brethren and the knockabout Herman Munster-gone-Punk-Disco antics made them a more palatable prospect for people outside of the scene than their more serious minded contemporaries. Loveable eccentrics rather than degenerate monsters, Alien Sex Fiend kept that never-changing image whilst subtly tweaking their sound until the hint of Goth remained only lyrically and thereby their extended outings filled the floor on many an industrial club night.