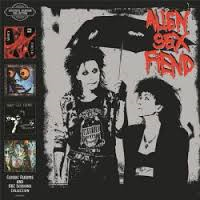 The first four albums by Alien Sex Fiend, along with bonus tracks including session recordings for the BBC. LTW sent their YTS Goth Ian Canty who tries in vain to earn his not-so-scaredy cat stripes

I was quite taken aback by the second Alien Sex Fiend collection that I reviewed here, but in a good way. I expected some messy, jokey sort of “I’m so scary” capering, but actually what I found was an artist committed to his muse and more often than not musically delivering too. So I was keen to find out a little more and delve right back to the roots of ASF, the results of which I present right here for your attention.

Prior to forming (or in the minds of most, becoming) Alien Sex Fiend, Nik Wade had been part of Illegal/Small Wonder recording band Demon Preacher. I mention this because track one, side one of the ASF debut LP “Who’s Been Sleeping In My Brain” is the song “Wish I Woz A Dog”, which originally was released by that band under the truncated name of the Demons in 1980. It has gone on to become an anthem of sorts for the band and the rest of the LP sets out their stall, brushing up their touchstones of Disco Punk, Post-Cramps Rockabilly and Glammy Alice Cooper/Screaming Lord Sutch-style theatrical horror weirdness until they were gleaming brightly. I suppose as Nik had been waiting since that first Demon Preachers single in 1978 to make an LP, he must have been champing at the bit and the result is there’s a freshness and energy here as well as a lot of good material.

The upshot was in a great LP featuring some of their best known tracks like “Ignore The Machine” (a big Independent Chart hit, when that meant something), “Lips Can’t Go” and “New Christian Music”. It works as a snapshot of the early days of the band and also a highly enjoyable grab-bag of some of their best stuff. This was around the time when Goth first came to the public eye through the Batcave nightclub scene and ASF were briefly fashionable as a result. Others fell by the wayside, but the Fiend obviously had more in the terms of staying power and a dogged (hee hee!) insistence on their right to be heard. “WBSIMB” deserves its place among the Goth Rock elite and it is rounded off nicely here with some remixes and a standard bearer of theirs in “R.I.P”.

By second album “Acid Bath” the basic templates that the band would forever toy with had been set, but Alien Sex Fiend pushed and played around those boundaries all the time, even if no-one outside of their Goth-diehard fanbase noticed much. Goth’s brief time “in the sun” (not a really appropriate term given the genre, I’ll admit) was over and of course the Music Press had moved onto the next thing. As ASF had missed out on a major label contract unlike the Cult and Sisters Of Mercy, they had a little extra freedom and “Acid Bath”, though sometimes invoking the benchmarks of Gothic Rock, does contain quite a few quirks of its own.

Perhaps the horror fixation took over a little at this point, bearing in mind some of the song titles like “Dead And Re-Buried” (which sounds a bit like Suicide with its fast paced sequenced electronics and echo vocals) and “Smoke My Bones”. However “In God We Trust” is confusingly a fine creepy bit of Electropop, successfully kicking into touch all the knowledge we gained on the debut LP. “She’s A Killer” slows things down being a tense Gothic melodrama enlivened by Nik’s Cockney twang, maybe a little too “plastic vampire fangs” this time though!

Things get back on track with “Breakdown And Cry” in which Nik opines that he’s a “dinosaur of the working class”, though the Fiend were Goths they always seemed to take things lightly and with a sense of humour which I think endears them to non-Goths like myself. They also manage to crank out another enduring song of theirs “E.S.T. (Trip To The Moon)” before it all ends on “Attack!!!!2”, the original version being one of the bonus tracks on this disc. Also, another of the extras on this one is a standout Psycho/Rockabilly assault “Boneshaker Baby”, possibly the pinnacle of their Cramps-obsessions and one of the last for a good while too as things were to change markedly on the next platter.

1985 arrived and so did “Maximum Security”. Coming in a less colourful sleeve ASF seemed to be launching themselves more towards the electronic and dance beat orientated side of their sonic outlook. This is made clear by title track, which sounds a little like PIL circa “This Is What You Want”, all upfront drums battling it out with screeching guitars and Nik’s lucid vocal interjections flitting in and out. The electro rhythms dominate here and gives the lie to any presumed wisdom that Alien Sex Fiend were some kind of standard Goth Guitar outfit. The sparse arrangements do take a little of the pace and madness out of the mix, but it would take a hard-hearted soul to censure the band for trying something a little different (even if it was a natural extension of their more dance-minded experiments of the previous two albums).

“Fly In The Ointment” stands out being a more of a churning, mid-paced Stooges sort of groove and the relaxed “Seconds To Nowhere” is chill-out music before that was even a thing, but don’t expect Alien Sex Fiend to get a gold star for innovation! Though there was this shift in sound the usual ASF lyrical preoccupations remained – the weird, the unsettling and the outer reaches of the mind, all subjected to a typically tongue in cheek examination. “Depravity Lane” brings it all home with another fun filled Public Image-type rant. Though probably not my favourite of the four LPs presented here, “Maximum Security” certainly works as an antidote to the presumed set nature of Goth image and sound. This disc is rounded off by a different mix of “Ignore The Machine” and a John Peel session from 1984. ASF sound full of fire on this BBC session, it is a little gem (with “Hee-Haw” in this version agreeably owing a bit to the early Banshees) and a worthwhile bonus.

For the final album in this selection “It The Album” ASF courted controversy (and not for the first time!) with the rollicking “Smells Like….” single but for the LP itself they favoured long Electro jams like the epic, quarter of an hour in duration, “Manic Depression”. If the relentless approach of “Smells Like…” seems like an 80s update of classic Hawkwind, “Believe It Nor Not” has more in common with “Warm Leatherette” and John Carpenter than Fields Of Nephilim. “April Showers” ploughs the same furrow before seguing into a throwback to their manic Rockabilly moments on the exciting “Wop Bop”.

Much of the record is dominated by long instrumental passages, quite unlike what had gone before, it kind of makes me think a little of “Neu!75” with its occasional bursts of energy interrupting the long reflective moments. “Get Into It” even goes a bit Ian Dury on us, this record is truly insane! “Do It Right” another rocker brings things almost to a close bar the brief “To Be Continued”. The bonus tracks on this one include the oddball “Buggin’ Me”, the more restrained “Here She Comes” and a couple of tracks from a later 1984 Peel session.

Overall this boxset, like the previous one, is great fun again and a good selection of entertaining noise. I’ve come out of this with a total respect for the Fiends who have always stayed true to their vision despite the derisive noises that often were sent their way by the Music Press. The Alien Sex Fiend trip was still on-going in full force at this point in time and we must bear in mind that all these albums and singles did pretty well in terms of sales, regularly popping up in the higher reaches of the Independent Charts. Although I’ll concede that the band were not in the class of the Cramps or the Ramones, like those bands they filled their music with references to their influences and obsessions and sent out a startling image/individuality which made you certain that you were not listening to or looking at anyone else. In these days of stifling conformity it is strangely refreshing and makes one wonder, of how many others can you truthfully say the same?