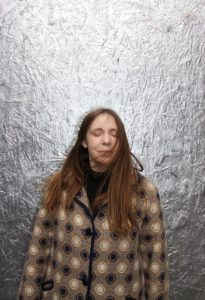 Goddess is the debut single from Alice Hubble and is taken from Alice’s forthcoming album ‘Polarlichter’ which was recorded at her home in North London using her vast array of analogue synthesisers. The solo project of Alice Hubley (Mass Datura, Cosines, Arthur and Martha), Goddess is essentially an EP backed by ‘Lake Louise’ and three ‘Goddess’ remixes.

The recordings were completed and mixed at Big Jelly Studios in Ramsgate (whose clients include Metronomy, Stealing Sheep, Girl Ray) and was co- produced by Mikey Collins (Allo Darlin). Having recently supported Damo Suzuki and Darren Hayman, Alice will be playing a number of shows in support of its release.

An unabashed paean to the beauty found in analogue synthesisers, ‘Goddess’ is a gorgeous track filled with heartbreaking chord progressions that strangely reminds me of Joy Division’s ‘Atmosphere’. It’s almost as if Alice has re-imagined the devastating denouement of ‘Atmosphere’ and changed its outcome. What you can’t escape from is the delicious throbbing electronica and the 80’s feel to this track. It could have been produced by Giorgio Moroder. Alice says of the song, “Goddess is a song about the male gaze; about a man idolising a woman to the point that he doesn’t see her as a person. His ‘love’ is all consuming and the focus of his affection is seen merely as an object. As a result he consumes her and takes from her until she has little left, but thankfully she finds the inner strength to walk away.”

The track’s lush tones and pulsing beats haven’t gone unnoticed with significant BBC 6 Music radio play from both Gideon Coe and Steve Lamacq who made ‘Goddess’ his ‘track of the week’ and said that ‘Goddess was “Tender and insightful and awash with old school synths and a beautiful voice”.

On top of all this, the track comes with a rather lovely lo-fi video directed by Happy Robots Records label boss Adam Cresswell.

Get plugged into Alice Hubble and get lost in the rich 80s analogue synth sounds now!