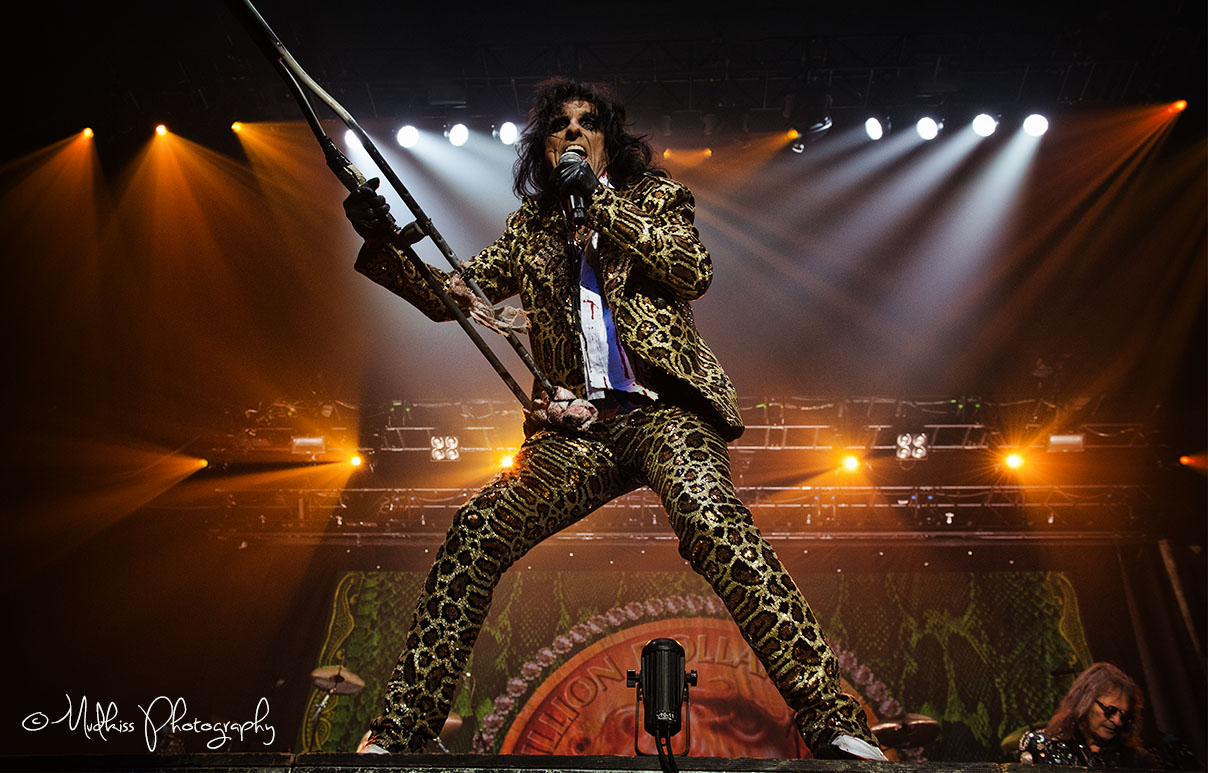 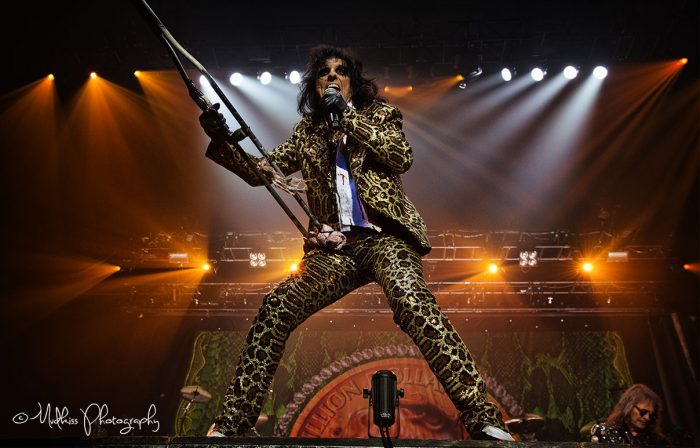 Alice Cooper reunited his original band, ‘The OGs’ as he called them for a sold-out show at Manchester’s arena. Nigel Carr reports back for Louder Than War with photos by Melanie Smith.

It’s not often you get to review one of your boyhood heroes. It made last night’s show at the arena something truly special. As an 11-year-old on holiday in Spain, the first album I ever bought was by Alice Cooper. It was red with a snake on the front and the tracks on the back were listed in Spanish – Asesino – Killer.

I loved it to death, playing it over and over to the final, title track to which in tonight’s stunning performance, Alice, the man, had his head guillotined off. It was part of an incredible evening of entertainment by the almost septuagenarian showman.

The Tubes had played earlier followed by The Mission, the main support act. Gone were the 80’s flowing locks of Wayne Hussey, (he used to remind me of Danny, the drug dealer from Withnail & I) replaced by a shaggy grey crop cut which, combined with his sharp grey suit and pink shirt reminded me of a trendy Geography teacher. It was an uphill struggle for the band, trying their best to liven up a crowd who were completely indifferent to the performance, apart from three uber-fans to my left who were dancing wildly to every track, and calling out something incomprehensible to Hussey. The ‘Mission contingent’, unfortunately were the only ones in the entire arena doing so!

They banged out all their biggest tracks, Neil Young’s Like a Hurricane, followed by the mighty Severina and still, the crowd remained motionless. The frontman attempted some engagement, but after dissing the Manchester weather, followed by an attempt to converse with the crowd on football, revealing his love for Liverpool, the final nail was firmly in the coffin.

Final track Deliverance allowed Hussey to put his guitar down and make one last effort to engage with the crowd, which did at least lead to a ripple of hand clapping, but that was it. They were here to see Alice Cooper and no attempts from the singer were going to make a blind bit of difference! 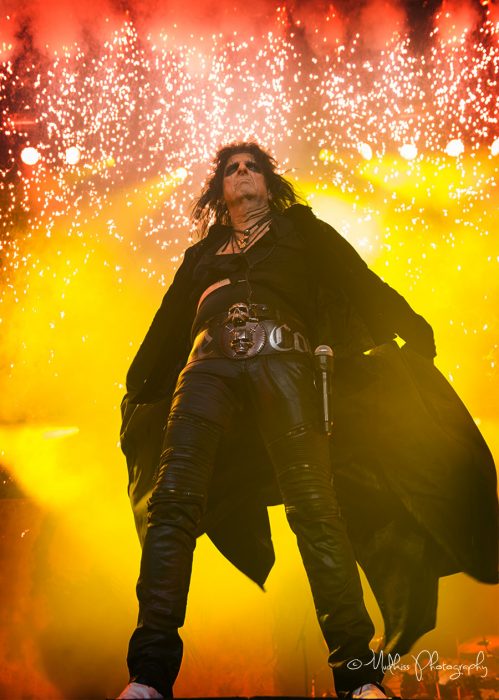 After a short intro the curtain dropped revealing Cooper and his band, including four guitarists! on stage and the crowd were instantly on their feet. Hunched in black Nosferatu cape, he threw it off to reveal his slim figure sporting skinny leather jeans and black military jacket. The band segued in to Brutal Planet like a sonic aural attack and we were off!

Relying on his huge back catalogue they stormed through hit after hit culminating mid set with a  jaw dropping Halo of Flies, the centrepiece to the aforementioned Killer. In black top hat and tuxedo Cooper conducted the guitar heavy opening with his white baton, bringing the musicians in one by one. Eight minutes of pure 70s rock ensued, including a storming bass and drum solo, crashing to an anthemic close with a battery of crunching guitars.

There was no let up with tracks cherry picked from the band’s 50 year career. Stand out Poison was preceded by a stunning five-minute guitar solo from Nita Strauss, hair flicks and all! In a nod to Jimi Hendrix’s ’67 Monterey performance, she knelt front of stage, fireworks exploding either side. A prodigious talent, whose fluidity and ability to ring the strangest of notes from her guitar was truly unbelievable. 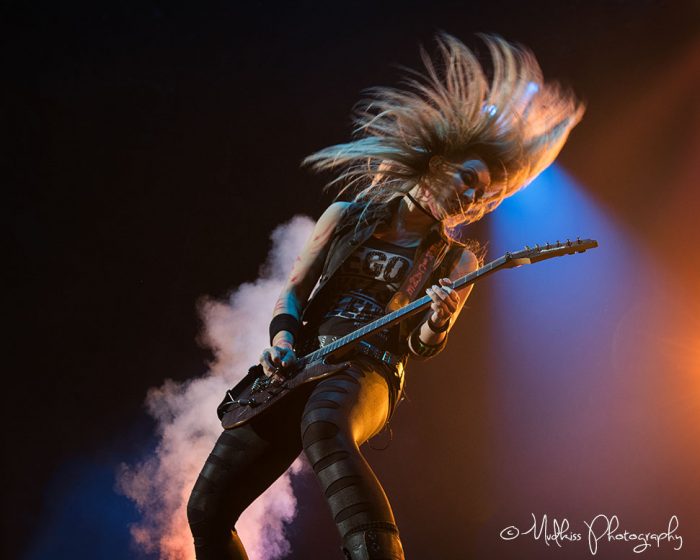 The first part of the show ended with the beheading scene to a backdrop of the funereal Killer melting into I Love The Dead, the closing track from the Billion Dollar Babies album.

Then the fun really started! The current Alice Cooper band was replaced by the Original Gang, The OGs. They have been performing intermittently throughout the world tour. All around seventy years old, Neil Smith on drums, Dennis Dunaway on bass and Michael Bruce on guitar with Alice at the helm stormed through some true classics for the five song encore.

They opened with Eighteen from the Love it To Death album, (and sung by a young John Lydon when he auditioned for the Sex Pistols at McClaren’s King’s Rd shop in 1976!).

Billion Dollar Babies, No More Mr Nice Guy and Muscle of Love were topped by School’s Out which segued in and out of Pink Floyd’s Another Brick in The Wall (a subtle lighting change saw the whole stage soaked in pink light!) A full on party ensued with huge bouncing balloons launched from the stage, Alice, Samurai sword in hand, popped any that came too close launching explosions of confetti over the ecstatic crowd.

It’s impossible to knock the performance of one of the true masters of rock, a great, great showman. Some tracks were missing like Elected, Stephen and Hello Hooray, but you have to take your (top) hat off to a man who can fill the Arena to capacity with such a knockout show.

I know we can’t expect our boyhood heroes to play forever but for one night only, and it may never happen again, I felt truly privileged to watch this old pro in action!