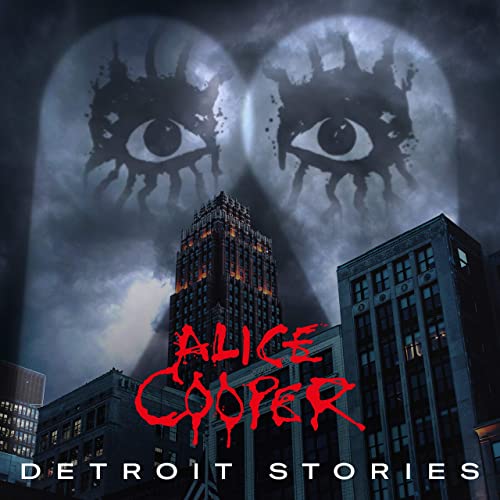 The veteran shock-rocker born Vincent Furnier returns to his roots with a boisterous celebration of the Motor City’s storied hard-rock scene of the ’60s and ’70s.

Who would have thought that three of the most life-affirming albums released during the Covid-19 pandemic would be by septuagenarian, old-school rockers? Following hot on the heels of Blue Oyster Cult’s ferocious comeback The Symbol Remains and AC/DC’s Lazarus-like return on Power Up, Alice Cooper has followed up his 2019 back-to-the-source Breadcrumbs EP with a full-length album that pays homage to Detroit’s original high-energy rock & roll scene which gave the world The Stooges, The MC5, Mitch Ryder and The Detroit Wheels, The Rationals, Bob Seger and of course, the Alice Cooper group.

Detroit Stories includes cover versions of key songs from the Detroit rock scene’s glory days, mixed with a glut of new songs that bristle with the raw pre-punk energy of the MC5 circa Back in the USA and High Time, the politically-charged group’s second and third albums respectively. The album also features a number of Detroit/Michigan luminaries, including Wayne Kramer of the MC5 and Mark Farner of the influential Flint, Michigan group Grand Funk Railroad, along with the surviving members of the original Alice Cooper group and blues-rock virtuoso Joe Bonamassa.

The frenetic blue-eyed soul of Mitch Ryder and the Detroit Wheels lit the blue touch-paper for a whole generation of Detroit and Michigan rock groups, so it’s fitting that Cooper should kick off Detroit Stories with a tip of the hat to Ryder, a cover of the Velvet Underground’s Rock & Roll that’s very faithful to the style of Ryder’s own cover of the song by his post-Detroit Wheels group, simply named Detroit. The similarity is perhaps not surprising, given the  presence of the group’s guitarist Steve Hunter and drummer, Detroit legend Johnny ‘Bee’ Badanjek, on the track.

Next up is the punky rock & roll of Go Man Go, one of the standout tracks on an album that maintains a high quality across the majority of its 15 tracks. Go Man Go is the first of several high-octane garage rock tracks that characterise this energised album, including Social Debris, Hail Mary, Independence Dave and an ebullient cover of the MC5’s Sister Ann.  There’s plenty of variety on offer too, with the twisted pop of Our Love Will Change the World, the soulful strut of $1,000 High Heel Shoes and the bluesy swagger of Drunk and in Love.

Given the excesses of Cooper’s lifestyle in the ’70s and early ’80s, it’s astonishing to find that his singing voice has barely changed, remaining a fiery cocktail of louche Jim Morrison croon, feral Iggy Pop snarl and gleeful Frank Zappa leer, perfectly adept at delivering the various shades of garage rock, soul and blues on Detroit Stories with aplomb.

It’s no surprise that original Alice Cooper producer Bob Ezrin is back at the helm for this, Cooper’s 21st solo album. Unsurprisingly, Ezrin steers an assured path through the varied musical currents of Detroit Stories, resulting in a lengthy album that nevertheless hangs together as a cohesive whole.

Cooper’s final Detroit story is simultaneously a salute to another Mid-West musical hero and a nod to Furnier’s own roots in East Detroit – a blazing cover of East Side Story, originally a hit for Bob Seger and The Last Heard in 1966. Essentially a revved-up rewrite of Them’s Gloria, East Side Story’s original lyrics are expanded by Cooper as this natural-born entertainer leaves us with one final tale of life in the Motor City. After a thoroughly miserable, locked-down year for many of us, the unabashed joi de vivre that 73 year-old Cooper brings to these songs is impossible to resist.

All words by Gus Ironside, 2021 More writing by Gus can be found here.