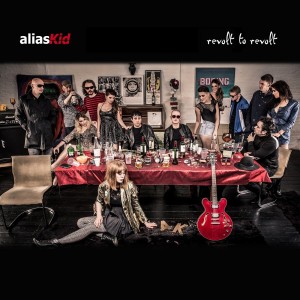 “Alias Kid are artful hooligans, they are the workers grabbing the means of production and they are a great rock n roll band – a band that is for the people and of the

So the artful hooligans have finally made an album.

Now that music has become a rich kid’s hobby horse, a year off from the Uni playground of pottering genius and part time doodles – albeit some very good good doodling which I love as much as any music writer – it seems astonishing that when the Bash Street Kids turn up they seem so out of place, so unusual as they blink in the rarified atmosphere of this privileged new world.

Alias Kid are the latest in that grand tradition – the lads band. It used to be the production line that created the backbone of British music. The hallowed greats taking their one chance, whether it as boxing, football or rock n roll, to make something of themselves before the nine to five sucked them back in again.

These days there is not even a nine to five.

Alias Kid have all the right stuff in place – they are from Manchester, Alan McGee is involved, they live the life, they talk the talk and whilst no-one was really watching they boisterously put together an album of melody laced street classics with that right balance between swagger and romance, that great old trick of talking dirty and singing sweetly. These melodies are in their DNA and turned songs into songs that drip with the intent and meaning of a band who need to have it. These are songs that drip with the passion of a music that is made because your life actually depends on it, music that captures the exuberance of a Saturday night and the comedown of a Sunday morning, music that is like the first time on drugs and the first time off drugs, music that captures dreams with a  snotty nosed street poetry and terrace bonhomie with a command of the classic chords shuffled around once again for great effect and produced with banks of warmth and a very big sound by Paul Quinn.

Of course the Gallaghers leave their imprint on here, the much maligned Oasis are still very much the heartbeat of much British rock n roll. Outside the narrative the Manchurian giants are the folk music of these times. Alias Kid have the rasping bonhomie of Liam and the surefire melodic touch and embracing communal edge of his older brother but with an added electronic edge and Primal Scream twist and a touch of Spectorish Ramones guitar pop classic.

The anthemic ‘Revolution Sometime’ is their rabble rousing manifesto – a 33rpm revolution of defiant good times before the slave masters put you in your place – the only revolution that means anything in rock n roll.

This is a music of warmth and good times and party while you can before the shithouse comes down. Whether anyone can afford to join the party or will even be allowed to know the party is on is a different matter but this matters little to Alias Kid  as they are having the time of their lives whilst soundtracking it imperiously.