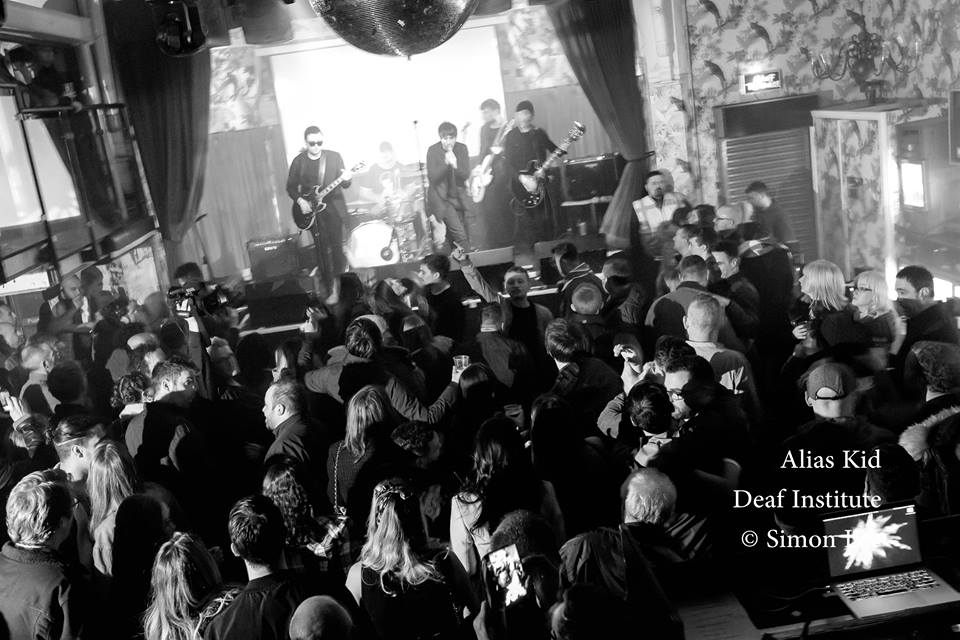 When your mate asks, ‘Do you want to along to watch a gig?’ and you have nothing on that night, what are you supposed to say?

‘Thanks mate but its Saturday night and its Celebrity Pie throwing and I believe Paul is going to get kicked out this evening’….. ‘Of course I’ll go to the gig. Who is it?’

I had the pleasure of being invited to watch Alias Kid. My head started running through the encyclopaedia of music that had been collected over the years. The name was frustrating me so I had to turn to the World Wide Web. That was it.  Sergio Kun Aguero (Scorin’ All Over The World). Being a blue myself I had heard the song many a time and had the pleasure of seeing them perform pre match in City Square a while back. With a quick recap of some of the tunes, it was off to the venue for the gig.

Walking up the stairs of the Deaf Institute  with a quick look at the timings, Alias Kid was due on 8:15pm – but more about them soon.

Suave Martyrs, four young lads took to the stage and before you realised, had broken  into a jamming instrumental. Some funky bass, foot tapping beats and fancy licks, I was unsure if this was part of the act or just a bit of fine-tuning. 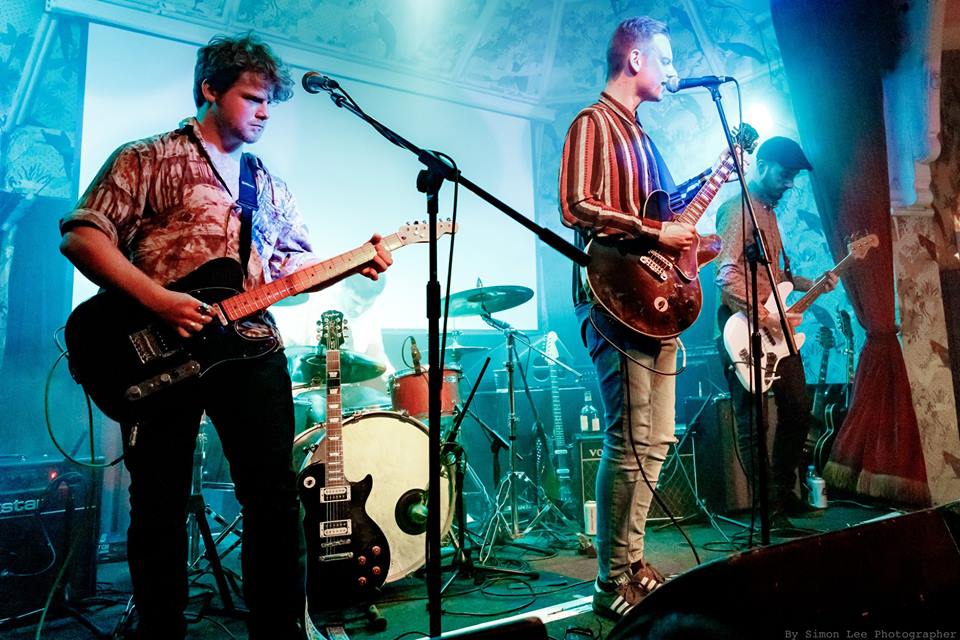 The tall, skinny lad who appeared to be the front man of the band, walked around the stage without a care in the world, putting down some paper cups and holding a large bottle in his hand with only half the bottle full. “We got seven cups here and half a bottle of whisky. The first seven people that come to the front can share this with me.” Straight away, some cocky punter was pushing people out of the way to claim his prize. It takes one to start a revolution and six more lucky fans to make a party. All this was happening whilst the other three members of the band carried on playing their garage jam. The charity giver, once out of his goods, picked up his guitar “We are the Suave Martyrs, I hope you enjoy the show!”

Although only young and at the start of their music career, what broke out was a very mature sound. It was a mix of some old psychedelic licks with a Manchester noughties twist. Their new seven whisky breath fans and a new fan base quickly built up within the crowd as they continued to blast out some great tunes. With the singer changing between songs from one guitarist to the other, it showed that these lads have a fair bit in their locker.

Proud to show off their new single Man About Town the crowd was getting larger for the main act but you could see the punters just taking a moment to take in this new act. As the time passed quickly, it was apparent that Alias Kid had filled the room with members of their family, friends and die hard following. People greeted each other with great fondness as though they may have not seen each other for a few years, but that was what this was about a band reforming, not vanishing and giving it another try.

The town crier entered the stage and waved his bell before he placed it to his lips and informed us all with a bellowing voice through the sound system: “it may have been two and half years, but the kid is back. SO MAKE SOME NOISE. ALIAS KID!” 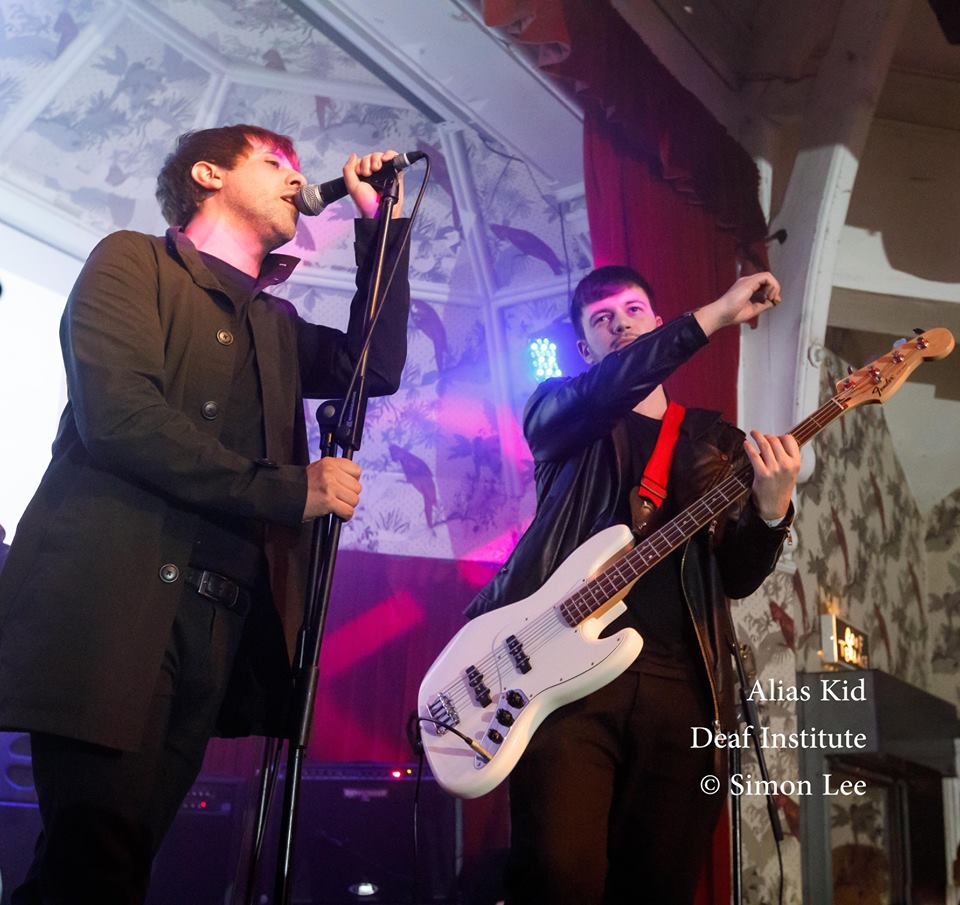 The band took the stage and Maz with an air of trepidation in his voice (which was to be expected) introduced the band name and off we went. Never Negotiate got us all going, hands raised as they sang along, followed up with Dirty Soul and by the chorus the band and the crowd had settled in for the ride. Treating the audience to plenty of new material throughout the night, Bought Or Sold, and Beat Up Your Soul were introduced to the crowd. Gonna be a Star had  some great harmonies and the potential to be a real anthem for the band, the whole place was alive. The new single Inglorious followed and that encouraged the singers amongst us to show off to the band that they had done their homework.

When the band started a song and saw  Maz disappearing from the stage – “Get back up here you got a job to do. Stop signing autographs” – and  more banter between Sean and the band about his dressing habits in his own home. All this added to the great interaction that the band have with their fans before running through  some old tracks –  Messiah, Oxygen, Shot Through with some classic punk choruses mixed in while  Anarchy In Salford saw  Colin beating away like he was a kid showing off to his parents.

The whole night was wrapped up with thanks and requests to look out for the new material coming our way before finishing with Revolution Sometime which now means more to the state of the world than when the song was originally recorded a few years back.

Alias Kid’s performance after some time out of the limelight was the same as the set itself. The band started off a little nervously but soon had picked up where they left off. Pride in the old tracks and the new mixed with the heavy Manchester sound promised that they will be filling larger venues soon. It would be a crime in itself for Alias Kid not to showcase the many anthems that need to be played in front of many and not the few.