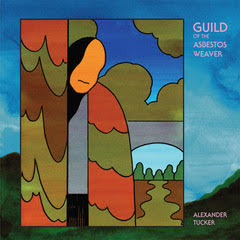 Guild of the Asbestos Weaver is an outside realm. A dimension of cross-cultural musical reference points created by an artist pushing in every direction. Alexander Tucker writes his own worlds and invents languages that only those who listen and are open to his persuasion will fully understand. If all of that sounds overboard then look at it this way, Tucker has made an album that can with ease rub shoulders with your No-Wave titles as it does your classic avant-pop. Guild of the Asbestos Weaver hooks you in from its very first note and keeps its grip on you until it finally ends. Pigeonholed it will not be.

The multifaceted nature of the album is evident from opener Energy Alphas which slinks in on a 70’s disco drum machine pattern before it bursts its banks with a massive surge of instrumentation and grand ideas. Over multitracked and echoing vocals Tucker spins a tale that is hard to grasp which makes for such a rewarding listen as you are forced to work to get any kind of understanding about what Tucker is telling us. This means repeated listens are essential and there are a lot of areas where your own dreams and inner thoughts create a meaning from the lyrics. Universal pop made with an avant-garde outlook. Big ideas, big sound and a very big opener.

Artificial Origin follows and it is here where we feel the rush of influences flowing through Tucker. Here is a song that only a very clever songwriter could have created as it manages to sound like so many other artists all at once yet it retains its originality. It is another bold song that is a monolith in so many ways yet it keeps the intimate nuances that make it rise above much of what else is out there at the moment. In a way Artificial Origin invokes a sense of melancholy at how the current music scene celebrates the streaming culture as you could imagine this song arriving in edited form on Top Of The Pops in the 1980’s when it seemed easier for outsiders to break in to the hallowed halls of the top ten….right next to your Tears For Fears and your Kate Bush’s.

Montag shifts gears on us slightly and it is the first time that a sense of darkness creeps in with its slithering main rhythm proving to be an incessant earworm as Tucker evokes a mantra that repeats over and over with varying degrees of distortion and overlap. Montag is as disorientating as a magi overdose where you think they’re not working so you take more and then…..

Penultimate track Precog is probably the most conventional album here and the word conventional is used very loosely as it a song that still retains that experimental energy yet this time the big slabs of sound are slightly dialed back for a rhythm carved out of stone shimmies its way forward and then we are transported once again to a world that is new, strange and exotic. Precog feels like the moment you step off a plane in a foreign country where smells and sounds are new and you simply cannot wait to get stuck in to what the place has on offer. You get a sense that your Bowie’s and your Eno’s would greatly admire this song as it shares that so-called Berlin period’s goal of creating a new music forged from the embers of austere Europe and America’s very own rhythm and blues.

The old adage of go big or go home applies to closing track Cryonic which brings sharp focus onto Alexander Tucker’s gift with song structure and dynamics. As the song slowly starts to solidify and come into focus you hear Tucker’s vocals once again acting like a meditation guide as his mantra rolls around and around. Cryonic is relentless and utterly spellbinding with the magic of Tucker’s voice truly exposed.

Guild of the Asbestos Weaver is an album that feels like a lucid dream. Even at its most dense and sonically grand it remains elusive and slight. Alexander Tucker has managed to meld cosmic ideas to more grounded sensibilities. Throughout its running time you are constantly being surprised by another small detail being added and it is these small details that truly make this an album worthy of your time. A trip for the senses, Guild of the Asbestos Weaver is warm, inviting and often strange and it should be heard by as many people as possible. Go buy!