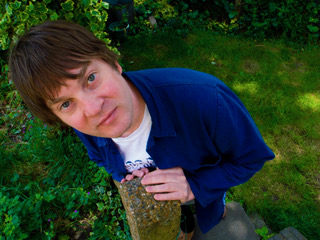 Alexander Tucker has announced his seventh solo album release, Don’t Look Away, out on 24 August 2018 on Thrill Jockey Records.

Don’t Look Away is Tucker’s first solo release since 2012’s Third Mouth – described by MOJO as “Simultaneously beautiful and uncanny” and by The Quietus as “a magic spell” – and on it, he contrasts traditional song structure with experimental collage and rich orchestral arrangements. Viewing Don’t Look Away as the final part of a trilogy, alongside Dorwytch (2011) and Third Mouth (2012), Tucker explains, “the composition across these three albums feels like a move away from my earlier records towards something clearer and traditional but still maintaining my love of manipulating source material into new shapes and forms.”

There is a distinct otherworldliness to Alexander Tucker’s art, it’s the subtle thread connecting every aspect of his output, from the vibrant and hypnotic avant-pop of Grumbling Fur, his duo with Daniel O’Sullivan, to recent extended drone collaborations with Charlemagne Palestine and Grumbling Fur Time Machine Orchestra, to his beautiful yet strangely unnerving paintings and comics.

With guest appearances from Nik Void (Carter Tutti Void, Factory Floor) on vocals and Daniel O’Sullivan on viola, Don’t Look Away was recorded over an extended period in London and Zürich. The album was mixed in Daniel O’Sullivan’s Dream Lion Studio, and came together while Tucker was in Switzerland composing for the Schauspielhaus Zürich, and establishing UNDIMENSIONED, his own independent publishing imprint. As a result, Tucker’s wider work feels more present here than on previous recordings and this shows itself often in the lyrics, which range from relationships, including the uncomfortable ones we often have with ourselves, to sci-fi imagery and cosmic horror. 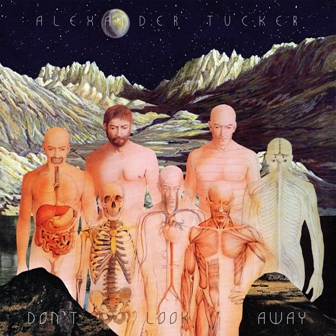 The musical landscape of Don’t Look Away is illustrated on the cover’s hand cut collage, created by Alexander Tucker. Viewing each aspect of his artistic output, visual or music, less as separate disciplines but more of as part of one connected whole – Tucker studied at the Slade School of Fine Art and has always drawn comparison between the layering of paint and the layering of sound – he explains: “There has always been a relationship between my music and visual practice. Subject matter crosses between each medium depending on where my current obsessions lie. There is a melancholia and sadness about the transitory aspects of our earthly lives, alongside a fascination with the beauty and inexplicable nature of existence.”

Continuing to carve out a space as one of Britain’s most forward-thinking songwriters, on Don’t Look Away, Tucker displays his distinctly honest vocals with subtle shifts through unexpected variations.