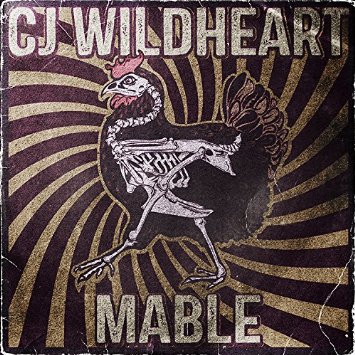 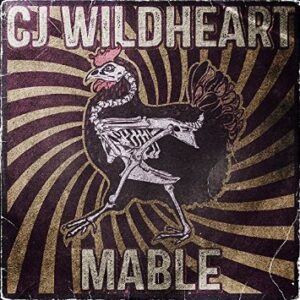 For the Wildhearts/Honeycrack/Jellies fans out there, it’s been a long time coming but CJ Wildheart’s debut solo album is finally here. So, it won’t surprise you to know that elements of all three bands are evident, but with a broader palette than before.

Like the ‘busiest man in rock’, Ginger Wildheart, CJ opted to fund the album via Pledge Music, so I’ve been listening to the downloads for a while prior to receiving the CD, with artwork devoted to his favourite hen, Mable. Yep, CJ’s left the city behind for a rural pace of life. The good news is that there are no odes to crop rotation or chemical toilets; in places, it rocks mightily.

Opener ‘Better Late Than Never’ mixes guitars and electronics, sounding like a slowed-down Jellies track. Given their love of amphetamine-fuelled tunes, this isn’t too surprising, and CJ’s cleaner lifestyle also benefits his tunes. Nice.

‘Down The Drain’ is, it must be said, the absolutely outstanding track. Sleazy riff, like a bubblegum Rob Zombie, the video is a cracker, with a geriatric Graham Parker-like busting his moves. Once you hear this song, you put it on repeat. Marilyn Manson, you used to write stuff this good. Well, almost.

‘Next To You’ is also catchy but in a poppier vein with typical playground melodies that CJ seems to specialise in. Some people were affronted to find him using drum machines/programming rather than live drums. I think there’s room for everything as long as it’s done well, which it certainly is here. And it’s not 1989 anymore.

‘Vitriol’ urges you to “keep your chin up” and battle against life’s trials. “Fuck the whole world and what everybody’s saying”. The organ/keyboard riff is very effective.

‘Always Believe Her’ really takes us back to prime-era Jellies. Having seen them several times, I see it as a good thing. A quick electro-pop blast with an intro seemingly from Camberwick Green, possibly a tribute to Mrs CJ. And why not?

‘Kentucky Fried’ has a similarly insistent melody. CJ took time away from music and ran his own cleaning company, which he recounts here to some degree. The frustration of the daily grind and the struggle to remain a decent human being, set to another earworm tune.

‘D.C’ has a stadium chorus with a darker verse. I’m not keen on Snow Patrol, but if they were any good, they’d sound like this.

‘Come With Me’ brings back the riff, with an eastern whiff. The chorus reminds me a little of Ginger at times, though CJ’s voice has it’s own character to carry it off.

‘State Of Emergency’ shows again that CJ knows how to craft a tune. There are about three catchy songs wrestling for dominance here, but somehow he pulls it off. I know, I’m using up my ‘catchy’ quota today, but it is a talent that CJ still has. He’s come back to music with a hunger to show what he can do.

‘Devil’ seems to be berating the coke-fuelled wannabe attitude of some areas of music, against a sinister electro-rock backdrop. “You gotta hook me up…”

Having been on both sides, it’s good to hear CJ on album closer ‘Midlife Crisis?’ taking stock of where he’s been and where he is now. “Can you see that it’s running away from you?”. It’s the light at the end of the tunnel; a song of hope, somewhere between The Wildhearts and Big Country tune wise. Sounds good to me.

I don’t know how many new ears CJ’s album will reach but it deserves an audience who appreciate a canny knack with a melody. He always was the nicest man in rock, an underrated title. It’s good to have him back, doing what he loves and doing it well.

‘Mable’ is out now via Pledge Music and on general release from August 4th.