The album is complete journey from beginning to end… 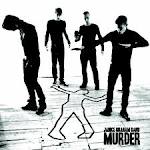 I’ve fallen in love, hook line and sinker with a band called Janice Graham Band, I first heard them around 2 years ago, they played my little city of Lancaster and immediately thought this band are gonna be big, they totally blew me away, since then i’ve seen them 7 times and never fail to impress me…their greatly anticipated mini (hardly mini, 14 tracks) concept album titled ‘It’s Not Me’ sung, written, played and produced by the band, 4 young lads from Manchester..no expensive producers, no fancy artwork, no Ã‚Â£1000 an hour recording studio just them and their instruments, their talent, innovation and uniqueness

The album is complete journey from beginning to end, a story even, with many twists and turns, diverse and dynamic … think of the weirdest craziest journey you have been on and times it by ten. Think Ska, Rap, Reggae, Punk, Indie, Dub, Soul, Jazz, Hip Hop, Dance, Rock ‘n’ Roll and Surf … this album contains all of those genres.

The opening track Thirty Pieces of Silver immediately makes your ears prick up, it gets your feet moving…the next track Hacienda starts off slow and menacing and ends up in a crescendo of anger and excitement and if your’e not dancing by now then there’s something wrong with you, the lyrics are genius, ‘Hacienda this, Hacienda that, thats the end of this, that’s the end of that. The album just gets better including their well known tracks No Money Honey, Murder and Front Door and new tracks never been heard called All In The Name, which has a dub reggae sound and Crazy Solitary Bingo, a chilled out summery jazz sound, pure brilliance. Machete is a wonderful short spoken word track with a dreamy trumpet sound. The tunes range from songs about love, murder, revenge, prison, it’s unpredictable with every track completely different from the next.

I’ve never been this excited about a band, ever.I’ve never heard an album so interchangeable, diverse, innovative and yet still pull it off as a brilliant. This album will make you sit up and listen, don’t be surprised if you end up dancing round your living room! this is no ‘background music’ album. Janice Graham Band, 4 young lads, no thrills, no pretentiousness, no flashy labels, no boosted egos, A unique band with an extraordinary talent who just write exceptionally good tunes. 10 out of 10.