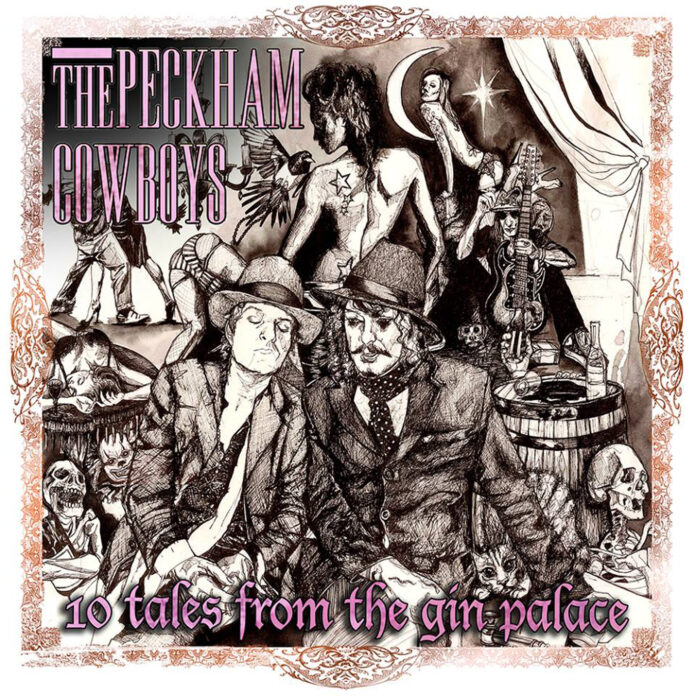 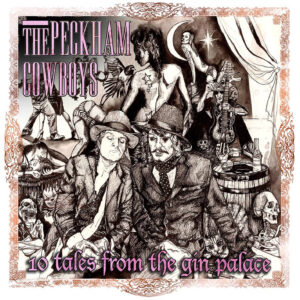 Tales From The Gin Palace

South London blues band The Peckham Cowboys finally release the follow-up to ‘Flog It!’; their 2011 debut.

I had listened to their first album with some interest, having been a long-time Quireboys follower and acquaintance going back to ‘Queerboys’ days. I must admit the debut was a shock to the ears; rock ‘n’ roll, yes, but decidedly lo-fi. Somehow it didn’t seem to suit Guy Bailey or his songs. I wanted something with more guts and, in all honesty, better production values.

It’s been a long wait, but The Peckham Cowboys have delivered the goods with ’10 Tales From The Gin Palace’. Bizarrely, Mr Bailey left the band prior to this recording, which revolves around vocalist Marc Eden and guitarist Dale Hodgkinson, ably supported by Timo Caltio on guitar (ex- Cherry Bombz/Cheap N Nasty) and a variety of musical friends. Their fluid line-up currently includes Nigel Mogg on bass, also previously of The Quireboys. And they sound like they’re having a blast.

We kick off with ‘Not Guilty!’; bar room bottles breaking against a story (loosely?) based around Eden’s recent court case, which he is understandably unable to give full details of. “They want to talk about 31 K, and all that cobblers that I did or didn’t say” he intones over a Stonesy riff complete with horn section from Duncan McKay (Primal Scream). “I’m not guilty! Well, not this time”.

‘Bromley Girls’ follows in a similar sleazy vein. They do it well; this stuff can sound very laboured, but the band sound like they’re having fun. Think Quireboys but with a young Zodiac Mindwarp’s lust-fuelled way with words. And often with a refreshing London accent.

‘The Debt Collector’ brings a reggae-tinged tune, lightly handled, thankfully. Reggae / rock is not often done well in my opinion.

‘Don’t Damn The Hypnotist’ continues in a dub style, slowing things down. The horns are almost reminiscent of The Specials. High praise.

‘Quarantined’ has a rougher feel to the mix, seemingly deliberately so. Stinging guitars trade licks with harmonica and horns.

‘Poor Boy Blues’ wrings out another bluesy riff, low-slung and dirty. Like it should be. A harmonica-soaked work out.

‘You’re Only In It For The Money’ wrong foots me; still rough and ready but with a radio-friendly tune. Sort of. It explains why Slash originally asked Eden to audition for the fledgling Velvet Revolver.

‘She Was Sweet On Me’ returns us to familiar Keef-style territory, but the strings add a touch of prime era Bolan. A clever mixture. Simple and effective.

‘Cut It Out’ keeps the good times coming, while berating the naysayers and critics. A short but snappy number.

‘Knocked Senseless’ ends the album in fine style. Tales of debauchery to a tune I know I’ve heard many times before, but this is as good as any of them. The kind of thing Tyla’s Dogs used to excel at. This must be great live. I’ll have to find out.

So, a welcome surprise. I have, like many of you, heard these kinds of songs so many times before. It’s hard to find a band who make it sound fresh, fun and inviting. They could well be the pride of Peckham. Triffic.

All words by Martin Haslam. More work by Martin can be found in his Louder Than War author’s archive.