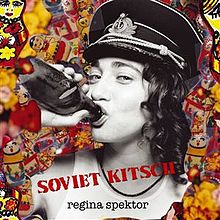 With ‘deep listening’ album listening parties, and rediscoveries being a key musical part of the current isolation, I’ll be writing numerous reappraisals over the coming months of albums I haven’t previously written about worth exploring. Today – Regina Spektor’s third album Soviet Kitsch.

It’s the summer of 2004, and most major labels are falling over themselves to find cookie-cutter gangs of boys to chase the summer sales market. So…what’s this latest release from Sire, to the unassuming? Soviet Kitsch, wrapped in the wryly knowing sleeve art of its Russian-born creator in traditional Soviet headwear over all the tropes of Russian imagery, opens with a heartbeat that gives way to a melodically sung, piano-led Ode to Divorce, which draws parallels between relationship status and taste sensation in a way which echoes Margaret Atwood’s classic Seventies feminist novel The Edible Woman…

Soviet Kitsch, Spektor’s third album, was originally released in 2003, but then re-released by Sire in 2004 and was thus many people’s introduction to her quirky, lo-fi, lyrically unique style. Of course, riding the wave of Noughties scene cool and connections could not have hurt – much of the buzz around Spektor has stemmed from her support slots for The Strokes and Soviet Kitsch, was another credit to their producer Gordon Rapheal. Anyone discovering Spektor through music press headlines dubbing her The Strokes mate, would quickly find there was significantly more to her, of course.

The track that will have introduced most people to Soviet Kitsch is Us, one of Spektor’s finest hours, which follows the flow of the rest of the album but pulls away from the wry humour and pidgin English playfulness to build a modern masterpiece of oblique storytelling. Haunting strings and heartfelt pianos lie as backdrop to a lyrics about how “They built a statue of us/the tourists come and stare at us”, amongst a wrecked city (“Named after us…and they tell us its all our fault”) struggling for answers. Whether its all a metaphor for the shrinking world the glories of being in love provides, or a very literal reflection of love borne against a backdrop of revolution, its this open-to-interpretation nature that makes much of Soviet Kitsch really quite special. The traditions of romance mixed with death, decay and ruin sit as consistently twinned themes on Soviet Kitsch – titles like The Flowers, implying that commonly occurring emblem of beauty and love, focuses more on them rotting and fading away than in their bloom, in line with the death of a relationship rather than its life, which is perhaps something to be expected from anyone who opens their album with an ode to divorce. Relationship woes occur throughout, but in something far from the traditional break-up album. Your Honour, a collaboration with Kill Kenada, is an unexpected assault right in the middle of the album describing the bloodied nature of argument, with that clever pidgin English and playfulness with language seeing Spektor draw conclusions about the improbability of a stake for your eye… ”Because I’m a vegetarian so it’s a frozen pizza pie.”

What this mix of language and imagery do together is pull a lot of focus on storytelling, often featuring unsympathetic characters, such as the loveless antihero of Poor Little Rich Boy, or cog of capitalism in The Ghost of Corporate Future, another one of her most lyrically clever moments, starting with one mans day to day life and misfortune before turning him into a kind of emblem for how we should be seeing the world and what could come next. It’s a song that feels of enormous relevance, years later, and will continue to do so, rolling out clever observation after clever observation with a mix of message and that re-occurring wry humour, distilling pretty much the whole album. So for anyone wanting to discover something that feels as fresh and relevant as the day it was released, there’s never been a better time to give your ears to Soviet Kitsch.