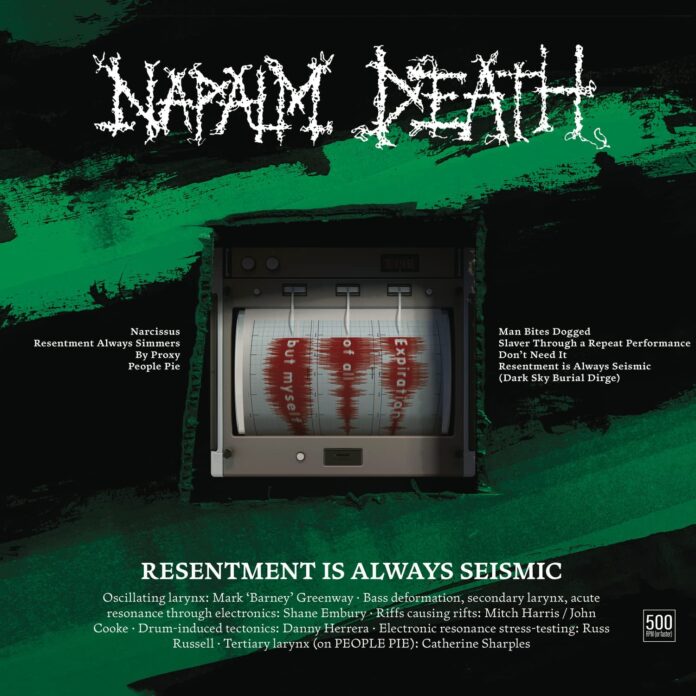 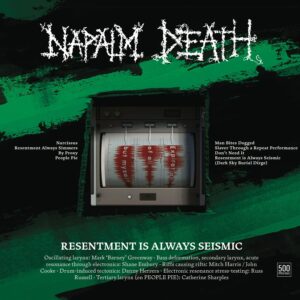 Napalm Death, the gods of grind are on a bit of a roll and Resentment Is Always Seismic has them serving us another slab of chaotic industrial grind. Get it while it’s hot.

I remember first going to see Napalm Death with my mates in Leicester at the Princess Charlotte in 1990. Sadly, the Charlotte closed in 2010, but Napalm Death managed to stay the course. As a sixteen-year-old, I wasn’t quite prepared for the Napalm live show that night. Mostly I remember the band coming out, spotting Shame Embury’s huge hair and then it was like someone had turned the room upside down, there were kids, beer and body parts all over the place. After ten minutes or so, I re-grouped at the bar and watched the rest of the show. I’d always loved extreme music, but suddenly it made total sense. You could taste the energy in the air, it was cathartic like nothing else.

Napalm Death, like any band whose career spans so much time, have a mixed back catalog, but Throes of Joy in the Jaws of Defeatism in 2020 was a stunning return to form for me and Resentment Is Always Seismic is made of tracks taken from those writing and recording sessions, so it’s no wonder they have the same brutal energy.

Resentment Is Always Seismic starts with Narcissus, we’ve played this a few times on the Louder Than War Radio Metal show, The Monster Shop. A thundering distorted bassline leads into Narcissus, the calm before the storm, a storm that is on fire, with knives and guns and is quite angry. Resentment Always Simmers is up next, a chanting intro lulls you into a massive serving of industrial grind that is a reminder that Napalm Death don’t need to be running at full speed to rip your face off.

The rest of the record is an absolute masterclass in extreme metal. There isn’t a weak song here. The album closes out with a cover of Bad Brains Don’t Need It, which not many bands could pull off and a remix of Resentment Always Simmers by Shane Embury, which takes the track down an altogether darker and more industrial path.

As extreme metal records go, this is up there with the best. Clearly not for the Adele fans out there, but if your taste is a little more on the extreme end, this could be right up your street!